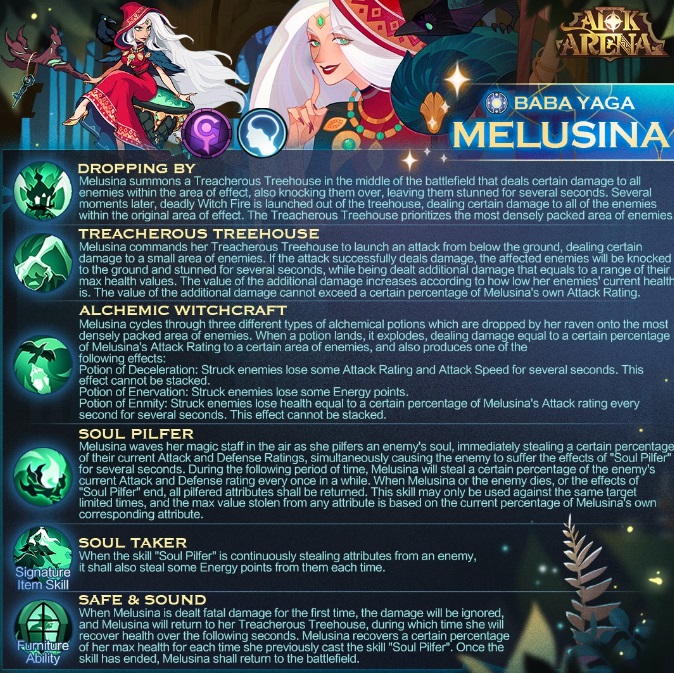 0: Soul Steal will also steal 30pts of energy/s from the debuffed enemy 10: Increased to 40pts/second 20: When soul steal is applied to an enemy, it will immediately steal 80 energy. 30: When soul steal debuff wears off, Baba will permanently keep 20% of the stolen stat values. No wording of limits, likely can stack on top of each other. (this is gonna be 100% required. daimon style scaling)

3: When Baba takes a lethal hit for the first time, she will be moved to her special hut for 5s during this time she is

9: Baba can also continue to regenerate energy while she regens health in the healing hut

(her 3 and 9 seem incredibly good)

Please note there might be typos or things I might have misinterpreted, this isn’t meant to be a perfect match but a very close one as this is based off of official screens of the hero in game on Chinese server. Enjoy

Edit: something to note is that the first entry is her ult which also does aoe max health% damage. Usually these types of attacks are capped at a high attack% even if they don’t list it. Since Baba 30 permanently scales herself with enemy stats, that ult %health damage could easily hit some really high numbers. If this is the case she will prob synergize well with heroes that group enemies up and have good survivability while she ramps. It’s all going to depend on how she plays out though. I can see her being an extremely strong and safe scaling mage or I can also see her intended to be a CC/debuff/scaling subdps. Will depend on her final numbers once we get to test her. Think it looks very promising though!