Compared to the conventional faction-based PvP game, Among Gods allows for a more flexible combination of playable Heroes. To receive an ATK and HP Bonus, you must have three to five members of the same faction on the field at once.

First of all, please stay as far away from the 2+2+1 Hero lineup as you can in order to correctly activate the extra effect. After all, the difference between +10% and no bonus is still fairly large.

Now that you know how to get those Faction Bonuses, we’ll continue to demonstrate today how to fast boost the Battle Power of your team.

Priorities first! To significantly improve a Hero’s Battle Power, raise their and rather than their level.
To get extra gear, take part in as many Heroic Crusades as you can.

Afterward, equip it and give your DPS’s weapon the highest possible star rating. DMG and Battle Power of the Hero will be directly impacted by this. 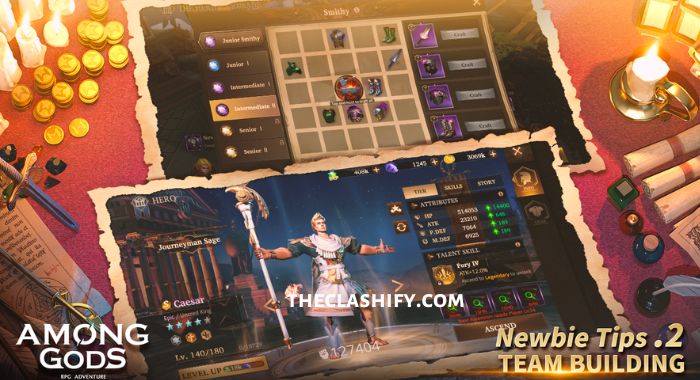 Third, attempt to defeat Stonehenge as frequently as you can to get more Holy Relic Components. Your team will also receive a significant Battle Power boost if you keep acquiring and improving Holy Relics.

Finally, to unlock more Guild Tech, take on the Guild Boss every day.
Hero Bonds, Glyphs, and Astrolabes can also aid in your team’s acquisition of a significant Battle Power bonus.

Remember that a team’s Total Battle Power is influenced by a variety of things.

By now, I’m sure everyone has called forth some formidable Heroes. Today, we’ll give you some pointers on how to make the most of a unique feature—the Knights!

Therefore: 1. Create Heroes that can “achieve max star ratings easier” based on your own party’s makeup. 2. Put some A-Class heroes with the highest star ratings in the Knights position so that they can free up other Heroes for Stonehenge. The Trial of Truth, and the Advanced Arena.

2. Give your most-used Hero’s bond activation priority, and increase their Bond level as much as you can (either by improving the Hero’s star rating yourself or by hiring a Hero from your friends/guild).

3. You can borrow up to 8 Heroes from your friends/guild.