.1. Madara: Top tier Mythical, having really amazing damage, incredible range, and big cone AOE. The most versatile mythical in the game for any game mode. (Mythical)

.2. Broly: Amazing DPS, Range, and Full AOE. Cooldown roughly around Madara’s. Cost is expensive, so I suggest prioritize getting a money unit then this. (Mythical)

.3. Dio: Upgrade turns attack to Timestop, paired with overall amazing stats with spa slightly high, but the TS makes up. This unit is versatile with any build. (Legendary)

.4. All might: The most balanced mythical in the game, really good damage with good range. The Bubble AOE can cover up most of an enemies which makes him cost efficient. (Mythical)

.5. Erwin: The best buff and summon unit. It gives a 25% DMG boost to units in range, as well as summoning a unit with 1k HP every 10 seconds which will grant a huge coverage. (Legendary)

.6. Bulma: The best money unit currently. Can make up to 8k a round, Useful for when using expensive units. (Legendary)

.7. Diavolo: Really high DPS, single target. Erased time ability is extremely helpful in infinite mode. This unit is mostly good in infinite mode. Story mode can be done with, but not best with. (Mythical),.ml;/=

.9. Pain: His ability pushback is very helpful any game mode, stats are lacking in DPS and kind of expensive cost, his large AOE and op ability makes up for it. One flaw with his ability is that it hits a limited amount, only a few. Can push back bosses. (Legendary)

.11. Levi: The best support DPS unit. Amazing DPS, SPA, and range. Only downfall, is that his AOE cone is too small. He’s a supporting unit that can help kill bosses but not a main unit that can carry you. (Mythical)

.12. Giorno: Overall balanced legendary. Good stats all around. DPS is amazing, as well as range, SPA and cost. No ability but a really well rounded legendary. (Legendary)

.13. Itachi: Stats are very similar to Goku Black which is mediocre. Only thing that makes him better is his dark flames that does burn. Very underwhelming for a legendary. (Legendary)

.14. Armin: Worst Mythical in the game due to his bad ability and bad damage output. He attacks every 60 seconds with an ability with a huge full AOE cone. Having around 5k DPS attacking every 60 seconds is heavily underwhelming. (Mythical)

.15. Goku Black: His stats are very mediocre. He has good AOE cone, range and SPA but his DPS output is one of the worst paired with his other stats. Underwhelming unit. (Legendary)

.16. Eren: Having Erwin introduced made Eren practically useless. Eren minions have bad hp, attack titan is not massively better. Erwin is all around better. (Legendary)

.17. Dabi: The worst unit in this tier list. He has very underwhelming stats. Bad DPS, range, high spa with a big AOE circle. Although the AOE circle is big, it does not win over to how bad his stats are. (Legendary)

All units have been tested 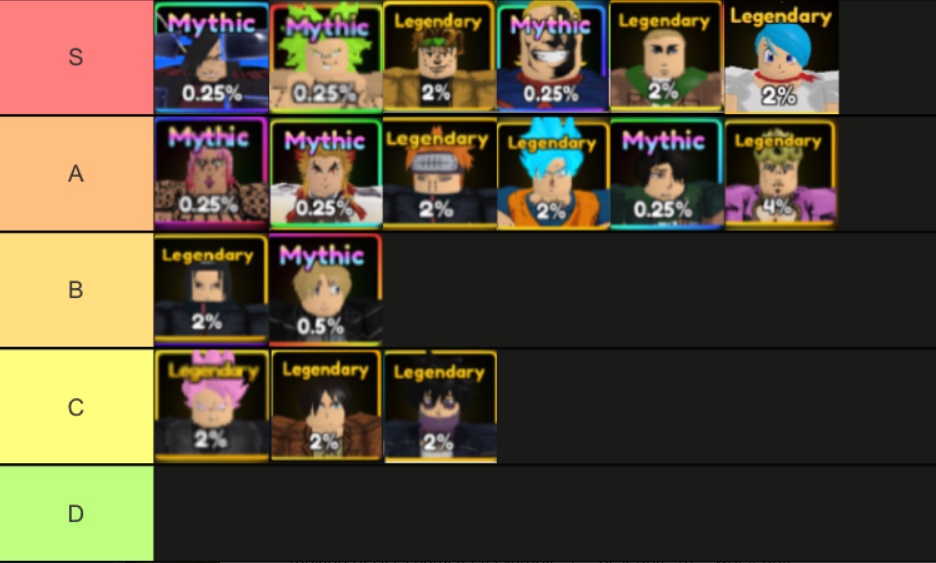 Ranking all Epics overall. Rares will not be included in this tier list since most of them are useless/unusable. However there will be 3 rare units in this tier list which I find are good and useable. (Numbers will determine their overall ranking through all EPICS AND RARES ONLY). Example: 1 = best unit, 17 = worst unit.

All units have been tested