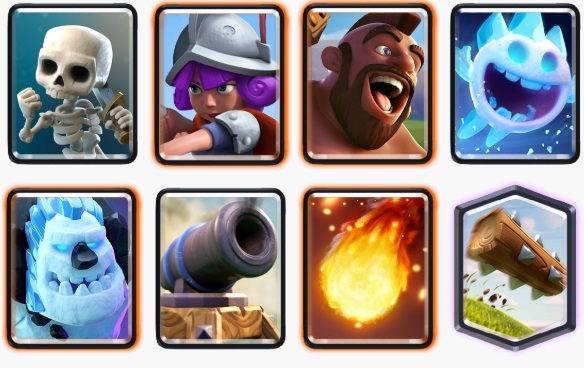 In hog 2.6 Deck, The first 1 minute is early game, and next 1 minute if mid-game, and the last minute/overtime is late game. There is a key reason why there are three exact phases to this deck.

Early game You are trying to figure out your opponent’s deck, as well as trying to get as much damage as you with your hog rider. The early game includes the Starting hand’s explanation in the first part of this entire 2.6 guide, so take a look at that section for reference. After you figure out of opponent’s deck, the game goes into the mid game, which is usually 50 seconds into the match to 1 minute into the match

You Main push miner to back of tower and wall breakers at bridge and Wall Breakers are great opening play if you have them in the cycle, Miner also important to use to help get chip damage throughout the match. Against bait decks you might need to use this guy to snipe the princess, In double elixir you can start to use your spells to support your miner More Decks »

This deck takes a lot of practice because one wrong move and you are completely screwed over, so play it slow save you Mini Pekka and Musketeers for Defence and use these both card very carefully.

The gameplan is very simple and you just have to Support your P.E.K.K.A by using Megic Archer and E Wiz to deal with supporting troops while damaging the tank, or just cut them off with Bandit or Royal Ghost Thanks for reading guys these are Nery Elixir Extravaganza Challenge Deck