Hi guys, today I will show you Brawl Stars Edgar Guide 2021 and How to Use Edgar in Brawl Stars. A few days ago I saw this post on Reddit made by u/A_Cool_Guy_123.  This Edgar guide will help you improve your gameplay with Edgar.

Without further ado let us take a look at this amazing Edgar guide made by u/A_Cool_Guy_123.

Edgar is an Assassin Brawler with Epic Rarity, and short-range. He has moderate damage and health, and he attacks with two quick punches with his scarf, with an extremely fast unload and reload speed. He also heals for 25% of the damage dealt per hit.

Edgar gives enemies two punches with his scarf at a really short range. When attacking someone successfully, he heals 25% of the total damage.

“Hits enemies with quick punches, healing himself for each landed punch”

Edgar jumps into the air and lands on the ground. On landing, he gets a speed boost for 2.5 seconds.

“Edgar jumps over any obstacle and gets a temporary speed boost. His Super will slowly charge over time”

Enemies in a 3 Tile radius around Edgar’s landing will recieve 1000 damage. 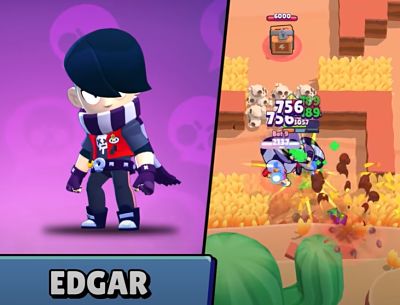 Edgar is one of the best brawlers of the game, he is fast, deals a lot of damage in some seconds, and has life. First, you need to know how to pressure enemies. It’s really simple, corner every enemy you can (well, do not try to corner a Bull or a Rosa with Super, you will die). Edgar is good in some game modes, here are tips for some modes:

How to Play Edgar in Solo Showdown:

After getting some cubes, camp, yes, I know it is toxic, but camp, do not team too much, it is more toxic than bush camping. Wait for the toxic clouds to come and push to center bushes and try to defeat some brawlers.

If two people are fighting, when someone defeats the other, use your Super on them, it will be easy to defeat the survivors of the battle, they do not have too much health after fighting 1v1 so get the moment and enjoy the opportunity to kill them. Friendly tip: Do not jump on Dynamikes, they kill me every time I try to jump on them 🙂

How to Play Edgar in Duo Showdown:

Edgar and Colt or Edgar and Byron are good duos. Take some cubes and use your gadget, jump in the middle of a fight with your teammate support, you can easily defeat a duo.

Try to team with the resting duos (it is toxic, I know, I said it, but it is necessary), when the toxic clouds get closer, betray the weakest duo and defeat them, then try to defeat the last duo.

How to Play Edgar in Brawl Ball:

The best goalkeeper possible is Edgar, usually, community Map Maker winners’ maps are Super Narrow or Real Football, use Edgar as a goalkeeper, and beware of the Franks.

In normal maps, right on the begging use your gadget, wait for your Supercharge, and jump on enemies. Try to jump on enemies that have important abilities for the enemy team, like Sprout or Lou (beware of Lou’s gadget). Put pressure on the enemy team, so your teammates can move forward than try to kill everyone and score 🙂 try to do the same thing after scoring.

On defending a goal, guarantee a charged Super with your gadget and jump in the enemy with the ball, so your teammates can attack the other enemies to prevent the guy who is with the ball to pass to his mates.

How to Play Edgar in Siege:

Take some bolts and use your gadget right in the beginning, if the enemy team assembly a Siege Bot, face it and try to knock it down!

If your team assembly a Siege Bot, use your Super to jump on IKE Turret (but wait for your Siege Bot to arrive on opponents’ IKE Turret).

You can also jump on enemies near to the Siege Bot, prevent them to knock your Bot out then just wait for to it arrives on IKE Turret and deal damage :). Do this in other buildings too, but change your attack strategy.