How to Capture Flying Mounts in Chimeraland (Guide)

Hi guys, Welcome back to another Chimeraland Guide, This How to Capture Flying Mounts in Chimeraland guide is shared by DrunkLord, Are you new to the game and tired of riding your horse to get around the continent? Want to take off into the skies instead of being bound to the ground?

Here’s a guide for you on how to capture flying mounts and How to Find Flying Mounts in Chimeraland Let’s start with the basic flying mount (and the slowest ) which is the Beetlefly. 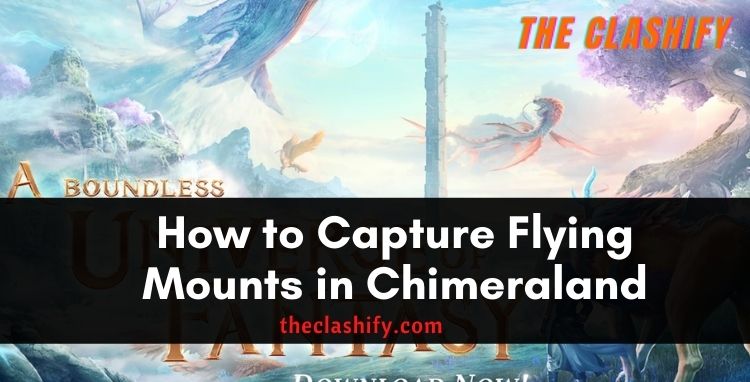 How to Capture Flying Mounts in Chimeraland

Beetleflies are the slowest yet easy to obtain the flying mount. They can be found in the forests near water banks like rivers or waterfalls. In order to capture one, you’ll have to use a crossbow to whittle their health to 10% and use your capture bow on it. Of course, it’s not going to be a Beetlefly egg on your first try (Unless you’re lucky), but you can use their temp to make your mounts devour them and have a chance to obtain beetle fly wings trust me, it’s really fun.

The thing about beetle flies however is that they fly really slowly, but their flight is sustained mid-air which means you can stay at the same altitude for as long as you want. This is useful for attacking land mounts from above without the risk of you falling down.

Now the next mount is a bit harder to catch. If you want a mount that flies really quickly then Vultures are your go-to. They can usually be found in open spaces like deserts, prairies, and mountains. A regular Vulture is around LVL 30-35 but they can be beaten by green tier weapons. I advise you to use long-ranged weapons like the Bow for high damage output and homing arrows then use a crossbow to whittle their health by 10% when they’re about to die so you can capture them. The chance to get a Vulture egg is around 30% percent so you’re going to get a lot of temp Vulture when you’re trying to capture one but it’s going to be worth it.

Last but not least, are the Condors. They’re big and magnificent birds that come in 3 colors. Black, White, and Brown, all of which can be found in their respective habitats. White or Snow Condors can be found at the top of snow mountains, they’re really pretty looking but they’re around LVL 40-45 so hunting them with your friends is a must if you’re still around LVL 15 but once you hit Lvl 20, you can hunt them on your own without a scratch as long as you have good weapons. Lvl 1 Capture Bow can’t catch a Condor because it can only catch beasts between LVL 1-35 but a Lvl 2 Bow can catch between LVL 1-45.

Their flight controls are similar to the Vulture so if you’ve ever ridden one, it’s gonna be easy for you to fly one. The Condors fly at an incredible speed, you can truly explore Chimeraland once you’ve got your hands on one. But that’s not all though, there are more flying mounts scattered throughout the world, and possibly stronger than these 3.

Now that you’ve mastered capturing these mounts, you can now go catch greater beasts and explore Chimeraland in style. Good luck Traveler, and have a wonderful hunt!