Hi guys, I will show you Clash Royale Rage Tournament Deck 2022, You can use all these decks in challenge and tournaments, In the Rage Challenge, so come and take a look at these best decks for Rage Tournament 2022 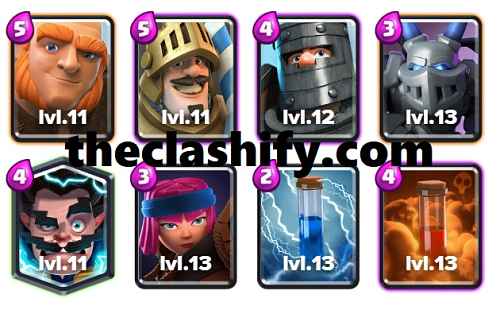 Giant: Your win condition, and main tank. The Giant is amazing for what it offers, it costs one more elixir than a Hog Rider, Pair him with a Firecrackers to wipe out swarms, and he can push his way through enemy defenses, He is a great tank and really does well at smacking down towers.You can throw him in front of a counter-push or start up a big push in the back around him Continue Reading »

Prince – Counter pushing is the name of the game with the card.Ever since his buff, he has seen lots of popularity and has been paired with tanks ever since.He is as an amazing card on offensive card as well as defense, able to take care of countless threats!

Use him defensively to take care of heavy tanks and support by placing him behind the tank, allowing him to take care of the supports then charge over to the tank and take it down with ease Continue Reading »

Lumberjack – Now one of the strongest cards, the Lumberjack is perfect for defending against troops like the miner, or even tanker cards like the giant (if there is enough time). If you defend with him and you have the elixir to spare, try pairing him up with the musketeer and the ice spirit to try and get some damage on towers before 2x elixir. Not only does he swing ridiculously quickly, his movement speed is very fast, meaning your opponent is going to have to think quickly if they want to defend against him. That, paired up with his death-rate can make for some really fun combos Continue Reading »

Usually, you don’t want to start first so you should wait a few seconds at 10 elixir and respond appropriately if the opponent doesn’t play a card by 2:42 this usually rules out cycle decks so you can cycle something.

Good opening cards are mega minion, dark prince and miner, but i don’t like starting with the miner on the off chance the opponent has a pump, but if you do, play him in the safe space until you are certain opponent has no tornado Continue Reading »

Thanks for reading, have fun, we will update this page with more Rage Tournament Deck 2022 for Season 31