Clans compete for Capital Gold, which can be used to upgrade and improve your Capital, as well as Raid Medals, which can be used to buy goods for your own Village. You’ll also be able to buy reinforcement Troops without waiting for your Clanmates to provide them. Also, See – Top 23 Clash Royale 20 Wins Challenge Deck 2023

How do we go to Clan Capital?

The Clan Capital will be accessible to Clans that are Level 2 or higher. Once your Clan reaches this requirement, your Clan will unlock the ability to travel to the Capital. Furthermore, your Village must be Town Hall level 6 or higher in order to enter the Capital.

Just click the Air Ship next to the Builder Base boat and it will send you high into the clouds to a distant new land for your Clan to explore! Also, See – Top 23 Clash Royale 20 Wins Challenge Deck 2023

Each Clan’s Capital is comprised of a series of different Districts. Each District features its own unique theme with unique aesthetics, Defenses, Troops, and function to give the Districts their own distinct feel. Because each District is different, how you conquer enemy Districts will depend on your attack strategies. So coordinating attacks with your Clan is essential if you want to ensure the best success during a Raid Weekend.

In this update we are introducing a couple new resources: Capital Gold and Raid Medals. Capital Gold is a brand new currency you’ll need in order to restore Ruins and upgrade your Capital Buildings. When you unlock a brand new District, instead of purchasing Buildings, Walls, Defenses, Traps, etc. you’ll find your recently unlocked District to be covered in ancient Ruins. Spending Capital Gold on these Ruins will allow you to build specific Capital Buildings and Defenses. Upgrading your Capital with Clan Gold is instantaneous with no upgrade time! 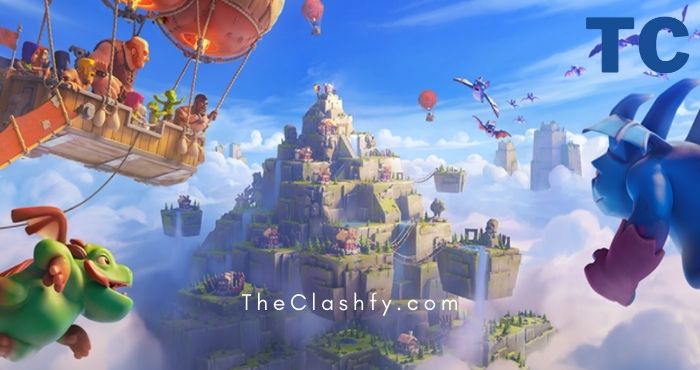 The Forge is a brand new building that unlocks at Town Hall level 6 and you’ll find the Forge next to the Air Ship that takes you to your Clan Capital. This structure allows you to manufacture and collect small amounts of Capital Gold, the resource needed to upgrade your Capital buildings, every day. Additionally, high-level Town Hall players will be able to assign Builders in order to exchange resources for Capital Gold, which means you will need a free Builder to convert resources into Capital Gold. Additionally, the Builder Boost from the Gold Pass as well as Builder Potions will speed up and reduce the time required to craft Capital Gold at the Forge. You can also complete a Capital Gold conversion in progress by using Gems.

Capital Gold is one of the rewards for participating in Clan Capital Raids. We’ll share more on that information later.

With Capital Gold being a brand new resource, we’ll make sure there’ll be opportunities to earn Capital Gold through Season Challenges and other events.

When you visit your Clan Capital, there is no Shop to purchase Buildings, Defenses, Traps, etc. Most purchasable and upgradeable Buildings start off as moss-covered Ruins. All Ruins are visible in each District and will denote what kind of Building will be unlocked when the Ruins are restored, whether it’s a new kind of Barrack that unlocks a specific Troop or a new Capital Defense that aids in protecting your Clan’s massive Districts. Some Ruins even unlock moveable decorations!

The more you contribute to your Clan Capital, you will be rewarded with a new XP type system called Reputation. It’s a good way to keep track of who has contributed the most to your Clan’s Capital.

Players can contribute whatever amount of Capital Gold they have. When the required amount is reached, the Ancient Builder will instantly upgrade the Building. However, be aware that the Builder Boost from the Gold Pass does NOT reduce the Capital Gold price for restoring Ruins and upgrading Buildings in the Clan Capital.

Capital Raids are epic battles where you can test your entire Clan’s might against an enemy’s Capital. As we stated above, in the Clan Capital, Clans build together and battle together – and it’s never more true than during Capital Raids.

Capital Raids will occur over the weekend. Raid Weekends are expected to begin every Friday and will end on the following Monday. Collectively called “Raid Weekends” your Clan will engage in epic battles to conquer as many Districts and Capitals as possible, earning Capital Gold and Raid Medals as rewards.

Clan Leaders and Co-Leaders can opt your Clan in to participate in a Raid Weekend. If your Clan is opted in, when the Raid Weekend begins your Clan will be matched against another Clan Capital. However, Raid Weekends are not directed head-to-head battles where your opposing Clan is attacking your Capital. Think of it more like normal Multiplayer matches where you attack another player’s base but they aren’t attacking yours.

Damage during a Capital Raid is persistent. This means when you attack a District and don’t destroy it, your Clanmate will be able to pick up right where you left off. For example, if you were able to get a 50% 2-Star score on your Raid attack, when your Clanmate attacks that same District they will start off at 50% 2-Stars already on the scoreboard.

Additionally, Traps will not re-arm between attacks. So any Traps that were triggered by a previous attack will remain triggered.

Finally, Spells will also remain for one attack after they are cast. For example, if you drop a Healing Spell, when your Clanmate attacks next that Healing Spell will still be on the ground for your Clanmate’s attack.

Each player will have 5 attacks over the course of the entire Raid Weekend. If a player manages to destroy a District, you will earn a one-time reward of a Bonus Attack. You can earn only ONE Bonus Attack per Raid Weekend.

Destroying Buildings will reward players with Capital Gold. Only destroyed Buildings will yield Capital Gold. If you are the player to destroy a District, any remaining Troops (whether they’ve been deployed or not) will also net you additional Capital Gold. The total reward is calculated on the housing space total of the Troops.

When your Clan manages to completely destroy all the Districts including the Capital Peak, your Clan will be given another Clan Capital to destroy. At the end of the Raid Weekend, players who participated in the Raid will earn Raid Medals based on the destroyed Districts and how well their Districts managed to defend against enemy attacks.

Once you are locked in to a Raid Weekend, you are not able to participate in another Clan’s Raid until the weekend is over.

Matchmaking is based on the levels of the Buildings in the Capital.

Every Clan member will have access to the Troops and Spells unlocked in your Clan’s Capital regardless of Town Hall level or rank. If your Clan unlocks Super Dragons in the Dragon Cliffs District, everyone in your Clan will be able to train Super Dragons for Capital battles.

The level of the Troops and Spells is determined by the level of Barrack/Spell Factory in your Capital. So it’s important to coordinate with your Clan on a strategy that works best to defeat different Districts. Should the first attack open with Hog Raiders to create a funnel? Or should they lead with Super Wizards and take out as many Defenses as possible, allowing your Clanmate to deliver the finishing blow with a mass Battle Ram attack?

Your Home Village and Builder Base Heroes are not available in the Clan Capital.

When you attack an enemy’s Capital, you won’t be able to immediately attack the Capital Peak to deliver a decapitating strike. You will need to work your way up through all of the other Districts and destroy them before you can make an attempt on the Capital Peak. Each District will likely require the coordination of multiple players as it will be challenging for a single player to 3-Star a District on their own without using all of their available attacks. Coordination is key.

As mentioned above, damage to a District is persistent between attacks meaning your attacks will pick up where the previous attacker left off. Spells will also remain persistent for one additional attack after they’ve been cast.

The layout of your Clan’s Capital can be edited in the Clan Capital Layout Editor. Only your Clan’s Leader and Co-Leaders will have the authority to modify the layout of your Capital Districts. Any changes made to the layout during a Raid Weekend will not go into effect until the Raid is over. Therefore, once your Clan has created a Capital layout, any changes made to your Capital layout during a Raid Weekend won’t go into effect for any ongoing Defensive Raids. However, changes will be applied during any possible future Raids.

At the end of the Raid Weekend, your Clan will earn Raid Medals based on how well your Defenses held up against enemy attacks. So if you have a talented base builder in your Clan, this is their time to shine!

We’ve designed an armory worth of unique and new Defenses for your Clan Capital. Some will seem familiar like Giant Cannons and some are completely brand new like Blast Bow and Rocket Artillery. Check out what your enemies will be facing when you’ve unlocked all the Defenses.

Each District will have unique mechanics based on the terrain of the District map. 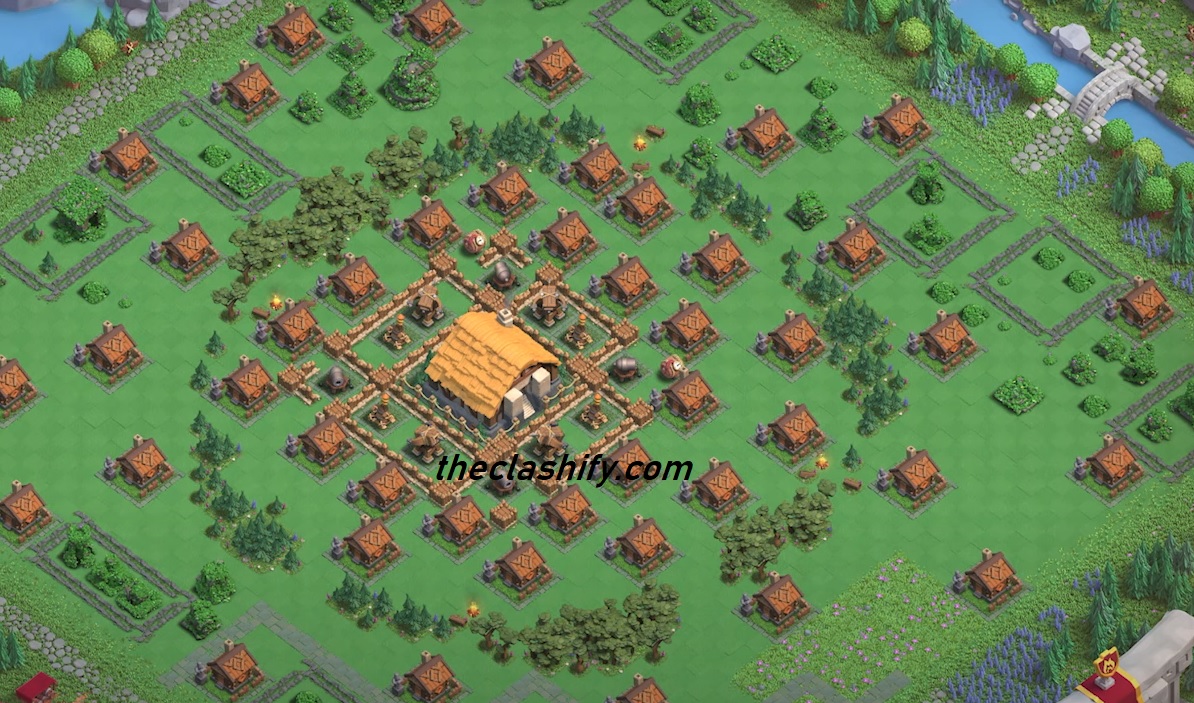 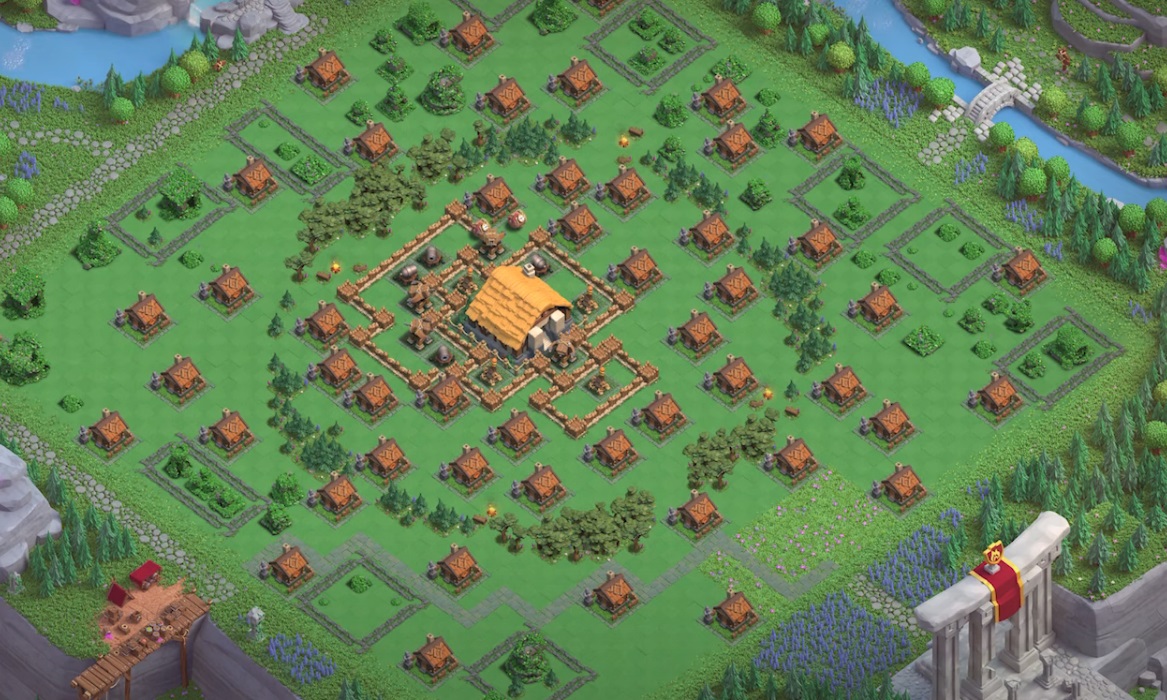 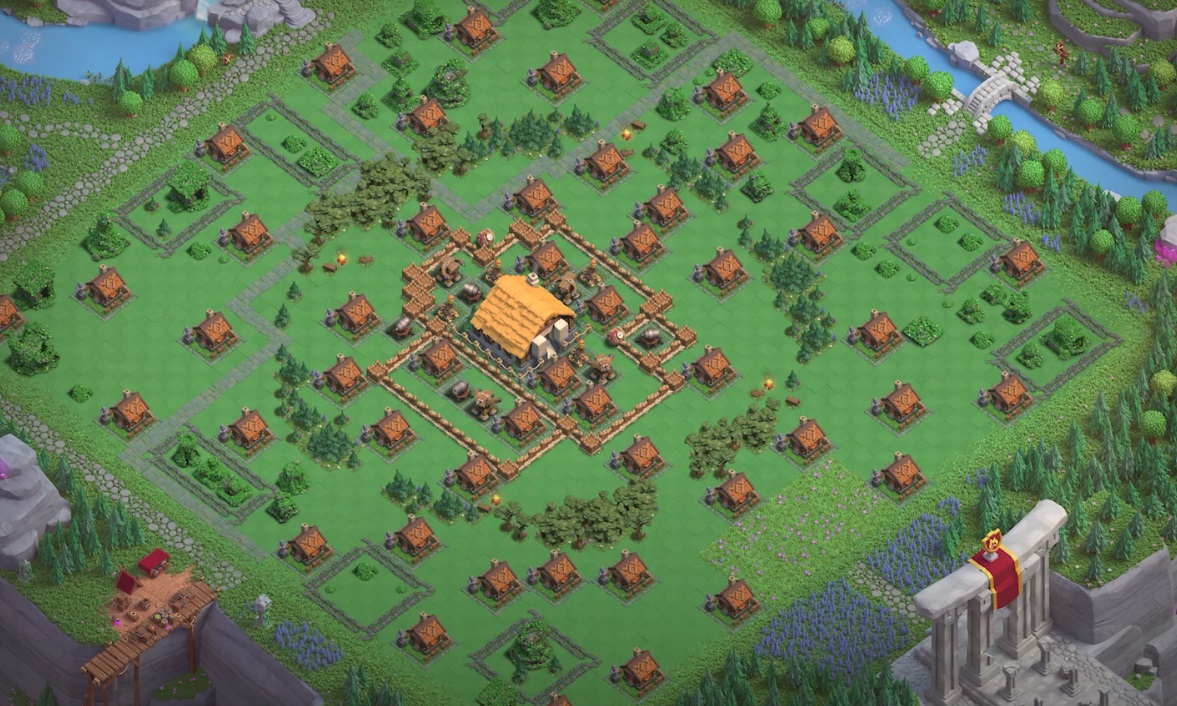 Capital Hall 2 Base Layout (CH2 Base)

Capital Hall 2 Base Layout (CH2 Base)