Deep Rock Galactic’s Research and Development division (referred to as RnD for brevity’s sake) is tasked with researching new technologies and methods for improving mining and combat efficiency, along with researching ways to improve existing technologies. When not working on mandated research, RnD will often explore other scientific avenues when it has time, foraying deep into the fields of biology, physics, and contemporary geology.

Aside from the impressive volume of expensive ores to be found under the surface, Hoxxes offers many fascinating opportunities for furthering modern science. The hardy and complex biology of Hoxxes is especially fascinating. Management has approved RnD’s suggestion to instate a Secondary Objective system to assist with the acquisition of samples and research data from the planet.

Moreover, it removes the need for researchers to travel down to Hoxxes to collect the samples on their own, which saves RnD much of its needed manpower. As of now, researchers are not allowed to foray into the depths of Hoxxes for their work due to the danger its native inhabitants pose–as such, the Secondary Objectives system offers a much-needed and -preferred outlet for analyzing the planet in peace.

Dwarves traveling down to Hoxxes for work may receive a bonus sum of credits and personal resources for completing Secondary Objectives while on the job. This guide will provide information on all of the current Secondary Objectives available and how to complete them in an efficient manner.

While not strictly required to complete, Secondary Objectives provide a bonus stipend of credits for miners and help advance RnD’s research efforts for Hoxxes. In general, Secondary Objectives are best completed before the main objective in a manner that does not add too extensively to the amount of time spent on the surface of Hoxxes.

This is mainly to minimize the number of resources wasted on a single mission in Hoxxes, and ultimately helps to keep your fellow Dwarves from getting bored wanting to return to the Space Rig. In short, do the Secondary Objective if possible, but do not go out of your way to complete it! Time is money for DRG; spend it wisely!

The Scout’s Grappling Hook enables them to quickly reach low-access areas while still allowing them to zip back to their teammates when things get dicey. If you are trying to reach an object on a wall, the Grappling Hook can be a quick and efficient way of acquiring such materials as required and able.

This section of the guide goes over the specific Secondary Objective materials you may be assigned to acquire while on the job. The Secondary Objectives listed here are simple grab-and-deposit objectives; once you find one of these objects, collect it and deposit it wherever you would deposit your ores. 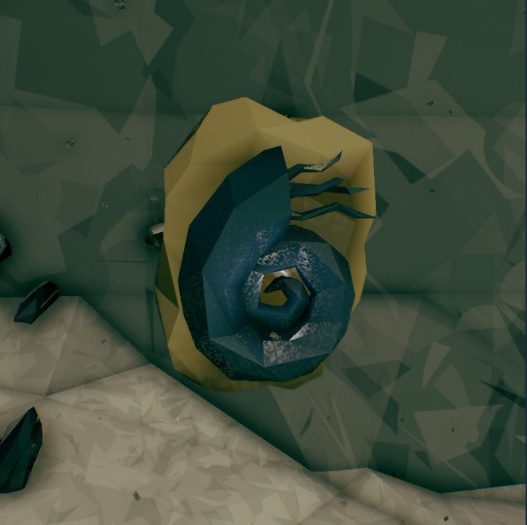 The Alien Fossil is a popular commodity among RnD’s xenobiology division. The existence of fossils on Hoxxes naturally implies a long and turbulent biological history on the planet, one that we are very interested in unraveling. Initial DNA sequencing points to the prior existence of multicellular eukaryotic organisms on Hoxxes. These Fossil samples in specific show vague similarities to DNA samples taken from creatures of the Mactera genus. Our researchers are in the process of testing the hypothesis of these Fossils serving as evidence of a genetic link between the Mactera and Glyphid genera on Hoxxes.

The Alien Fossils will be located dotting the walls of your cavern. Many fossils tend to be found in areas higher above the cave surface, necessitating the use of creative tactics for reaching these Fossils. Scouts may use their Grappling Hooks to zip towards out-of-reach Fossils and grab them as the Scout returns to the ground. Alternatively, Dwarves may use their pickaxes to tunnel up the sides of walls as a way of reaching these Fossils. Be mindful of your capacity to survive possible unplanned long drops either way.

The hauntingly beautiful Apoca Bloom is a rare bioluminescent plant species that can be found in sparse population density across Hoxxes. Its scientific name is Apocaridan luminex. The Apoca Bloom is known for its deceptive resilience to environmental stressors and comparatively long root system, allowing it to acquire nutrients and water in a wide radius around the base of its stem. What’s most notable about the Apoca Bloom, though, is its symbiotic relationship with a ubiquitous bacterium found around Hoxxes.

Apoca Blooms are similar to Alien Fossils in the way they are acquired–simply approach them, pull them out of their soil, and deposit them when possible. What’s convenient about Apoca Blooms is the distinctive glow they give off at all times, which makes them easier to locate in the dark. Apoca Blooms will also occasionally cluster together in small groups, which can make fulfilling your quota easier in the long run. 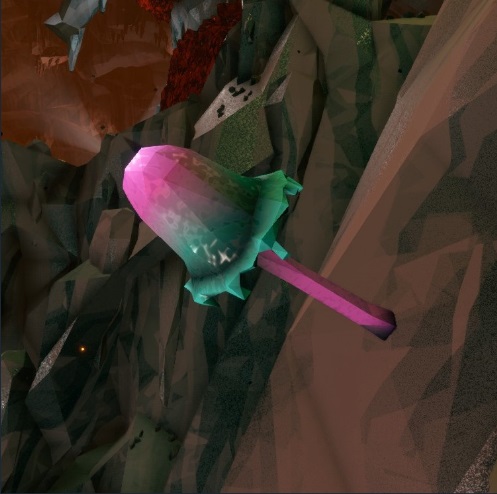 The Boolo Cap is another example of the peculiar plant life found on Hoxxes. The Boolo Cap’s scientific name is Belpherica amoxans and it is classified as a fungus. The humble Boolo Cap is what seems to be the most widespread species of fungus around Hoxxes, excluding the family of fungi found dominating the Fungus Bogs.

\Its high intracellular density gives it the ability to grow and thrive in all but the most hostile of environments on Hoxxes. Initial analyses suggest an average lifespan of around two weeks, occasionally dispersing spores for reproduction during its lifespan. RnD is currently exploring the reproductive habits of the Boolo Cap in order to better understand the overall plant biology of Hoxxes.

Boolo Caps are very simple in their acquisition: approach them and pull them out of the ground. As such, the Scout’s mobility can make them a valuable asset for acquiring and depositing Boolo Caps. Boolo Caps will sometimes grow on walls, making it slightly more difficult to acquire them in such a case.

This section goes over Secondary Objectives that are more complex than the simple grab-and-deposit items listed earlier. These Deep Rock Galactic objectives will require specialized tactics to complete.

Dystrum is a peculiar ore that is geochemically associated with Aquarqs, though deposits have recently been found dotting the landscapes near Liquid Morkite wells as well. Dystrum is a dark bluish ore that is commonly used in specialized weapon ammo.

Many Dwarves have also requested small amounts of Dystrum to use in decorating their rooms and gear with. Dystrum has the thickness and texture of gold, which makes it similarly straight-forward to mine out. Be sure to check for deposits in hard-to-reach areas as well.

The Ebonut is a peculiar example of serendipitous bioadaptivity in action. The scientific name of the Ebonut is Ludophorum ebonium. Ebonuts are composed of a thick Ebonite base with a fibrous membrane shell surrounding a hollow space with a core inside. RnD theorizes that the membrane shell is useful for protecting the core within from encroaching wildlife.

Once it reaches peak maturity, the Ebonut will open up its shell and display a number of small nut-like seed clusters around the core, which young Glyphid Swarmers enjoy eating. RnD believes that the Ebonut uses this function to reproduce; Glyphids eat the protrusions off the core and later redistribute those seeds throughout the area by defecation, allowing new Ebonuts to grow and continue their life cycles.

Moreover, certain species of Ebonuts are now associated with rare mutations of Ebonite Glyphids, which have much stronger chitin shells to protect themselves with. RnD is very interested in exploring the link between the Ebonut and the various effects it has on the wildlife around Hoxxes.

Ebonuts can be found dotting the landscape within a mission area, and most of them can be found on surfaces with low inclination. To collect an Ebonut, you must first use your pickaxe to break the shell so that you can collect the core from it. If you are attempting to harvest an Ebonut growing on a wall or other sheer inclination, dig into the side of the terrain to make sure you don’t fall down while trying to harvest the Ebonut.

This Deep Rock Galactic Secondary Objective is less of a research endeavor and more of a grievance with Hoxxes. Fester Fleas are unremarkable from a biological standpoint, except for their keen ability to damage stationary equipment in the field. They possess a very lightweight and flexible body structure, which allows them to fly quickly and squeeze into tight spaces.

In one instance, a single Fester Flea managed to burrow into a Pumpjack and was subsequently crushed by the mechanisms in the pump system, causing its gut fluids to burst out and cover the machinery. The gut fluids of Fester Fleas can quickly solidify when in direct contact with oxygen, which poses a natural threat to gear and joint systems within machinery.

The Pumpjack was subsequently damaged and required immediate repairs to fix. A general-purpose insecticidal system for repelling Fester Fleas is in the works, but these Fester Fleas must be culled in the meantime. RnD is offering a bounty for teams of Dwarves who manage to kill at least ten Fester Fleas in the field.

Fester Fleas are known for being very fast and agile creatures. Upon being harmed, a Fester Flea can easily fly to a safe distance and avoid further harm. Scouts can use a focused shot from the M1000 Bolt-Action rifle to easily kill Fester Fleas from afar with a single hit.

Alternatively, applying a damage-over-time effect to the Fester Flea, such as Fire or Poison, is an easy and reliable way to kill Fester Fleas, even if they manage to fly away once hit.

The Gunk Seed is an impressive example of the complex microbiology found on Hoxxes. Gunk Seeds manifest as enormous clumps of various species of microbes living within a loosely-knit nutrient-filled ‘ball’ of collected biological remains. The Gunk Seed itself is contained within an unattractive sack-like shell suspended from the ceiling. These Gunk Seeds will often be dominated by single-species of bacteria, creating a pleasing poetic allegory for the perennial class conflicts experienced within human societies. Gunk Seeds serve as hubs of sorts for the reproduction of various microbes on Hoxxes, where they can later break off from to do their thing. RnD’s xenobiology division is very interested in collecting these Gunk Seeds to help catalog the various types of ubiquitous microbes found around Hoxxes.

Gunk Seeds can frequently be found dangling from the ceilings of large caverns. To harvest them, shoot them with one of your weapons to pierce the fibrous Gunk Seed shell. The Gunk Seed will then fall to the ground, where it can be picked up and deposited. Be aware that Gunk Seeds can be rather heavy, so keep those muscles ready for a bit of exertion when depositing.

Hollomite is a dark-purple-colored ore that seems to form over stalagmites in caves. Its geochemical properties are similar to Croppa, both exhibiting a tendency to grow crystalline formations on their exteriors and having a similar microscopic structure. RnD is collecting Hollomite for testing and cataloging purposes, as well as to experiment with the possibility of using this uncommon ore to improve the detection capability of the IR lenses on Minehead turrets and APD units.

Hollomite can be found protruding out of the ground in various flat areas around the map. For this, mine out all of the Hollomite and deposit it into the nearest ore receptacle. RnD requests for Dwarves to procure at least 25 standard units of Hollomite permission to receive the associated Credit bonus.

That’s it for this Deep Rock Galactic Guide 2022