Not all Divine Knockout Gods are strong; some perform best when coupled with specific characters or require synergy, whereas others are effective throughout all game types and don’t require synergy to realize their full potential. 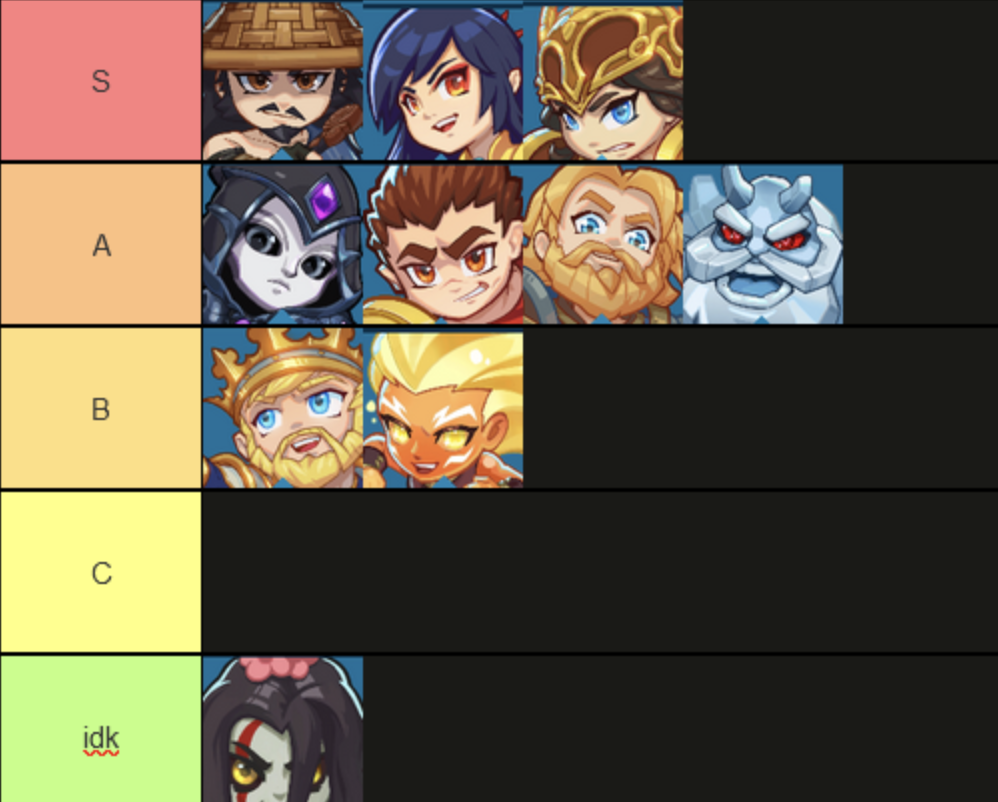 Susano – The initial hit of his 3rd ability has extremely long range and is a pretty easy way to get into advantage, and using his aerial light into aerial heavy combo following a nado or the 3rd hit of his 3rd ability made ringouts pretty easy. Also his ultimate can be used defensively to dodge certain other ultimates, recover, or to edge guard opponents after they use their dodge.

Amaterasu – charged heavy has deceptively good range, tracking, and long active hitbox with it being multihit. Her fast recovery can be used to crit people into the air (thought hard to hit) for a guaranteed spike or light combo. Her ult is very fast and basically makes it so you can’t approach her just by existing. All in all, very fast character with also really good range.

Athena – Very long range, un-reactable spear throw that can be used to kill off ledge, a parry that can be used reactively against any ability that has a crumb of telegraph, and an ultimate that is pretty much impossible to miss when the enemy has their recovery skill on CD.

Thanatos – Easy hit confirm with his circle into light combo, good recovery that can be used to stall. Ultimate is good, but not as good as Amaterasu because it’s easier to react and dodge, despite the range advantage it has.

Hercules – Jumping into people with his recovery slam is a great way to get in on people with how fast it is, and this with his charge can be a very good way to contest the health pack spawn in the middle. Boulder is okay, not as good as Athena spear, and his ultimate is easier to dodge than others. Though has good burst damage and boulder snipes off the ledge are still nice.

Thor – Kinda feels like better King Arthur in 1s to me, atleast. Stun is hard to hit but leads to either ~40% damage or a kill, hammer throws off ledge following a heavy attack or spin 2 win can lead to great early cheese kills. Spin 2 win can be dodged out of sometimes and also interrupted regularly, but still an oppressive move, especially with the move speed increase talent to avoid being interrupted and for chase (IMO).

Ymir – Wall has minimal uses in 1s, but can be used to hide Ymirs slam animation to get some cheesy kills. Ymir actually has a surprisingly good aerial game, and combined with the slam ability makes him scary to fight against. His ult is kinda dog though.

King Arthur – Seems more like a 2s or 3s character to me. Ult is super close range and hard to hit, his stun is very hard to hit if the opponent is looking out for it, and his slow has long range but is relatively slow moving itself, and can be jumped over. The movespeed from his recovery ability is VERY good though, no matter what gamemode.

Sol – Also doesn’t seem like a 1s character, her explosive burst will be interrupted or dodged most of the time (probably just interrupted), her fireball can be used to area deny the health potentially, but still wont see much damage overall, and her ult is easy enough to react to in 1s.

Izanami – idk no one plays her