You can find it at the end of this DQ Dai A Hero’s Bonds article.

Dai: Washed ashore on Dermline Island as a baby, Dai was raised by the lump shaman Brass. More recently his latent talents have flourished under the tutelage of Avan, the hero who once saved the world from Hadler.

Popp: An admirer of the hero Avan, Popp became his apprentice to train as a mage. He gets carried away easily and has a tendency to run away when things get tough, but he also has a compassionate side.

Avan: This former hero serves as a mentor to Dai and his friends. In the past, he defeated the Dark Lord and saved the world. Despite his mischievous side, he has an unshakeable will and is a kind teacher.

Hyunckel: The commander of the Dark Army’s Undead Legion, a corps of warriors who have transcended death itself. He fights with the Dark Armour Blade, which can repel offensive spells cast its way. Although he was Avan’s first disciple, he deeply resents his former master.

Maam: She defends her hometown of Nayle with the magic bullet gun given to her by the hero Avan. Maam is a strong-willed girl who means business, but she’s full of kindness on the inside.

Hadlar: Once known as the Dark Lord, his army of monsters was strong enough to threaten the entire world. Sometime after being defeated by Avan, he was revived by Learn, the Dark King.

Corcodine: The commander of the Dark Army’s Furfang Legion, a contingent of vicious monsters. Bold and proud, he has no fear of death on the battlefield. 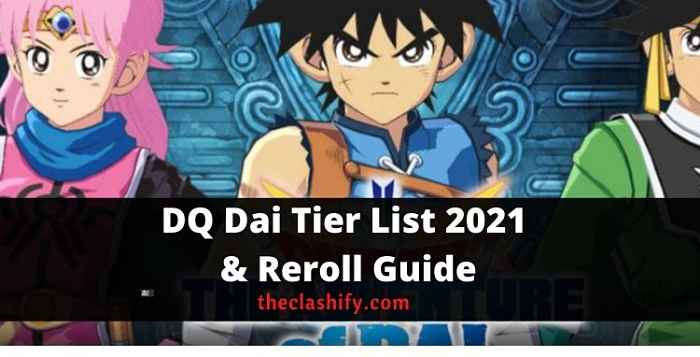 How to Reroll in DQ Dai A Hero’s Bonds

If the game gives us the banner above, you’ll want to aim for these two weapons: Knife of Papnica (Sun) 4 Star and Avan’s Sword  4 Star Both weapons come with a unique cinematic skill. And a boosted 0.5% pull rate.

The knife is made for Dai, and the sword is made for Avan. Duplicate copies will increase the equipment’s level cap IIRC, allowing it to grow stronger. 5 copies to max evolve a gear.

What about other DQ Dai 4 Star weapons (no rate up)?

Theres Vortex Axe, an axe made for Crocodine. Lightning Lance, often used by MC especially if you follow the Hero Vocation Board. Magical Booster, usable by Popp? The staff of Glad Tidings, usable by Popp again I think. He’s a mage. BTW MC can equip any weapon. However, you’ll want to synergize your Vocation Board (skill tree) with a specific weapon as you can’t max these boards easily.

What is Vocation Board?

Basically, a skill tree, lets you take skill that benefits certain weapons for your MC. The “Hero” vocation board benefits Lance iirc.

There is plenty of armor in Gacha and it’s probably more useful to get multiple copies of DQ Dai 2 Star Armor or DQ Dai  3 Star armor to evolve them than a single 4☆ armor.

You unlock them for free from stories or events.