Hi guys, Today we will show you Dune Spice Wars Characters, Dune Spice Wars Factions, and Dune Spice Wars Beginner Guides, Dune Spice Wars is a 4X real-time strategy game developed by the same team that brought you Northgard. You must command your tribe and strive for power and supremacy over the harsh desert world of Arrakis, set in Frank Herbert’s famous Dune universe.

There are 4 factions in Dune Spice Wars and you can choose your own factions, such as House Atreides, which values honor and political power, or House Harkonnen, which values violence and deception. With the local Fremen, master desert survival and guerilla tactics, and gain influence as the Smugglers through illicit trades and infiltration. Select your councilors to tailor each faction’s existing strengths and weaknesses. Duncan Idaho, the famed swordmaster of the Atreides, will aid your growth and battle skills. With the help of Chani Kynes of the Fremen, gain control over people and information, or overwhelm with military force with Rabban of the Harkonnens.

The Fremen are Arrakis’ indigenous people. They lead a vigorous and unyielding resistance to the imperial invaders, who have enraged them. Their martial expertise is well recognised by the few who have been fortunate enough to survive a confrontation with them.

The Fremen have been a persistent thorn in the baron’s side for the past 60 years of Harkonnen occupation. Their long-term goal is to transform the planet into a lush, temperate environment, which could jeopardise the spice trade. The Spice Wars present an opportunity to free the planet from imperial control, which the Fremen would gladly accept. 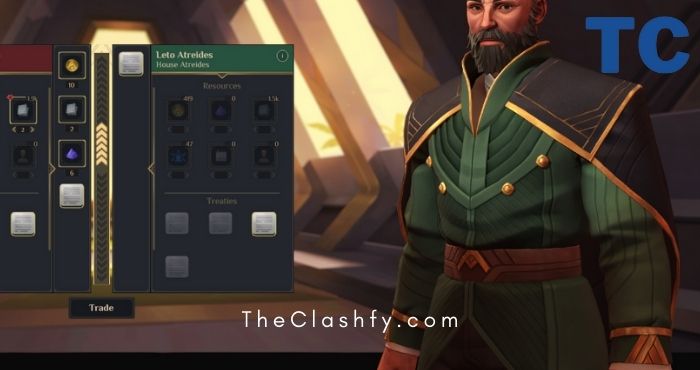 House Harkonnen hails from Giedi Prime (a heavily industrialised planet ruled by their harsh Baron), and they have a reputation for ambition, violence, and malevolence, so it’s no surprise they’re one of the Imperium’s most dreaded great families.

They are a force to be reckoned with, and dreaded by their fellow houses, for their clever and nasty political tactics, as well as the centuries-old historical animosity they have maintained with House Atreides.

It’s no surprise that Baron Harkonnen sees them as a threat to his ambitions for power and control. They’re one of the most powerful Houses in the known universe, honorable, efficient, and well-respected. House Atreides is one of the Imperium’s Great Houses and a key member of Landsraad, the Imperium’s parliament that brings together the major and smaller houses. For millennia, the Atreides have controlled Caladan, a lush, marine planet, and have led their kingdom with fairness and respect.

The spice trade, like any other high-yield business, draws a diverse range of entrepreneurs. Smugglers are a key underground economic power in the Imperium, since those who desire to elude the reach of CHOAM turn to them for the coveted commodity.

And wherever there is profit, smugglers will be waiting to play their cards right… With an armed force and political clout, the smugglers run their own area. Their operatives have a stake in every planet’s dealings, affecting public policies and trade worldwide.

After all, the Smugglers’ ultimate goal is to one day reach a point where their family would be able to stand on their own as a Landsraad home.