This is a Dynasty Origins Conquest Wiki by The Clashify

There are many different types of Heroes in Dynasty Origins Conquest, and we’ll include some of the better ones below, including Archer, Guardian Support, Light, Cavalry, and Heavy Cavalry.

1.) Meng Huo is A brave warrior who commands 100,000 Nanman warriors. It takes seven captures and releases to subdue him.

2.) Huang Gai is a fierce warrior who served three generations of the Wu kings. Known for his fire attacks and trickery.

Brothers in Arms: When an allied hero’s HP is below 20% and Huang Gai’s HP is above 50%, Huang Gai transfers HP to that hero.

3.) Dong Zhuo Born in Liangzhou, Dong Zhuo was known as a hero in his youth. Once he gained power, however, his ambition got the better of him.

Brutal Ambition: Dong Zhuo sacrifices a soldier to recover HP when his HP is below 60%.

First of all, you have to complete the tutorial in Dynasty Origins Conquest. You will be able to utilize your free pulls after completing the instruction. If you are dissatisfied with the characters you receive, simply exit the game. Select Dynasty Origins Conquest from the options menu and click the “clear data” button. You’ll be able to restart the game from the beginning if you relaunch it. 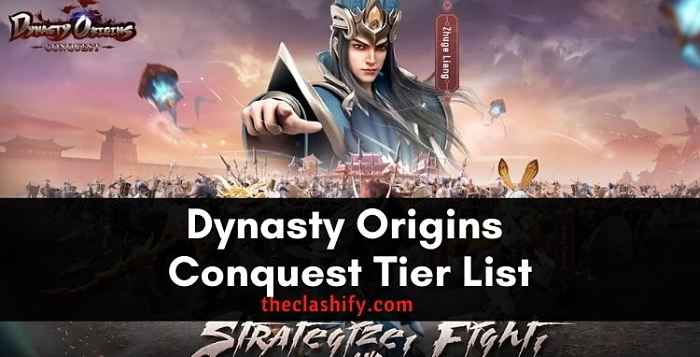 How to Level Up fast in Dynasty Origins Conquest

Completing the Story stages after completing the tutorial will reward you with EXP, Feats, and resources needed to create advanced hero gear. You’ll swiftly level up and gain access to new game modes.

Level up swiftly in the early game to unlock additional game modes and earn more rewards.

Hero BR is mostly enhanced through hero leveling, leadership leveling, hero advancement, hero staring, skill leveling, Elixirs, and buffs. Once you’ve unlocked Battle of Chibi, elixirs become available at level 42. If you manage to unlock Battle of Chibi by day 2, you should take use of any available Mystic Herbs as quickly as possible. The amount of characters from the same country you’ve drawn, as well as their grade, determines Hero Buffs. The more heroes there are from the same country and the higher their grade, the more bonuses you unlock.

Concentrate on improving your skill level in the early stages of the game. To improve your mage’s skill level, complete stages to obtain Tomes of Magic. Mages have many functions, skill effects, and formations that are compatible. Choose a mage that matches your formation and concentrate on skills to help you advance through the early phases of the game and into the Arena. For the early game, Zhou Yu and Diao Chan are the best options.

There are a few things to keep an eye out for if you want to spend money.