The playing style of Echoes of Mana is similar to that of a normal mobile MMO. Gamers take on the role of protagonist Quilto/Quilta, who awakens in a dead universe and should repair it using memories from the Mana series’ realms.

Our protagonist is sent forth by the Mana Goddess with the spirit Baashear as his guide and companion, and the two will team up to gather more allies to help them on their adventure.

Gamers will be valued based overall performance in order to receive in-game incentives such as coin and raw resources.

Battles in the main story are conducted in real-time as groups of missions. Each mission must be done with the utmost efficiency. On a particular field, both opponents and allies can move and attack in any direction, and when the appropriate conditions are satisfied, they can use a variety of special actions.

The protagonists of Echoes of Mana are Quilto (male) and Quilta (female), and players can pick between the two when they begin the game. Since they both utilise the same weapon, there aren’t any other notable changes.

A diligent knight in training, Duffle uses her unique battle style to attack enemies with a sense of eagerness.

Honeycomb is a support healer with two heal talents to aid the squad and an offensive special that deals damage in a circle around the player. 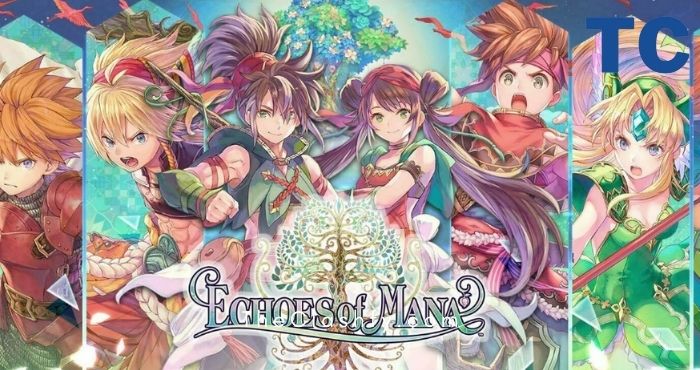 A young boy/Girl charged with gathering the Mana Tree’s fruits. Quilto is guided by the Mana Goddess as he goes through the echoes of worlds that once were after waking up in the sanctuary with no memory of his history. His unruly hair, haphazardly pulled up with weaved linen, makes him easy to detect.

Pinzton’s cheery young girl practises with her halberd every day in the goal of becoming a real-life fairy-tale knight. Duffle’s personality shines through in her battle style, as she is unafraid to enter the fray and ready to form alliances with anybody she meets.

Honeycomb is an ardent young lad in Pinzton who is dedicated to the study of magic, descended from a long line of sorcerers.

He wishes he could put his magic to the test and shares Duffle’s enthusiasm for the legend of the legendary mana swordsman, but he’s too proud to acknowledge it.

This fluffy lifeform, chosen by the Mana Goddess, is ready and eager to accompany his person on his voyage. Despite his tendency to be hasty and arrogant, it appears that he isn’t exactly the know-it-all he claims to be.

A young, mild-mannered wolffolk member on a mission to find his pack. His compassionate nature leads him astray, as he frequently deviates from his path to assist others. Blainchet is easy to read, despite his best efforts, because a flick of his ears and tail gives him away.