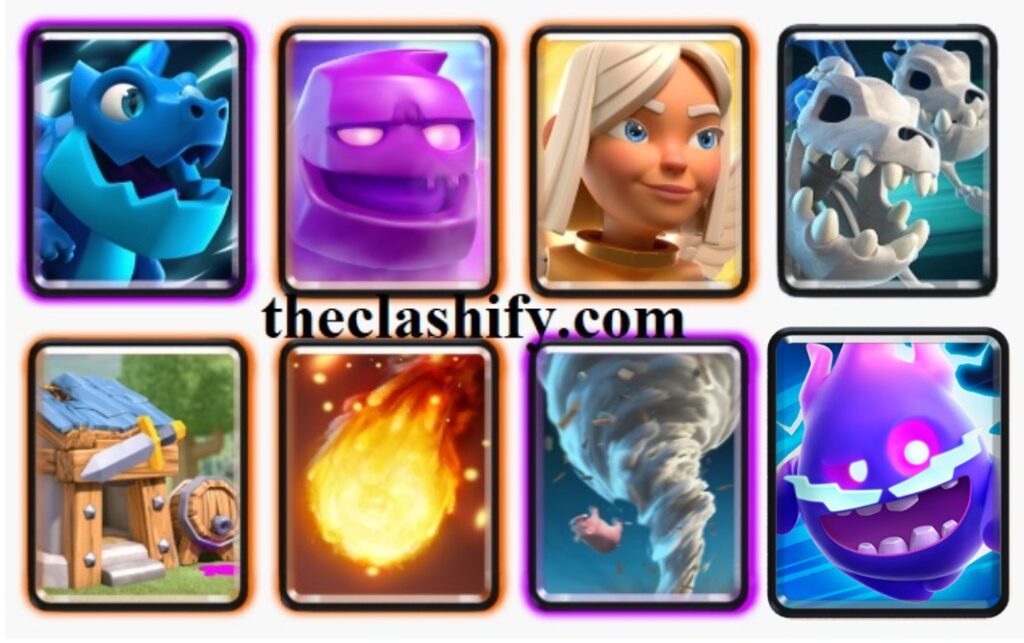 Elixir Golem: Best Tank in the game for 3 Elixir don’t be too aggressive with your elixir golem, try to play him in front of your counter push units or behind your king tower if you have a Barbarian hut down. It’s the elixir golem blobs that do most of the damage especially if they’re in the heal radius of the battle healer

Electro Spirit: Electro spirit is not only a cycle card but it is very good in defence,

Tornado: Tornado has great synergy in this deck because it can be used to pull units into range of Skeleton Dragons or Electro Dragons range so the dragons can splash all their units. It should also be used to activate your king tower as early as possible. Use this card late game to pull ranged units into the opposite lane and away from your push. This works well Skeleton Dragons in this deck.

Battle Healer: She is very good in big beatdown decks, because of the huge value that she can provide with her healing aura.

Skeleton Dragons: Best splash unit to carry in a Elixir Golem deck as it deals a more amount of damage then the baby dragon, If possible, try to use it with the Elixir Golem in a push. Use it against swarms like Goblin Gang or Minion Horde. It can counter Musketeer very well. The Skeleton Dragons is used to take out ground/air swarm cards for positive Elixir trades/counter push potential.

Electro dragon: Electro dragon is a good defensive unit that provides you with a good counter push card. It can help slow down heavy units and it’s chain lighting ability means it can also counter support cards or swarm units like minions.

Fireball: A very versatile spell, great at burning down the tower when you can get value fireballs. It’s also great versus swarms like barbarians and minion horde, squishy troops like a musketeer, witch, etc.

In the early game, I recommend trying to activate your king tower with the help of Tornado as early as possible, this is particularly important against hog rider, bait, and graveyard decks and You need to wait for the opponent to make the first play, always defend throughout single elixir and figure out what deck your opponent is playing.

you can play Elixir Golem at the back of your king tower and combined Elixir Golem with Battle Healer and Skeleton Dragon or Electro Dragon.

This Battle Healer Elixir Golem Electro Spirit Deck Arena 12+ is ok against All bait decks, if your opponent zaps/Logs/arrows certain cards, you have other cards in your deck that you can get good value out of. if they use fireball on your Skeleton Dragons now you can make a huge push with Giant+Night Witch+ Electro Dragon,