1.) Elixir Golem: Elixir Golem is the Low cost strongest tank in Clash Royale. Being the tackiest troop in the game can withstand heavy blows and can tank for your supporting troops. Also when it explodes it splits into two small golem. He can be used to kite units into the opposite lane if required too. He shouldn’t be used defensively unless it’s your last resort and you need to use three elixir to cycle to a better defensive unit.

2.) Battle healer: Battle Healer is  the best card in the game. She is a four-cost Rare that heals herself when she’s not attacking and heals everyone when she’s attacking. She is very good in big beatdown decks, because of the huge value that she can provide with her healing aura.

4.) Baby Dragon: Op card and It has been extremely strong for months, his splash damage allows him to protect his brothers from swarm units like minions and bats. He can act as a sacrifice for the inferno dragon too allowing him to reach their tower

5.) Electro Dragon: Electro dragon is the best card in the game if you know how to use it, his chain damage can stun units buying your other two dragons extra time to destroy the opponent. This guy can really help out against inferno dragons and also helps take out support troops behind the opponent’s tank. Electro dragon is a good defensive unit that provides you with a good counter push card. It can help slow down heavy units and its chain lighting ability means it can also counter support cards or swarm units like minions.

6.) Tornado: It is a great addition to this deck, use this card to pull their defensive units away from your Elixir Golem, Tornado has great synergy in this deck because it can be used to pull units into range of Baby Dragon or Electro Dragons range so the dragons can splash all their units. It should also be used to activate your king tower as early as possible.

7.) Earthquake Spell: Earthquake card costs 3 Elixir is much more useful than rage, it does 400% more damage to buildings,it is an easy way to destroy buildings like Cannon and Furnace for a positive elixir trade. Always use Earthquake with Elixir Golem+ Nighr Witch

8.) Magic Archer: The magic archer will support your Elixir Golem and Mother Witch pushes after a successful defensive sequence. Placement is the key, Magic Archer can earn you many elixir trade-offs, and Placing him correctly can give you an insane amount of value especially if you can chip away at their tower while damaging their units. 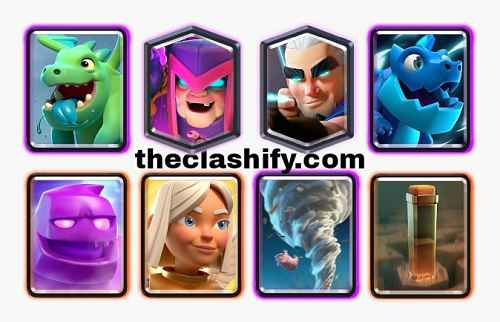 Early game you can start out the match with Elixir Golem at the back. You can also play Magic Archer in the back. Normally I say to learn what your opponent is playing but you can see just how powerful this deck because there isn’t a single combo in the meta that can stop this deck

In single elixir, you might want to play fairly passively and just take what the opponent gives you if you get the opportunity to go aggressive then take it

In double elixir, you can begin to use your Earthquake Spell offensively to support your troops or just take any spell value. If you’re struggling to break through their defense you can pressure the opposite lane or you can try to go super aggressive after a successful defence

Thanks for Reading this  Elixir Golem Mother Witch Deck 2022 Arena 11+ Gudie, Have Fun