Expeditions: Rome is the third game in the Expeditions series. The player will take leadership of a young Legatus, a military official with a rank equivalent to that of a modern-day general who commands a legion in this episode. He will gain in reputation and power, and near the end of the game, he may become a Ceaser.

Expeditions Rome Combat appears to be similar to that of Expeditions: Viking, with many of the same talents present. Hexagonal grids and turn-based fights with a squad of 1-6 player-controlled characters of a specific class, including the player character, are featured in the game.

The fighting interface is also extremely similar to that of Expeditions: Viking. The game includes five detailed characters that stay with the player character throughout the game, as well as Praetorians, which are bare-boned characters similar to those seen in Conquistador and mercenaries hired in Vikings.

Crafting is no longer a skill; instead, it now requires the gathering of numerous resources, either from exploration or by deconstructing armor and weapons, as well as a schematic, in order to create an item.

Diplomacy is replaced with Ethos, Logos, and Pathos, which are three styles of rhetoric as described by Aristotles’ book Rhetorica. One is picked during character creation, and the other is mastered later in the game.

How to find the Spear of Achilles in Expeditions Rome

You will arrive in Asia Minor proper after conquering Lesbos. You’ll reach a fishing village named Troas if you walk northeast (this is also where you’ll be for the main mission while looking for a traitor). 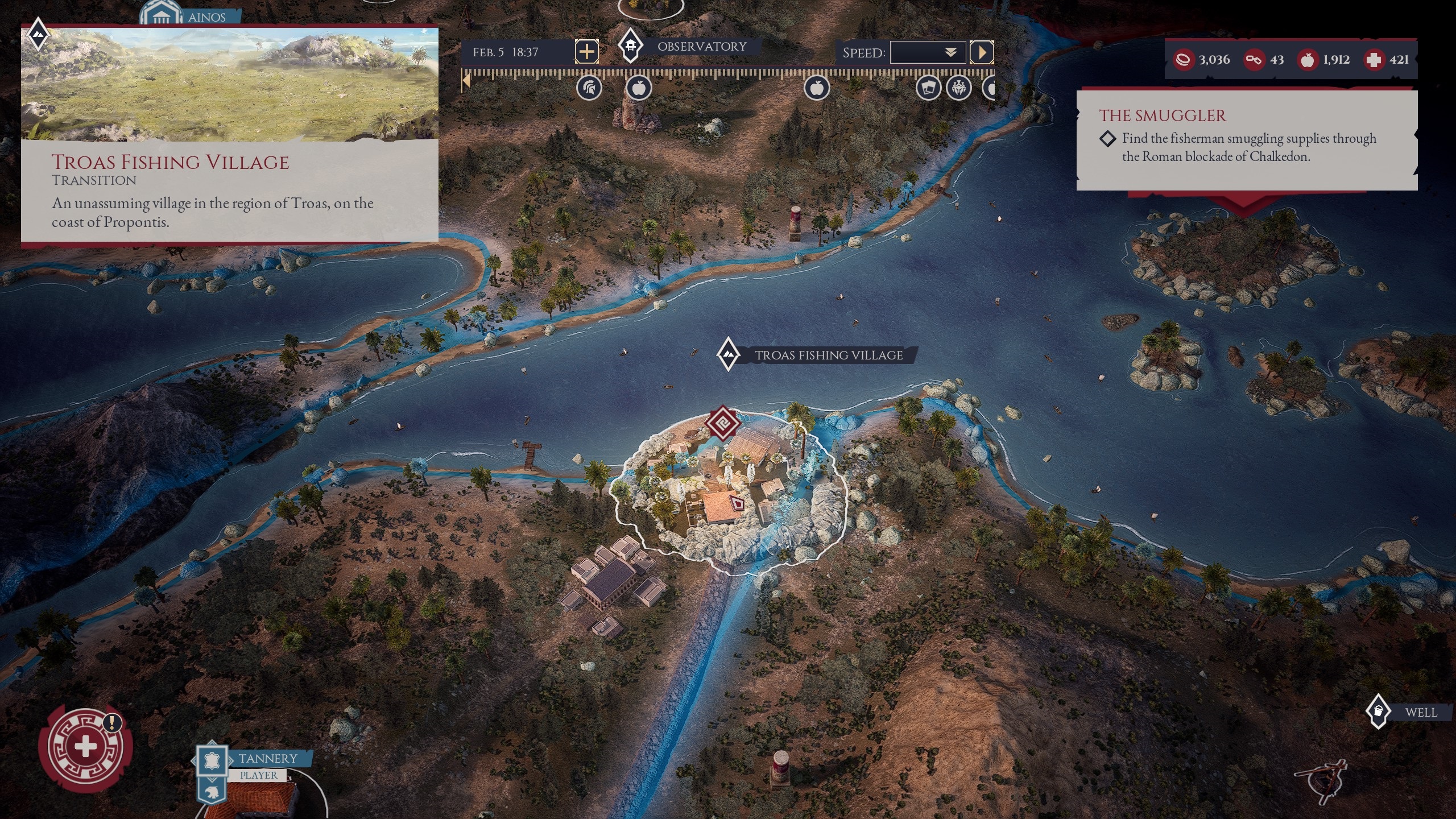 A Greek villa with a garden is located on the opposite side of the village from where you arrived.

Your first clue can be found within a tree in the garden (unless you have ALT toggled to see the outlines of items, this is probably the hardest part of this whole endeavour).

When you’ve finished picking up the object, hover your cursor over it in your inventory (also do this for the two other clue items in the following steps). 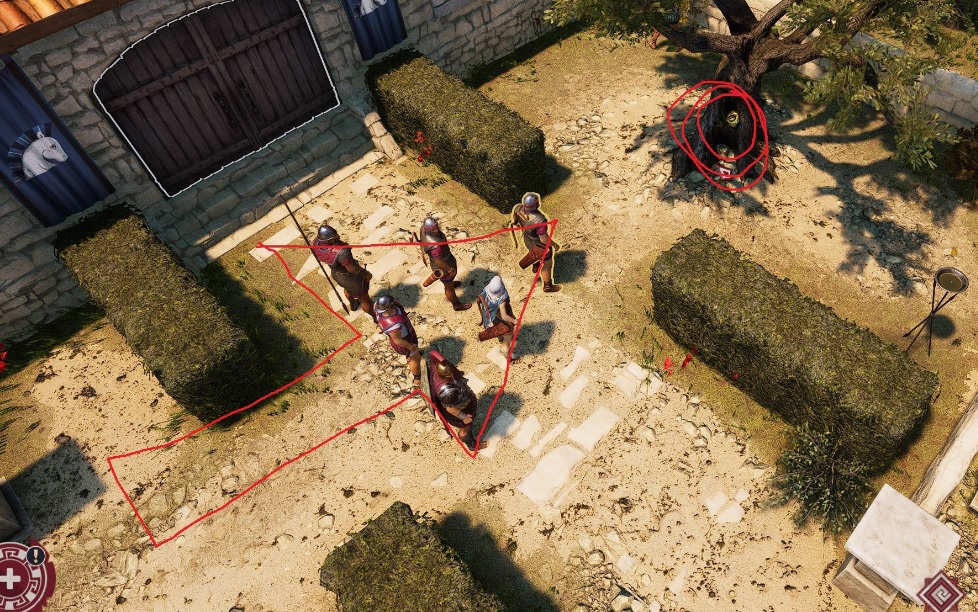 With the item in question in your hand, leave the village and make your way to the little peninsula to the east. 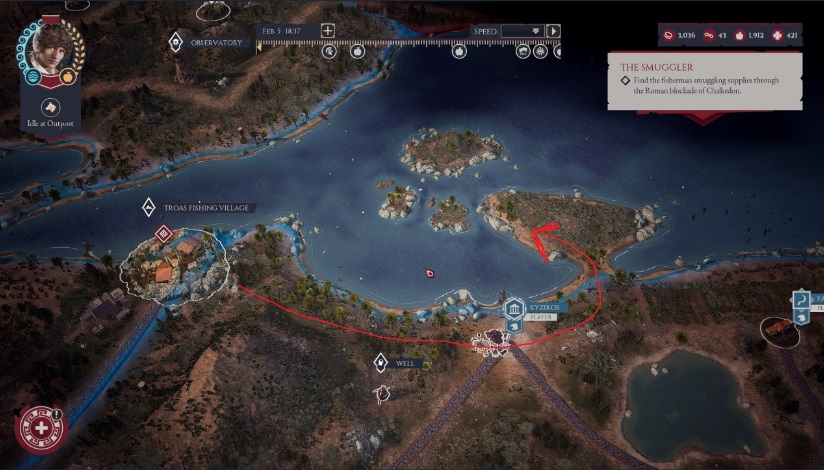 Your next destination is back on Lesbos, on the beach on the southern part of the island. 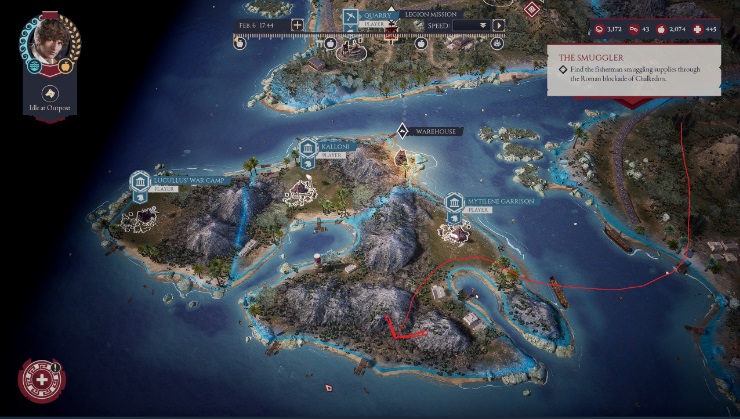 Your final destination is to the north on the westernmost tip of another peninsula. Go inside to collect your reward.

Expeditions Rome Money, resources, and so on should be no problem because the game has no timeline and you can gather resources endlessly through legion missions. Conquering an area is also a breeze. In battle, I usually use whoever provides me the greatest loot as my army leader.

For camp upgrade, I focus on the armory — forge — foundry path. As this gives you level 1 – 2 – 3 weapon/armors, and allow you to forge tactic items. IMO getting the forge early in Act 2 is especially important for early-game survival; and foundry is more optional (because your Praetorian would probably be good enough by the time you get foundry)

For other upgrade, speculator tent is certainly a must (to replenish the tactical items); the factory / arsenal gives you better stratagem, which can help give you better loot & finish game faster; all others are quite optional.

Finally, in Act 1, immediately recruit at least 3 archers + 2 veles at level 1 or 2. Refresh the pool (from camp) if needed, and make sure they haven’t invested in useless perks yet (see perk build below).

In battle, enemies are stronger than you in HP and damage, and will always use tactic items (fire jar/pilum/poison). Luckily early game in act 1 they are on par with your Praetorian, while late game they can be 50% stronger.

Always equip any tactic item you have (everyone should have pilum, then equip some bandage/fire jar), and grab any free items on the battlefield if movement allows. Forge more tactic items until all your Praetorians have pilums.

Weapon upgrade is more optional, but do craft all the unique items, and upgrade any weapon/armor if you have resources.

The battle should be fast and quick. The more turns you have, the more damage you suffer. So in the early game, this is achieved by 1. free pilum use; 2. kill the militia enemy first (an enemy with a chess icon), so you get one extra action; 3. the bleeding / harried/burning weapon effects that lower enemy damage, health, movement, etc.

Then in the late game, it will be easier — archers machine gun everyone, and Veles will solve any remaining individual enemy.

Other than story companions, additional Praetorians can be recruited from the camp starting from Act 1. I suggest recruiting them as early as possible, preferably at level 1 or 2, because higher-level Praetorian may have perks we don’t need. At max level, one can pick 19 perks, but more like 18–19 perks depending on the starting level.

The perk choice below is certainly not unique, but so far the most effective in insane mode.

Expeditions Rome Class Sagittarius: Early game archer is a little underwhelming since it has similar damage as others but worse in survivability. However late game they are absolutely OP and will handle most enemies in 1 turn. This is also my main char.

In the early game (before getting barrage), equip your archer with one bow & one melee, and pick a versatile perk to boost your damage (it works well with the action point refund kill, as archers have high movement).

In the late game, every archer shall equip two bows with normal damage skills (aimed shots/fire shots / crippled shots, etc.), and do not equip weapon skills that penalize your accuracy/range/damage (say half-draw). Also, equip them with any Talisman that can boost min/max damage.

Once battle starts, click barrage — then you simply walk around and deplete all your skills: 1 pilum, 6 shot from weapon skill, 2 quick shot, 1 assist shot, and 1 more arrow-stab if you are lucky to get a melee. That is a total of 9-11 attacks in turn 1, about 100-160 damage, enough to kill 3-6 enemies per archer.

Expeditions Rome Class Veles: This is a good character from early to late game. Especially good for killing enemy leaders.

In the early game, Veles is a good damage dealer, especially a sneak attack in the first two turns. From mid-game, once you have marathon + born-ready + rush, they become true assassins: click marathon, move to the enemy leader, sneak attack + shiv, then use the rush to refund your action, and strike again; or you may use duel, rush, then sneak attack + shiv. It will easily deal 50–80 damage on enemy leaders.

Strictly speaking, Marathon Veles is worse than Machine Gun Archer in damage output, but archers are limited to movement and target sight and cover, while Veles can use the marathon to reach anywhere in 1 turn. That is why we need at least 1 Veles.

Expeditions Rome Class Princeps & Triarius: They are useful in the early game. Princeps is tanky and the shield can absorb damage very effectively; Triarius can hit from range and can heal, and there is a strong 5-hit unique weapon in act 2. But in the late game under the insane mode, their damage output is simply worse than Archer and Veles.

I just level them up in defender/vanguard and medic/destroyer route. It does not matter much since they serve the supporting role.

In the early game, your team shall be relatively balanced to cover all your defense and heal needs. In the middle game (act 2 onwards) your Veles with the marathon and sneak attack is the best damage dealer, so bring more of them.

Then in the late game, once you have a barrage on archer, all you need is 4-5 archers to solve most enemies in turn 1, and 1-2 Veles to finish enemy leaders in 1-2 turns.

In a story-based battle, you are limited to your companions. With the main char being archer, you still have 1 Veles + 2 Archer (main char + Julia), which is sufficient in my insane run so far.

Sometimes, however, the enemy will move first in turn 1. This may cause you to lose some archers before they can start hitting. Just load your save and re-position your other troops to take the damage. So long your archers get rolling, the battle is straightforward.