The Goddess of Victory Nikke simulation room is separated into sectors A to C depending on the difficulty level, which ranges from 1 to 5.​

Obviously, the needed combat strength will rise as the difficulty and the sector do within a single difficulty level.

Standard skill and burst skill level 1 material are present in stages 1 and 2, and the coding manual, which must be obtained separately from level 2 skill level-up materials, will start to randomly drop in steps 3 onward.​

From level 4 of the usual skill and the burst skill, the skill level up to material level 2 and the code manual are needed.

It’s crucial to manage buffs in the simulation Room.​

Every time you move through a sector in the simulation room, you may acquire one of the buffs in the form of, and. The player can select which buff to receive from the available possibilities.

You can pick up a buff with different benefits once you’ve selected a buff shape.

For instance, if you choose to get a buff, three alternatives from those buffs display as seen above.

The buff’s intricate effect is extremely varied and boosts attack power, defense, stamina recovery after being hit, ammunition capacity, and so forth. 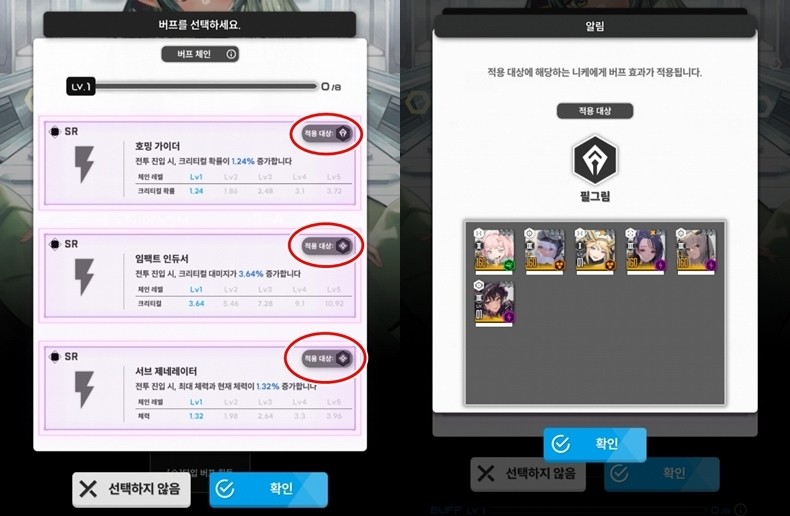 However, there is a caveat, most of the buffs are applied by obscuring the target.

Can you see the target picture in the first screenshot above?

That glyph is a Pilgrim glyph, and if you select the buff, only Nikes belonging to the Pilgrim will receive the buff effect.

Therefore, before choosing a buff, you need to click the Apply Target tab to check who is being applied, and whether the applied target includes characters to fight in the simulation room, and get the most necessary buff.

Buffs are divided into categories based on buff effects as well as types of buffs.

As you progress, you will be able to choose from ‘survival’, ‘manipulated’, and ‘attacking’ buffs.

You have to look at the options and choose the shape you need or the one that will get the effect applied well, right? 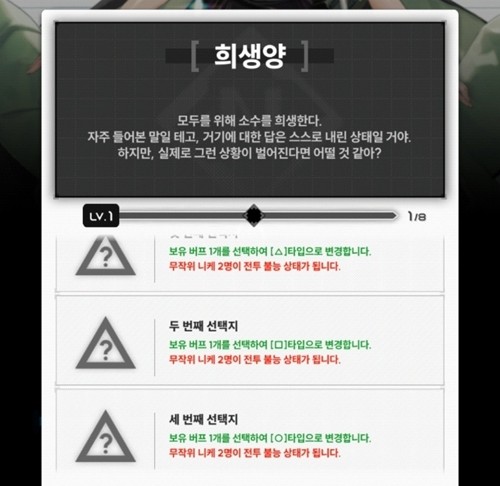 In addition, there are also command test, recovery, and reinforcement series options.​

The command test shows options with 100% pure random effect, and in most cases comes with a risk and a return.

On the return side, there are buff grade enhancement, buff shape change, buff random addition, etc.

The accompanying risk has effects such as avoiding Nikes, incapacitating some Nikes, and forcibly changing or removing some buffs.

If you say you can’t choose because it’s too risky, you can go ahead without choosing, but there are rare cases where you have to choose one unconditionally without even having the option of ‘don’t

choose’.Restoration series and Enhancement series appear once in the area immediately preceding the end of each sector.

You can’t have both, you have to choose one of them.

The recovery series has the effect of recovering a certain amount of the HP of all Nikes or reviving Nikes that have become incapable of combat.

If the main character is out during the battle, you can revive it with this.​

The reinforcement series has effects such as upgrading the buffs you have to SSR grade or unifying all your buffs into one.

Unification of the double buff form is really important. 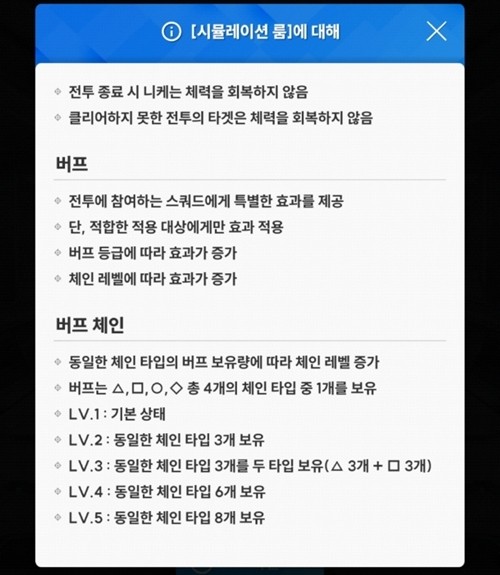 The form of the buff has been consistently mentioned from above, which is a very important element directly related to the buff chain system.

As mentioned above, buffs have the shape of □, △, ○, ◇, and depending on the number of buff types you have, the buff chain system is applied to increase the effects of each buff.​

As shown in the screenshot above, to increase the buff effect due to the buff chain

Level 2: Have 3 buffs of the same type

Level 4: Have 6 buffs of the same type

Level 5: Have 8 buffs of the same type

You just need to have a buff like this.​

If you mix 2 shapes of □, △, ○, and ◇ with rubbish, the effect looks good right now, and the buff chain is left in the default level 1 state with no activation at all.​

Even if the rarity is low or the effect is simple, if you pick it up in the same form as other useful buffs, the buff chain will activate and the effects of all the buffs you have will increase.

However, there is no guarantee that only the type of buffs you need will be optional every time you progress in each sector, so you can usually choose the buff by collecting 3 levels of the buff chain, that is, 2 types of the same type of buff, 3 each.

Then, just before the boss room, if the reinforcement series option pops up, there is a fairly high probability that you can unify the buff form, and with this, you can achieve level 5 of the buff chain in one shot.

​Sector A has a short section, so if you collect a lot of buffs, there are 3-4, so here, collect the same type of buffs as much as possible.

​From Sector B, you can stack around the buffs you collected from Sector A, but you can also collect 3 other types of buffs for the 3rd chain level.

​If you go right before the B-sector boss room, the number of buffs is stacked up to 8, and when an enhancement series appears here, it is ideal to select it and aim for unification of the buff form.

​Of course, in order to do this, you can’t choose the Nike recovery effect, so you need to develop a squad that doesn’t lose power while you’re here, right?

​If the main power loss or stamina damage is severe, there are many strategic considerations, such as giving up level 5 of the buff chain and allowing it to recover.

After clearing the sector boss, you can choose one of three types of epic buffs.

​There are also 4 types of Epic buffs, but the effects are very powerful compared to other buffs and apply to everyone regardless of the target, so it is possible to match other buffs depending on the type of Epic buff.

​If you receive irreparable damage while progressing through a section, and you cannot proceed further, you can give up the progress of the sector and start the battle from the beginning of the sector with all power on.

​Instead, in this case, all the buffs accumulated so far are blown away, so there is a trade-off.

‘Buff Legacy’ is triggered when you give up progress and start over from the beginning, or when you complete one difficulty and move on to the next difficulty.

​Of all the buffs that have been collected so far, except for the Epic level buff, it keeps one of the others and lets you take it with you to the next difficulty or restart the battle.

​Of course, all the buff chains you have built up will be blown away, so it would be better to leave the buffs to be left in the buff legacy as the strongest ones out there, right?

​The simulation room requires a high level of training because you can only receive rewards by clearing all sectors, and you can’t get any sector rewards if you are blocked in the boss room.

​Of course, in the beginning, even a difficulty level 1 or 2 is difficult and there is no choice but to gasp, so it is better not to be in a hurry and take time to develop slowly and slowly break each difficulty level and each sector.