In Graffiti Smash, You can take part in PvP battles in real-time online battles. To clear dungeons and defeat bosses, work together with your pals. Enjoy a 1 million-word script that explores stories of people’s ties and dynamics in a post-apocalyptic world.

Lamel is an SSS tier hero and very good support card, You can Obtain Lamel from Hunter Gacha. Hunter Skill is Fisherman: Delays skills of enemies that he hits by 2 turns. Lamel Link combo is Surf Rider: Increases the SPD of the hit ally.

Conrad is an SS tier hero and very good support card, His attack type is Bounce and You can option his from Hunter Gacha. His Hunter Skill is Outmanoeuvre: Fires a pen that bounces off walls up to 2 times, enhancing allies touched before moving them.

Inari is an SS tier hero and a very good All-around card, Her skill is Seal Formation: Covers enemy paint and delays skills of enemies that she hits by 1 turn. 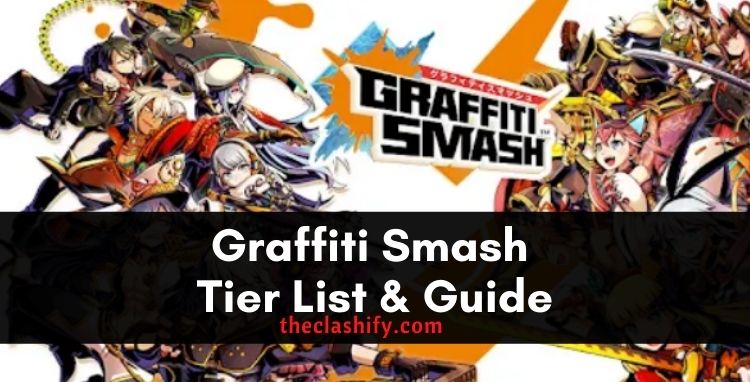 If you want a head start early on, reroll! As you will quickly realize, this game has a lot of power creep and many dungeons are almost impossible to beat without specific units. More on those in the hunter section below. You do not need to reroll. It is only advised if a special banner/event is up, as it takes quite some time to reroll (15min).

Hunters are your game’s units, heroes, armies, and champions. You may upgrade them in a variety of ways, as well as grind for their adoration for emotes that can be used in co-op! To play dungeons, you can form teams of up to four hunters. Press the fourth menu at the bottom, then the fourth choice in the new tab to access your hunter inventory.

Hunters have three base stats: HP, Damage and Speed and are divided by their ‘type’ and element. Piercing type hunters go through an enemy while bouncing type hunters bounce off of enemies. There are 5 different elements:

Advantageous elements will deal more damage to the opposite element and receive less damage.

Hunter have active abilities: Link Skills are activated when comboing into an allied hunter, hence it commonly referred to as ‘Link Combo (LC)’. LCs have different effects; some deal damage, some impact the board or your hunters.

A Hunter Skill (HS) is the main active ability. It is activated after a set amount of turns by clicking on the portrait of your hunter. Hunters also have special seed slots. One limited to normal hunters and two for bloomed hunters. These seeds provide special effects and are acquired through events or blooming system.

Every hunter is equipped with at least one gimmick resistance (some may have up to three). Here they are:

A white boarder or teeth around a resistance indicates that when this hunter interacts with it, it will buff the hunter. Currently, your damage will be increased. Hunters also have special passive abilities which interact with the board and your own units. Some get bonus damage against monster types or elements and some have other effects. There are a lot of different ones and each hunter has its own.

There are two ways of acquiring hunters in Graffiti Smash.

You pull them from Gacha or farm them in Dungeons/Events.

Farmable hunters are separated further into two types ‘Normal Hunters’ and ‘Annihilation Hunters’ referred to as AH. Normal Hunters can always be farmed by going into the Dungeons menu and then choosing the third tab.

Annihilation Hunters however are locked behind time-limited dungeons which open throughout the the day for one hour each. These will show up on your home screen–> Currently, there are 7 different AH hunters: Lulu, Noah, Sulfur, Arcana, Neo, Ortho, Melto.

There are 15 different weapon types for each element. Their appearance may change but in general, same weapon types will have similar effects, more commonly referred to as Weapon Arts (WA). *HOWEVER, most newers weapons having their supplemental WA replacing main WA thus this is may not be always true

So, guys, That’s it for now. We will update this page with more information.