In Early game, you can start out the match with the Heal Spirit or you can try to activate your king tower with Tornado as early as possible to help you out on defence throughout the rest of the match. Against beat down again play the same lane with the Electro Continue Reading »

In Early gameplay fairly passively and make positive elixir trades on defense until you’re aware of what units they have that can counter your royal hogs. You can split Continue Reading »

In the early game, I recommend trying to activate your king tower with the help of Tornado as early as possible, this is particularly important against hog rider, bait and graveyard decks and You need to wait for the opponent to make the first play.

Always remenber defend throughout single elixir and figure out what deck your opponent is playing.

Once you hit double Elixir drop the big bad Elixir Golem in the back and build up your pushes. when the Elixir Golem crosses the river Continue Reading Full Guide »

This deck takes a lot of practice because one wrong move and you are completely screwed over, so play it slow save you Mini Pekka and Musketeers for Defence and use these both card very carefully Continue Reading Full Guide »

Mini pekka can be used to help take down tanks and also bridge spam units like the ram rider, battle ram, hog or ghost. She can also be used to catch miners. Try to counter push behind this unit if it has a over half it’s HP remaining. Never use this card at the bridge it should only be used as a defensive troop. , you can pressure opposite lane with Mini P Ice Golem if you know they don’t have an answer to it. This card is an epic counter to the Cannon Cart and Royal Hogs Continue Reading Full Guide »

This is a Fast cycle 2.5 Elixir Hunter Wall Breaker Miner Poison Deck, Hunter and Bats will help you to counter opponent Air troops and Ice Golem for kitting their tanks. The best starting moves would be Miner in the anti-tornado position, Bats in the back, or Ice Golem in the back Continue Reading Full Guide » 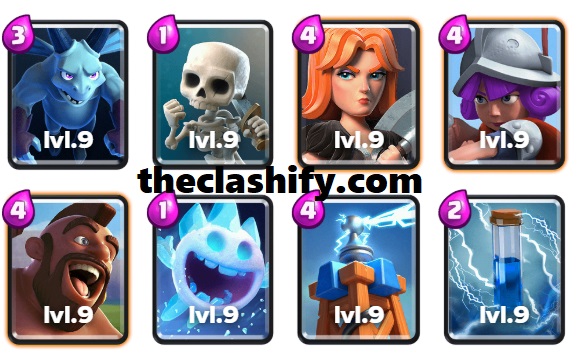