In this article, we will tell you Lineage 2M Classes Guide and Lineage 2M Best Character to use in the game along with Lineage 2M Tier List so come and take a look at this guide.

You can choose one race from Human, Elf, Dark Elf, Orc, or Dwarf. For each race, you can choose one weapon: one-handed sword, double sword, dagger, bow, staff, or and Some races do not allow you to choose specific weapons.

In fact, your early job is not an important part of Lineage 2M. This is because Lineage 2M has a new class change system. Lineage 2M’s occupation is determined by race and weapons during character customization.

For exampleIf you select a human character one-handed sword weapon, the basic occupation is determined as a knight. After that, you can get one advanced job through the previous level at the beginning of the game. After that, you can get classes in addition to levels 40, 65, and 80. Also User canbe used Gacha（Gambling) you are free to change your Class from Human Night to Elf Silver Ranger. (Class and Character

However, However, even if you change the class, the ability to add directly after level 20 is not adjusted. Ex：It is advantageous to use with characters who share their own weapons. 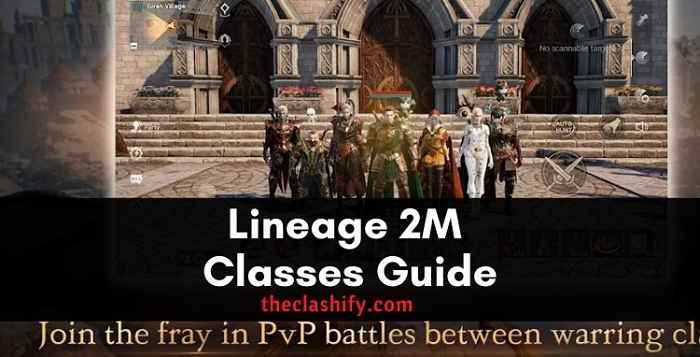 Sword – A tank weapon with high defense and multiple survival skills, Flexible use of shields and survival skills,  Generally is very powerful and useful in high difficulty areas and dungeons

Dual Sword – High defense and maximum HP with a position of melee damage dealer, Use skills flexibly to cause “Shock” & “Stun” and other debuffs to the enemies, Dual swords can maximize the strength power in closed combat

Dagger – Closed-range combat damage dealer with high evasion, High Attack speed & move speed, can perform a combo attack to enemies in a short time, Use skill to avoid ranged attack and safely close to the enemy.