When it comes to choosing a LOTR Rise To War faction, there are several factors to consider. The first is the location of your faction on the map. The second one is The Faction Buffs come next. Each faction has its own buff that helps them in various aspects of the game.  Next, we have Starting Commanders every faction has a unique starting commander there are various commanders for good and evil factions, but they have their equivalents on the opposing side. These are the three perspectives while choosing the best faction in LOTR: Rise To War. Also, Read Here: LOTR Rise To War Commanders Tier List 2022

In Lord Of The Rings: Rise To War, there are only a total of 6 Factions. Four of these six factions are good Factions, while the remaining two are evil Factions. Soc some and take a look at LOTR Rise To War Best Faction. 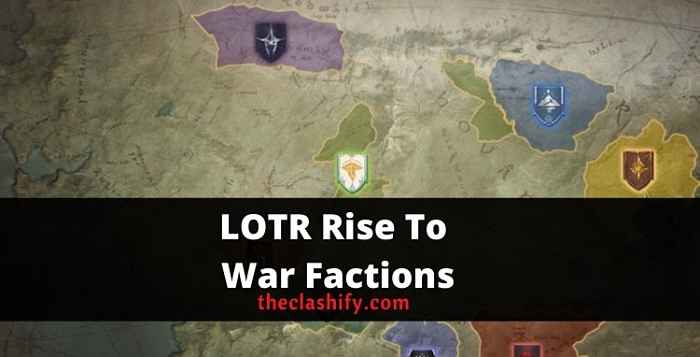 1.) Rohan – Rohan’s faction bonus is plus three percent marching speed, which makes Rohan players extremely mobile and allows them to travel about the map more quickly.

Their starting commander is Eowin, he’s a fantastic commander who buffs both mounted and melee units.

Rohan’s position in the center of the map, along with their faction buff of +3 marching speed, makes claiming additional territories on the map easy.

Rohan’s troops and commanders move quickly, which helps them in battle and in claiming additional territory. Rohan has good troops that deal a lot of damage and is in a good position on the map to grab the ring.

2.) Gondor – The Gondor faction bonus is a 5% reduction in construction time, This allowing you to build forts and upgrade your city more quickly than other factions.

Swanites are the tier 4 units in Gondor. They are cavalry units with high defense and are excellent tanks. Oathbreakers are a type of neutral camp that can be found in Gondor. These units are immune to physical damage and are one of the strongest neutral camp units in my opinion.

Since Gondor is located in the lower-left part of the map, Gondor forces have a strong defense and can take a lot of damage, according to my observations while playing Gondor. Gondor is also stocked with every form of resource, so resources should not be an issue.

3) Lothlorien – Lothlorien’s faction bonus is a 5% increase in commander experience gain. Haldir is their Starting commander and he’s a good fighter with the ability to heal his allies.

March wardens, a range unit that provides significant damage, are their tier four-unit. Mutual camps available to the elves are eagles, which are flying troops, brings, and hobbits.

They’re in a central spawn, so they have plenty of space to grow. To the west of Lothlorien, there is an area for expansion. They have the ability to raise the level of their commanders. Because of their faction boost, they are able to move faster. which equates to a 5% increase in command gaining experience and the Lothlorien is in an excellent position to accept the ring.

4) Erebor – The Erebor have a faction bonus of -5 conscription time, which means they can train troops faster than others. Dwalin is their starting commander, and he’s a good commander who deals heavy damage regardless of his troops’ skills.

The iron warriors, a tier 4 unit, are tough and difficult to defeat. Erebor has a safe spawn because it is in the upper right corner of the map, Erebor has tanky troops that can take a lot of damage, and airborne has a major advantage in fighting first against dragons because their main hero can negate a lot of fire damage, so they are the faction that will not run out of gold, and it can also help them get building boosts, healing boosts, and other benefits.

5) Mordor – Mordor is an evil Faction in LOTR: Rise To War. Morder’s faction bonus is a 5% increase in resource output. Their starting commander is Gorbach, who buffs orcs and can give madness or stun to the enemy. Their tier four-unit is the ravager, which has great health and damage but is slow.

6) Isengard – The faction bonus reduces recruiting costs by 10%, allowing you to focus on training troops rather than worrying about resources.

Located at the southern end of the Misty Mountains, Isengard is known for its indestructible black tower, Orthanc. A wizard tempted by the power of the One Ring has established a foothold here.