So come and take a look at this Skeleton Barrel Mega Knight Firecracker popular deck that’s been having success from pro players and myself alike. 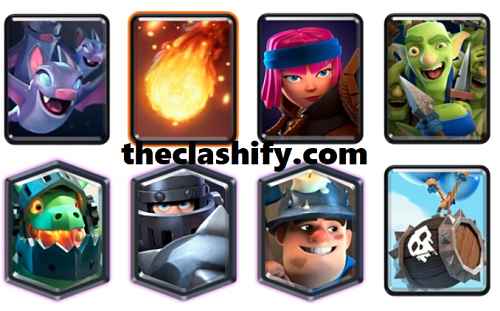 1.) Mega knight: Mega knight I’ll mainly be used as a defensive response. This allows you to take advantage of his ability in the arena, his knockback effect is a good answer to bridge spam and bait archetypes. Go for the counter push behind if you get the opportunity, his high health makes him a great tank for the barrel. Support your Mega Knight with Firecracker and Inferno Dragon.

The most important feature is his spawn damage, dealing the same damage as his jump attack, roughly around Fireball damage. This allows him to be a monster in defending, placing him down in the middle of an enemy push to wipe them out.

2.) Miner: Miner also holds another strong unique ability, the ability to be spawned anywhere on the map. He is great for chipping enemy towers, destroying Elixir Pumps, and also taking out defensive troops while the tower is locked onto your Mega Knight. In addition, he can be used as a mini-tank for Skeleton Barrel and Inferno Dragon, making him a priceless addition to this deck.

3.) Inferno Dragon: Inferno dragon will be your main tank killer, it’s a great counter to golems, giant and lava hound. It can also be used against balloon decks too. If the opponent uses zap or electro wizard to counter this card then you can punish them with your skeleton barrel.

4.) Skeleton Barrel: As soon as I got the Barrel I couldn’t help but try to figure out how to use it properly. It has a bait aspect, it distracts well, it deals a lot of damage when left alone, and it only costs 3 Elixir. I couldn’t fit it in Zap bait decks, so I tried another option like Mega Knight decks and it worked great

5.) Goblin Gang: This card is steadily rising in popularity. They are so versatile than Minions. Actually, the role of Goblin Gang (GG, as I will call them throughout the guide) is pretty similar to that of Minions. The difference between the two is that GG has more DPS than Minions while Minions can fly as compared to GG which is ground.

6.) Bats: A strong, cheap defensive card that deals with a multitude of threats. Use them as distractions to powerful troops like Musketeer or Inferno Dragon, or use them to take out mini-tanks as they march down the lane. They are also a quick response to Hog Rider or Miner and are potent on offensive counter pushing with Miner.

In addition, they can also be placed at the river to help serve as distracting units to enemy Inferno Towers when Mega Knight is active.

7.) Fireball: Usually your game-ender, you wanna get the opponents to tower down to spell cycle range. But in some games, you can’t. Since Fireball deals significant damage, you can always Fireball a 4 or more elixir troop so that it dies once it reaches your side of the arena (if unsupported). Fireball is what takes out Minion Hordes, 3 Musketeers etc.

8.) Firecracker: Firecracker is very good to counter support troops, and it can Mega Knight, Pekka with the help of Goblin Gang. Always use Firecracker in defence and the go for counter Push with Mega Knight and Skeleton Barrel.

The general method of playing this Skeleton Barrel Mega Knight Firecracker Deck Arena 10+ is first defending, then counter push. Skeleton barrel is the best opening card you can play when using this deck. It can show you what small spells they have or it can force them to waste elixir cycling to find a good counter too.

You can also cycle Goblin Gang at the bridge or play miner into the safe spot on the opponents’ tower. Focus on defending enemy threats then supporting your own troops to counter push with Mega Knight+Firecracker+Skeleton Barrel

This is a Skeleton Barrel Mega Knight Firecracker Deck Arena 10+ where you need to be playing aggressively even in a single elixir, so keep applying that pressure and In double elixir rolls around, focus on building larger and larger counter pushes with as many troops and spells as you can. Split lane push if you haven’t broken through their defence in a single elixir. Keep cycling those skeleton barrels at every opportunity.

Thanks for Reading this Skeleton Barrel Mega Knight Firecracker Deck Arena 10+, Have fun