In this deck The mega knight will be used for crowd control and the Hunter, Inferno tower and Mini Pekka will use to take down tanks and hogs so come and take a look at this Clash Royale Miner Mega Knight Balloon Deck 2022 Arena 10+ 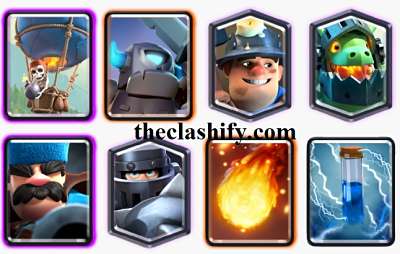 Mega Knight: Mega knight will be your primary tank in double elixir time and will be ideal for emergency crowd control. He is a great heavy unit and can be fairly difficult for your opponent to counter. He is a good counter to use against royal hogs and other grouped units or units. He can offer a lot of value while also tanking damage for your other supporting units. He shouldn’t be used as your first card unless your opponent applies pressure and you need to use him on defense. He’s also great at rushing your opponent too if you have a good cycle and You can also use Mega Knight as a Tank for Miner and Balloon.

Balloon: Balloon is your main win condition inside this deck and is best used on a counter alongside your Miner or the mega knight. It can also be used with the Mini Pekka if your other units are out of the cycle. if the opponent doesn’t have a building you can play it directly with Miner, However if they do have a defensive building then the best placement is “behind the chain” which is next to the bridge. Remember this card has death damage, learn how much this is depending on your card levels.

Miner: This is your main win condition if your opponents Counter Mega Knight very well then he’s also the main support unit if they don’t.He does direct damages, and people usually will try to shut down the Mega Knight while not caring too much about the Miner. Keep the Miner for the counter pushes and the Elixir Collector.

Inferno Dragon: This is your Tank stopper, mainly to kill Giants, Golems, Pekkas, Mega Knights, Goblin Giants, Lava Hound etc. Inferno dragon will be your main defense against units like the golem, giant, and lava hound. If this card has full HP try to support it by playing your miner same lane to force them to commit more elixir to defend. This card is also key against beat down decks which are fairly common in the current meta.

Fireball: Fireball can be used on defence to help knock back a balloon, ram rider or even take out support cards with the help of the barb barrel. On offence (mainly in double elixir) you can start to use this card or support your hogs or help your troops win the battle of the bridge. It’s useful against buildings and centrally placed range units like musketeer or executioner.

Hunter: This card is your main defensive unit, he can be used against balloon, hog rider, ram rider, giant, golem, hound etc. Use him mainly against heavy tanks, he also has great synergy with the fisherman who can be used to pull units close to the hunter which increases his DPS. Use your skeletons to tank hits from a pekka, sparky or prince to help keep this guy alive as long as possible.

In the early game, you can use this deck as a miner chip while focusing on making positive elixir trades through your defence. Miner or cycling zap are great first plays,

This deck is very fun to play but you need to have a good awareness of what cards your opponent has in the cycle and what they will use to defend your push and your balloon, keep in mind that In this deck you don’t have much direct damage cards so you will often rely on the balloon death damage and miner chip damage unless you make a solid connection to their tower. Mini Pekka is also a good card to use to tank any damage for the balloon.

In defense If your opponent has golem beat down, you have your inferno dragon to help tank down the golem and you can apply opposite lane pressure with the mega knight opposite lane which is harder to defend than dark prince or bandit. Against bait decks you have the dark prince and mega knight which can completely block up a lane for a bait player.

This deck works very well on defense and will often allow you to counter push providing you save enough elixir to play the balloon.