Welcome to our MIR4 Classes Guide Tier List & mir4 beginner guide, which provides a comprehensive overview of all available characters in the game. MIR4 is an MMORPG game developed by Wemade Co., Ltd. In this article, we will show you MIR4 Best Classes and How to Create Characters in MIR4. Players can choose from 4 different classes in the game. Each hero has their own set of skills. 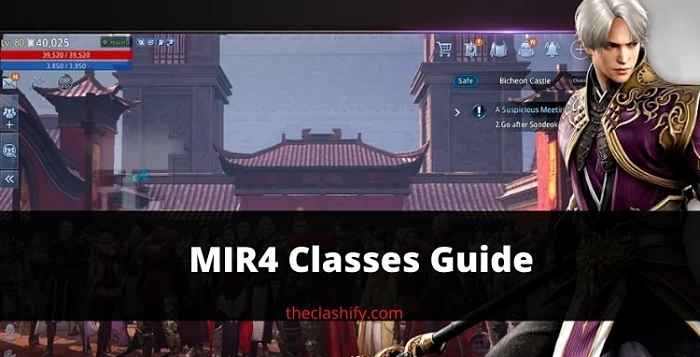 Players can choose from 4 different classes in the game. Each hero has their own set of skills. now let’s talk about each character.

1.) Sorcerer: A mage who uses the power of the elements to defeat his enemies. Although he was formidable when fighting alone, he became even more so when surrounded by teammates.

Ultimate: Dragon Tornado –One of the Spellcaster’s deadly moves that summons and shoot vortexes of wind, this is thought to be the embodiment of the whirlwind that appears when dragons fly.

2.) Warrior: A powerful warrior who kills the opponent with incredible agility while carrying a massive and heavy sword. These warriors have always been leaders in combat, armed with sturdy armor and unrelenting determination.

Ultimate: Dragon Flame – The Warrior’s lethal move created Chi Fire with extreme qigong, fused it into the sword, and unleashed it all in one strike, scorching the entire area.

3.) Taoist – A seeker of truth who helps others with his swordsmanship and spells. His recovery skills allow him to overcome the difficulties he faces.

Ultimate: Ray of Light – If you focus holy energy on your fingertips and then spread your arms, the energy forms a spear of light that pierces all enemies that come in your way.

4.) Slayer: A battlefield tyrant who uses his long spear to oppress the adversary. He destroys the opponent formation and removes the target at all costs, equipped with simultaneous attacking and protecting moves.

Ultimate: Dragon Spear – The Slayer’s deadly moves released a tremendous chi that shattered and pierced everything in its path with a force that almost defied nature’s laws.

How to Create a character

That’s all guys for this MIR4 Classes & mir4 beginner guide ( Best Character In MIR4 ). Stay tuned to TheClashify for more info related to the MIR4.