Welcome to our Mythic Heroes Beginner Guides, which provides a comprehensive overview of all Mythic Heroes Tips & Tricks for new players. This Guide is shared by Asura (Asura#4237) on the official reddit of Mythic Heroes.

All heroes adopt the fifth-highest hero’s level.(same as resocrystal if you are familiar with AFK Arena or other games, but here it appears from the start)

Do not ascend or enhance SR units. Using all SR copies you summon to enhance the main units in your team is where they shine (priority given to carries).

Don’t worry if you made mistakes with some heroes (i.e ascending SR heroes), the reset option at the top left of your hero page can tell you what to expect from it.

You cannot reset Divinity enhancements or Weapon upgrades yet, so tread carefully

At chapter 10-4, you obtain your Iconic Weapon for all SSR or above heroes. You can open it for 50k coins and will be given 5 stats to raise including a special one (the top one), and every 100 levels an ability is unlocked on the weapon. The first 225 levels have to be upgraded before you have the option to unlock it a second time, improving it further. To unlock the weapon a second time, your hero must be ascended to Mythic.

Do not focus too much on UR units unless you’re a whale (heavy spender), but at least 1 copy is good to have. Ideally for a normal player that wants to use them, raising an UR hero to at least Mythic (8 copies) is feasible and a good compromise.

Lucifer can be a great main carry in early game and if investment follows, later on aswell.

Raise a main carry 40 levels higher than the rest, then raise the team in order : Carry, Tank, Supp.

A balanced team comprising a main carry, an AOE (Area of Effect), 2 supports and 1 tank or the opposite is recommended. Some unorthodox teams even use 3 supports or none.

Limited banner only has SSR pity on the first x10 summon, and UR pity until you pull one.

The first x10 pull at the Astrolabe of Fate will give you a guaranteed UR OR SSR unit that you picked.

The best main carries to focus on at the moment are Lucifer, Susanoo (my favorite), GM (Ganjiang&Moye), Izanami, Oberon.

The other good carries are Artemis, Cleopatra, Persephone and Tamamo.

The best tanks are Hades and Athena and a few others can offtank.

The best supports are Idun, Naga, Nuwa. Dionysus is also useful for bosses with investment.

Market priority are dust, exp, SSR/UR shards (or other bargains). There’s a free refresh daily. Make sure to not spend too much of your gold as you’ll need it for upgrading. Except for the very beginning, it is not worth using gold to buy exp however if you have a ton of gold you can do it.

Buying the above with diamonds is alright for quick advancement, as you hit walls frequently.

I recommend buying the Gold and Dust chests in the Guild section for 2.5k coins each as much as you can, and the Yasakani artifact when it appears. Many great heroes among mages and supps can use it.

In the Pantheon section, Buying the Dust in priority, then Faith and Divinity stones are good as you will eventually run out of these resources and they will appear rarely in the future. I also expect that main source for these items will be the shop in the later stages.

Buy the cubes that are at 6 coins in the Tribute section (refreshes daily).

If you can rush to chapter 14, unlock the Mastermind Arena, and increase your rank as much as possible, you’ll be able to gather a lot of arena points daily the same way Astrolabe does by piling them up and be able to collect at least 300 points/hour (if you improve quickly). 300/h arena points for a month is 216k arena points, which allows you to pick up an UR unit and still have extra.

I recommend buying the UR unit in Arena section if you have good income for the points, and make sure to at least buy the cubes since the reset is on a monthly basis. The cubes play a very important part in the game and upgrading as much as possible is highly recommended as it scales exponentially. If you want to buy the scrolls you can, but they’re not that important. 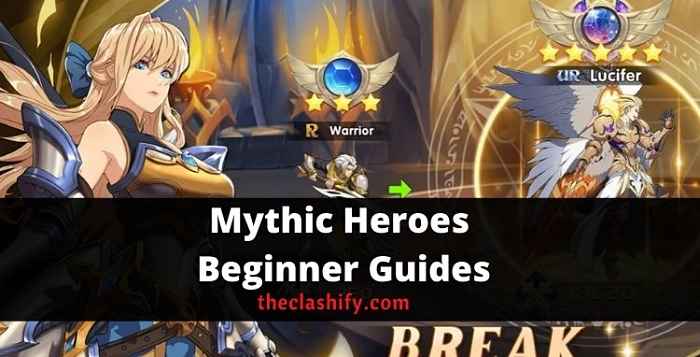 Pantheon lasts 2 days, and is better done on the second day as there’s a chance you’ll be stronger than on the first day.

Do not be discouraged by losing, it’s almost always a matter of RNG (the randomness) or tactics and you have to repeatedly try a lot, and in different ways. Like, a lot. Do not be surprised if it takes you hours to clear a stage.

Divine Chronicles, a.k.a “Faction towers”, are unlocked on campaign stage 12-4. To progress in them you will need to use heroes of a specific faction. Raising a few good heroes or at least carries for each faction is not a bad idea.

It is recommended to stay at the level 6 (7 at most) of the Zodiac Caverns once you unlock them as the low level weapon stones stop being a commodity and you would have a hard time raising your heroes’ low level weapons afterwards, impairing your progress with them. Once you have enough stones and upgrades for the major part of your heroes, you can proceed little by little with the mode to improve the higher tier of your heroes’ weapons and guarantee a smooth progress by stopping at level 10. Taking your time won’t be a mistake now, and it won’t in the future either.

Do not touch the Astrolabe of Fate (unlocks chapter 16) when it appears unless you’re a whale, not many things are worth it. You should still try your luck the first time it appears as there is a guaranteed UR OR SSR that you chose that will appear during the first x10 pull.

In the normal Astrolabe, using the gears after having unlocked all Astrolabe-related bonuses on your current Cube or face is good practice. you’ll be able to reap the most rewards for the time being. Of course, it is even better if you don’t need to use them (achievements get unlocked though).

The game and its devs are quite generous with rewards and events.

The Rookie Handbook event will remain even after the last day is over, until you have completed all the quests in it.

Guilds are cross-server, so you and your friends can meet no matter where you’re from.

Some very low-cost packs are worth getting, such as the first couple rookie packs.

Your very first top-up will give you the SSR unit, Zeus.

Your first purchase at $19.99 or more will also give you a pack including the UR unit, Lucifer.

Permanent subscription is also good and you can add the other monthlies on top. It also gives you a pack including the UR unit, Nuwa.

Completing campaign stages will make spontanous packs pop up. I recommend buying the $0.99 and $1.99 packs that appear then. Especially the ones from the early chapters, with very high value.

Pretty much any pack priced beyond $1.99 with a value less than 1000% isn’t exactly worth it in my opinion, but you can purchase them. Every bit counts after all.

There is a low-cost-huge-value campaign completion plan just like most gachas purchasable at $4.99 for the first part, and $9.99 for the following one.

The Carnival plan is available to purchase for 30 days, but the rewards will still be delivered after the 30 days are over.