Witch is a powerful close-range attacker, with good speed and attacks that deal damage in a range around her, but a low defense that can make her a liability. She provides numerous debuffs on enemies, which can allow a party to take advantage of the situation, but is generally a selfish attacker and the prototypical glass cannon.

Witch is an easy class to use in solo play due to her high attack and speed, allowing her to duck into and out of fights quickly. She can absorb some of her attack damage as HP, providing her with a moderate amount of sustain. Debuffing enemies will also make fights safer to take on by yourself.

Witch is a fairly selfish attacker; she doesn’t provide any party boosts, and her heal only helps herself. Her enemy debuffs can be useful to create opportunities for the rest of the party, but she will mostly be there to provide firepower.

A supernatural perfectionist with quick feet and a smart flying spear. With her varied skill effects, she can adapt to almost any situation. Witch uses a magical spear to deal damage on her opponents and cast debuffs on them. She is a short to the medium-range attacker.

Swordsman is a close ranged fighter and a good all-rounder class, boasting good attack and defense, fairly good speed, and a mixture of party buffs and enemy debuffs. He can be played offensively as he can hit hard and take a decent amount of damage, or played more supportively by focusing on party buffs and enemy debuffs. While he’s never as good at a specific role as the dedicated class (such as Destroyer for defense or Witch for debuffs), he can swap between roles easily, making him an easy class to play in all situations.

As a strong all-rounder class, Swordsman should be able to take down mob quests fairly easily due to his high attack and defense. Boss quests can be tackled more conservatively by paying attention to buffs and debuffs, and creating the right opportunity to close in for a strong attack.

Swordsman can swap between frontline offense and midline support depending on the flow of battle or the composition of your party, making him easy to slot in just about any party. It’s up to you whether you chose to focus on one set of abilities, or to fill in party gaps by adjusting your gameplay as a fight progresses.

With volleys of arrows and fast mobility, a ranged damage dealer confuses his opponents. He can also play a supportive role by strengthening his party. Rogue uses a bow to attack but also to grant buffs for party.

A fearsome warrior who attacks his foes with a massive hammer. He is cruel to his enemies yet a loyal friend to his allies. Destroyer uses a hammer to distract his enemy from your party members. 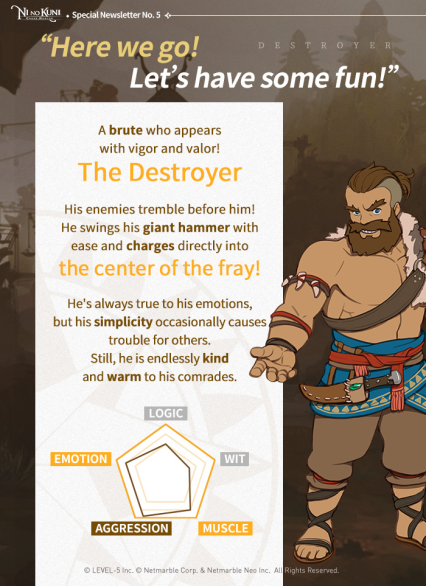 The Destroyer His enemies tremble before him, He swings his giant hammer with ease and charges directly into the center of the fray, He’s always true to his emotions, but his simplicity occasionally causes trouble for others. Still, he is endlessly kind and warm to his comrades.