Nightdive Studios’ long-awaited and much-requested remaster is now here! I wanted to write this guide to help novices have a better understanding of the game, answer some often asked questions, go over the weaponry, some of the monsters, and some PowerSlave Exhumed Guide and PowerSlave Exhumed basic gaming tips, and maybe do honour to one of my favourite games of all time.

PowerSlave was originally created by Lobotomy Studios and released in 1996 for the Sony PlayStation, Sega Saturn, and MS-DOS. The game takes place in and around Karnak, Egypt, in the aftermath of an attack by a race of alien monsters known as the Kilmaat. You’re the sole survivor of a special military unit dispatched to examine the danger.

Finally, PowerSlave Exhumed brings the traditional console experience to PC and newer console platforms, with improvements like modern resolution support, high framerates, configurable FOV, and level design that incorporates elements from both the Saturn and PlayStation editions. In addition, new elements such as mid-level checkpoints and varied difficulties have been included

Machete – It might not rust, but that doesn’t mean you should really rely on it too much. Ideal for causing a bit of property damage though. Use the machete to smash pots and vases… just hope nothing jumps out of them!

Pistol – Did you fire six shots or only five? No worries, guns in PowerSlave Exhumed never need reloading! This is your standard revolver. Serviceable at long distance for picking off some of the weaker enemies, but consider something bigger when trifling with larger foes.

M60 – The M60 is undeniably the workhorse weapon of PowerSlave Exhumed and will likely see more use than any other weapon in the game. This bad boy has a high rate of fire, it’s very effective up close, and performs moderately well at distances, too. Very satisfying to use, and will make you stick your lips out as you fire it. Keep this one stocked up on ammo at all times.

Amun Bomb – These are your grenades, and will prove to be a very useful tool. Not only do the Amun bombs deal good damage to enemies, but they can also be used to destroy weakened walls and cracked structures. The longer you hold the fire button in, the further you will throw it. Be sure to learn the art of ‘bomb-boosting’. This works very much like Quake’s ‘rocket jump’ where you time your jump as the bomb explodes, propelling you higher and further than normal at the cost of some damage.

Flamethrower – It does what it says on the tin. Particularly useful against mummies and wasps, the flamethrower will cause prolonged damage to an enemy so long as it’s on fire. It burns through fuel fast, so use it sparingly!

Cobra Staff – The Cobra Staff shoots powerful green snake…things that home in on nearby targets. Clearly designed for long-range use, the Cobra Staff is deadly at a distance, but the splash damage caused on impact makes it dangerous to use in close quarters combat. It can also be used as an alternative to the Amun bombs for boosting.

Ring of Ra – Unleash the fury of the Gods with a volley of ferocious fireballs. This ring drains in ‘ammunition’ very quickly, so keep it in your back pocket for a particularly rainy day. Fireballs cast from this will bounce around the vicinity, sniffing out any target it can.

Manacle of Power – Fire devastating bolts of lightning and eviscerate your enemies. Easily the most ‘expensive’ weapon to use in terms of ammunition, you should really save this for one of the bosses, unless you’re feeling particularly cruel of course. Hold the fire button in to charge it up for massive damage.
The Denizens of the Karnak Valley
Terrainian – Not your everyday garden spider! These ugly three-eyed freaks will try and nibble your ankles, but don’t let their size fool you. If you’re not careful, these little critters can do quite a bit of damage when in groups.

Scorpions – Much like the spiders, the scorpions like to ruin your day and waste your ammo by jumping all over the place… just like they do in real life! They’re a slippery customer, so try and pick them off from a distance.

Piranha – Before you start paddling and splashing around in water, be sure to pull out your machete first. The piranha like to munch your face, so dispatch them as quick as possible. Their bark is worse than their bite… except they don’t bark.

Anubis Zombie – Look, let’s just call it what it is: it’s the Imp from DOOM with an Egyptian skin. No point sugar coating it. That doesn’t make them any less deserving to get shot full of holes. Keep your distance and dodge those firebal-.. uhh, I mean blue energy balls. You know the drill.

Hawk – Often heard before seen, these birds of prey like to make their presence known before swooping in for the kill. Not too much of a threat, but certainly a nuisance. A single shot from the pistol will cause them to explode into feathers.

Omenwasp – My personal pick for the most annoying and irritating enemy in the game, and definitely NOT because of the nightmares they gave me as a nipper! These buzzing bastards like to fly around, ruin your day, and deliver a good sting. They’re not too strong, but they’ll make you wish you had a can of Raid or twenty.

Mummies – Because it wouldn’t be a game set in Egypt without ’em. These fellers have a rather rude tendency to fire evil red spirits in your location. If you try to get close and personal with them, they’ll go all caveman on you and start clobbering you with their staff. I recommend (re)killing these guys ASAP.

Bastet – They may look like statues, but don’t turn your back or else they’ll swiftly run up and claw you apart. Bastets are frequently seen in groups, so take them out quickly, because these babies can also disappear and teleport behind you. Nothing personal, kid.

Magmantis – This beast dwells in pits of flaming hot mag-ma. Word to the wise: Once you hear him screech, you better take cover before you’re lit up by a barrage of fireballs. He doesn’t stay exposed for long, so get your shots in when you can. They’re pretty hardy fellows, so consider using some of your stronger weapons.

You’ll have to discover the other monsters yourself. 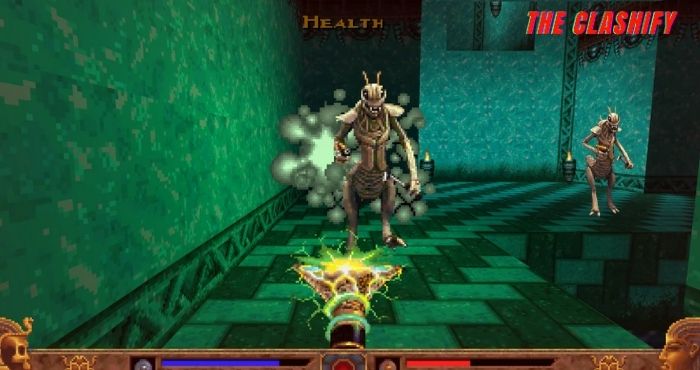 As you make your way through the game, you will need to overcome a number of obstacles, traps, and monsters. In this part of the guide, we will go over a few of the games basic mechanics to help you on your journey.

Ammo in PowerSlave Exhumed is universal. That said, each weapon has its own supply. You can replenish your ammo by picking up blue orbs from monsters you kill, or via full-ammo pickups hidden around various levels. Ammo will be restored to whatever weapon you have equipped when you pick up the orb. If you’re unable to pick up any ammo for your current weapon, cycle through your arsenal to see if there’s something else you can top up!

Occasionally you may find a purple ‘power orb’ upon destroying a pot, vase, or other similar container. Picking it up will briefly grant the ability to fire their equipped weapon at a very rapid rate. Use this rare opportunity to wreak havoc on anything that moves!

Dotted around various levels you will find spinning red and gold ankhs. These will increase your maximum life, represented by an additional circle below your health bar. There are a total of five ankhs to find in the game, and you’re going to need all the health you can get to survive.

A secondary objective to PowerSlave Exhumed is to find the eight radio transmitter pieces in order to achieve the good ending. These pieces are spread across different levels which can be identified by a beeping noise heard on the overworld screen. You will also hear a beeping sound when you’re near the item while playing the level itself. They’re usually well hidden, so keep your eyes (and ears) open!

During the course of PowerSlave Exhumed, you will acquire six ancient Egyptian artifacts that give you the special unique abilities necessary to progress through later levels of the game. The abilities are as follows:

Due to the game’s non-linear level progression, you will occasionally have to replay previous levels and use a new weapon or ability to get to a previously inaccessible area and find a new exit out in order to proceed. If you find yourself unsure on where to go, simply look at the overworld screen for multiple arrows stemming from a level. This means there is more than one exit. Alternatively, you can visit the spirit of King Ramses in his tomb in Karnak for some direction.

The levels of PowerSlave Exhumed are often labyrinthine and complex. It’s not uncommon to get a little lost whilst exploring the many ancient Egyptian tombs, temples, and grottos. Like many games of its era, the game ‘draws’ the level as you run around, which can be accessed at any time – both as a wireframe overlay, or fully textured. If you look carefully, you may come across a map pickup which will automatically draw the whole level.

A strategy you’ll want to try and adopt, especially when playing on higher difficulties, is to exploit the AI and cause monsters to fight among themselves. With practice, it can be relatively easy to bait Anubis Zombies into lining up behind another enemy and having them fire their projectile into the back of another monster. Even if they don’t start fighting among themselves, they’ll at least still do damage.

Late in its development, Lobotomy hid 23 Egyptian dolls bearing the teams faces and sprinkled them throughout the game. These were notoriously hard to find. Powerslave Exhumed has raised that number to 31, with every level containing at least one doll, so get hunting! Just keep in mind that some dolls will not be accessible immediately.