Reverie Knights Tactics is a turn-based tactical role-playing game with strategic fights in isometric grids, where every decision you make can change the tale and the way the characters are configured. Set off on an adventure to find Lennorien, a long-lost elven city, in order to save your loved ones while battling the goblin threat that has terrorized the continent.

Lead your team of heroes, each with their own unique talents and skills, allowing you to employ a variety of battle techniques to vanquish your foes. In an epic adventure, visual novel format, explore a magical realm with a rich map and scenario exploration! Craft new items and accessories from the treasures you collect and use them as a tactical advantage every time you configure your characters.

Fren, who used to be a ranger in Lenórienn’s heyday, now lives alone in the woods surrounding Rarnaak, the ruins of what was once his city. The Order of Tanna-Toh approached him and asked him to lead Aurora’s expedition into Myrvallar Forest, a duty he agreed to do only after he was persuaded Aurora and Brigandine had what it took to survive in such a difficult environment.

Fren, like most elves, can have an arrogant sense of superiority toward those around him, and the forest’s isolation has left more than a few scars on his personality. Most importantly, Fren’s time in the wilderness taught him to hit hard and fast. He has a multitude of techniques to inflict damage on numerous adversaries at once, including his Focus attack.

As a ranger, he is in general attuned to his surroundings, and to an extent can also use the forces of the forest to hinder and restrain his enemies.

Brigandine is real, cheery, and, despite her airhead tendencies, incredibly attentive to those around her. Brigandine is known for her ravenous appetite, and while she eats far more than her size suggests and has a palate that accepts a wide variety of foods and flavors, she has a weakness for sweets and pastries.

Brigandine is a strong soldier in her own right, but she is terrified of anything with a ghostly nature: spirits, wraiths, and apparitions are the bane of her existence, and her friendship with Aurora is one of the few things that would motivate her to embark on a perilous journey to a land teeming with spectral threats.

On the battlefield, Brigandine is not easy to take down with her heavy armor and enormous shield. She can on the other hand push enemies around and control the battlefield with her… The unique way of taunting enemies.

Aurora, a cleric of Tanna-Toh, Goddess of Knowledge, is no stranger to adversity, having grown up on the streets of Malpetrim. She scraped together food and money in every way she could until she met Marius, a Tanna-Toh diplomat who took her under his wing and eventually became her tutor and father.

Aurora was reared inside the Order of Tanna-Toh, becoming a dedicated servant of the goddess with great respect for information from all sources as her life transitioned from perilous to safe.

Aurora was irritated when her adoptive father Marius decided to undertake the task of extracting whatever wisdom could be gleaned from the fallen city of Lenórienn, and when he failed to return, she knew it was up to her to bring him — or at least his memories — back. She would save him, just as he had previously saved her.

Marius, Aurora’s adoptive father, Aurora is far from helpless; as a powerful ice-based spellcaster, she is capable of doing substantial damage, and her magic is truly formidable. Her long studies have given her the power to heal herself and her comrades with her spells, so she’s more than simply a destroyer on the battlefield.

While the Helladarion, a massive, living artefact in the Caves of Knowledge, leads the Order of Tanna-Toh, movable platforms of the Helladarion can be found around the Kingdom at various temples dedicated to the goddess. One of these mobile platforms is Hellaron, which is capable of several of the Helladarion’s abilities, such as absorbing the memories of individuals who have died away.

Hellaron has been keeping an eye on Aurora since she was taken into the order, and he couldn’t stay away when she needed him on her quest. As a mystical being, he has instant access to a variety of abilities and spells that provide tactical advantages in battle. However, don’t be fooled by his peaceful manner; he is perfectly capable of causing harm when he sees fit.

Who is making Reverie Knights Tactics?

The game is being developed by 40 Giants Entertainment – a transmedia company based in the south of Brazil, set to work on various products for the entertainment industry, such as video games and comic books, using original or licensed IPs.

In the world of Arton, the elves arrived in the continent of Lamnor, constructing the great Elven City of Lenórienn, although the area was already occupied by many goblinoid tribes.
While Lenórienn soared as a bastion of culture and civilization, the elves were isolated and xenophobic… resulting in a conflict with the goblins that lasted nearly a thousand years, ending with Lenórienn overtook and corrupted.

A few decades after, the Order of Tanna-Toh took it upon itself to recover whatever knowledge was left in the remains of the city, sending an expedition led by a man named Marius. Three months later, not a single word was heard back from them, and the worst was to be expected… They had to be rescued.

For such a task, Marius’s adoptive daughter, Aurora, was chosen to lead a new expedition, with the help of her best friend Brigandine and Fren, an elven ranger who survived the conquest of the city, along with Hellaron, a golem of the Order. Together, they will brave the continent to gain access to the city, and discover what secrets lies in these lands. 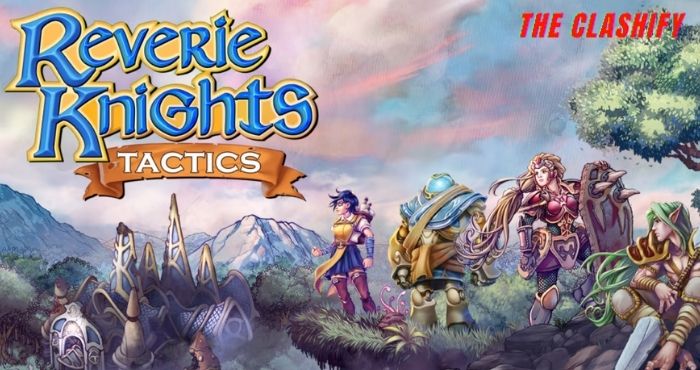 Reverie Knights Tactics will be released on 25 January, 2022.