Hey guys Today, I will be showing you guys an extremely powerful Royal Ghost Battle Ram Deck 2022 with Royal Ghost, Battle Ram, Bandit + Inferno dragon This Royal Ghost Bridge Spam Deck Is very Good For Grand Challenges and Arena 10+  and In this deck Battle ram, ghost and bandit are great units to use to apply pressure at the bridge.

so come and take a look at this Royal Ghost Battle Ram Deck guide. 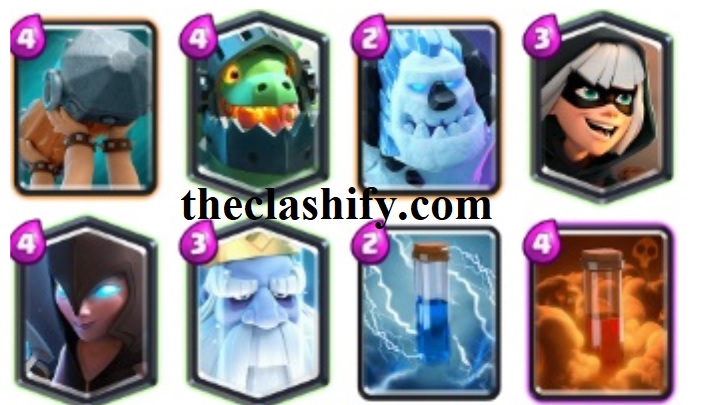 Royal Ghost: Easily one of the most over-powered cards as of now, this Card is insane.The royal ghost can be used on defense because he does a decent amount of damage. He must also be responded to on offense, Air troops can’t take him out if he is in Invisible mode Don’t hesitate to play him on defence against cards like Hog or Miner.

Night Witch: The night witch is a great in Defence because she deals a lot of damage With the help of bats You can use this card to clean up tanks. I think She is one of the best counter to the hog rider in. On the counter Push you can place Ice Golem, Royal Ghost or Battle ram and Pair her with the Bandit for a devastating combo.

Poison Poison is one of the strongest spells in the meta right now. This is because of the dominance of cards like Guards and Bats which can be easily countered with Poison. Use Poison to clear out the area in this deck. Use it destroy buildings, glass cannons, swarms and finish of towers. It is also an extremely good to counter Graveyard

Battle Ram: The Battle Ram is your primary win condition in this deck.A tourney standard ram can nearly take out a tower on its own if left alone and you would be surprised how often this actually happens. It is still a good card to use as a tank for Surviving Troops On Counter Push

Ice Golem. Mini tank/defensive meat shield.The Ice Golem has a very basic purpose. He is to guard your cards whether it be defensively or offensively that being said he is and incredibly valuable card and shouldnt be replaced.

Bandit: The Bandit has quickly become one of the stronger cards in Clash Royale If you don’t believe me just use the Bandit and learn for yourself. In this deck the Bandit offers incredible versatility. The Bandit can be placed behind a Battle Ram or paired with a miner for a surprisingly strong push. She can also be used on defense to clean up medium health units.She is now much more viable against enemies and efficient at chip damage.

Inferno Dragon. Tank defense/air defense.It does what it’s supposed to do. It quickly melts any tank that gets in its way.Use this in junction with Poison or Zap to clear about other troops and safely take out their tank. However, if the opponent runs decks suck as Hog cycle, the Inferno won’t be used most of the match.

In the early game Check out your opponent Cards and Let them make the first move and get the counter ready for their troops. Always Hold Your Cards like Inferno Dragon or the Night Witch as they are prime defenses for this Royal Ghost Bridge Spam Deck

you can Play Royal Ghost at bridge and apply pressure on your opponent and Make positive Elixir trades whenever possible and go on counter pushes immediately after.

Once you Are in positive Elixir trades or Elixir Advantage Make you Push with Ice Golem, Battle Ram and Poison with Royal Ghost

Do not Play Night Witch and Inferno Dragon and save them for tanks Like Giant, Pekka, Golem, Mega Knight and so on

Don’t use Zap the Goblin Barrel because the can’t Kill them save it save it for the Skeleton Army or rest for Opponent Inferno’s. Use your Bandit and Night Witch to defend against the barrels and get a heavy push going with the Ice Golem, Battle Ram and Royal Ghost

You can Use simple Poison or instead Ice Golem or Night Witch they will take out the Graveyard itself. Use Bandit to take out opponent Ice Golem and Knight.

Focus on taking out the support cards for the tank before taking out the tank itself. Ice Golem, Night Witch can take out most supports. Add a Poison spell if there are Minions. For Tank We have Inferno Dragon