Hello there, everyone! Today we’ll discuss Rush Royale Heroes and how to unlock them in the game. In the Version 4.0 update, heroes were added to the game. In Rush Royale, there are currently four heroes to choose from, each with their own set of abilities to help you in battle. There are Total of 8 Heroes in Rush Royale. 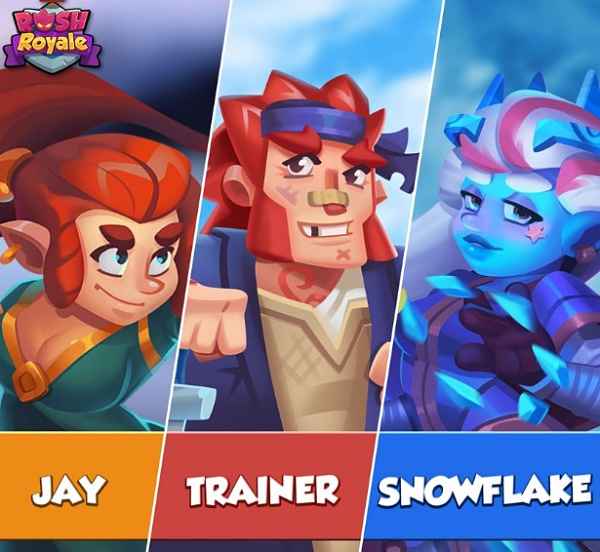 1.) Snowflake: is one of the best heroin Rush Royale. Snowflake is a powerful hero who can freeze and slow opponent movement. She can also have an effect on the opponent’s field, blocking their units for a short time.

2.) Zeus: Zeus is a Legendary type Hero and a Very hard hero to unlock in Rush Royale. Zeus Can instantly destroy an enemy with lightning. Significantly increases your critical damage and Zeus also has a chance to increase a random unit’s merge rank when you spawn or merge it.

Jay’ is a rare type of hero card that Can deal damage to enemies with her active ability, which also recharges faster if there are archers in the deck.

5.) Trainer:  Rush Royale Gadget Trainer is a common hero in Rush Royale. It can temporarily pause enemy movement on the field and also passively buffs your units.

6.) Gadget: Rush Royale Gadget An epic hero in Rush Royale, who can summon mechanisms that make your units much stronger. You can find fragments of this hero in the Hero Chests.

7.) Necromancer: Rush Royale Necromancer An Legendary Hero in Rush Royale, Necromancer Can summon an immortal Lich with a daze aura, as well as prevent the opponent’s hero unit from using its active ability Units that are caught in the Lich’s aura cannot fight, and take some time to reactivate after leaving the aura.

Once it reaches the enemy gates, the Lich dissipates without dealing damage, and the active ability block ends.

In Co-Op mode, the summoned Lich blocks the monsters’ path for a time and lowers their armor when they are within his aura, while also increasing the damage taken by the monsters.

You can get Necromancer fragments from Rush for Glory rewards, as well as from a special chest that will be available at the in-game store while the event is active.

8.) Elementalist: The master of elements bursts onto the scene in the new update! This is the first hero with two battle abilities at once, to control and deal damage to monsters.

Unique ability — Power of the Elements. The ability’s effect will depend on the active element:

Meteor rain — balls of fire burst over your half of the field, dealing heavy damage and setting monsters on fire. The blasts also leave behind craters that temporarily block any surviving monsters.

Electric storm — heavy rain pours on your half of the field. Soaked monsters take more damage. As soon as the rain stops, lightning strikes, casting a debuff on monsters that deals periodic damage as a percentage of their current health and gives them a micro stun.

In meantime, you can find Rush Royale Promo Codes 2021 Here