There are 4 male classes for you to choose from and 4 male classes. Skyblade is developed and published by U1 DIGITAL TECHNOLOGY (HONG KONG)CO., LIMITED. The game is now available on Google Play Store. 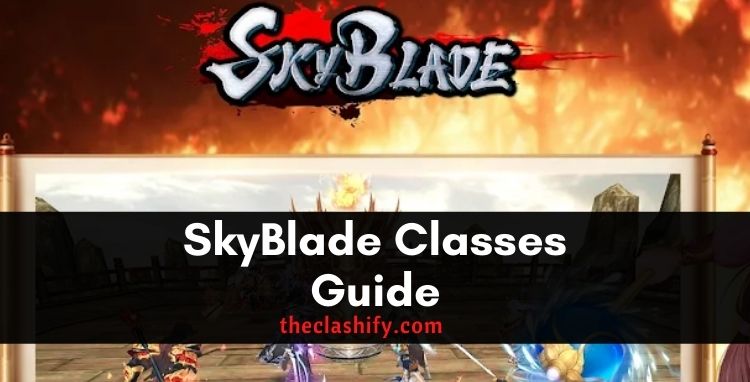 Ji Ro – His best quality is his agility and quickness. The dashing ability allows him to quickly stand beside an enemy, release the control he has gained, and control others at the same time. He has the ability to attack and defend, as well as advance and retreat. He performs admirably on both the offensive and defensive sides of the ball.

Il Geom – Il Geom, the new child from the underworld, has a powerful offensive ability and can inflict a lot of harm on his adversaries. Il Geom will have to pay the price of blood in order to maximise harm.

Il Sin – Il Sin, the enigmatic old guy who has such power over the enemies, wields a large axe. Metal is one of Il Sin’s five elements. His abilities include strong control, which can render the opponent immobile, as well as soft control, which slows down the opponent’s movement pace. His skills and basic attacks can both splutter at the same time, allowing him to swiftly solve several adversaries.

Nam Gung – Nam Gung, the undefeated God of War, has the highest defensive strength in the game. Nam Gung may kill the enemy with a single blow through counterattack, thanks to its exceptional survivability. When confronted with difficult circumstances, Nam Gung can use his skills to become resistant to control and therefore an undefeated God of War! The male classes of the game are introduced in the preceding paragraph. In the next instalment, we’ll give you an overview of the gameplay’s characteristics. Please keep an eye on our official website and make a reservation in advance to receive goodies.

Su A – Su A good at attacking from afar, and when the adversary isn’t close enough, he can penetrate the enemy with a bow. Su A has a solid understanding of the power of fire, but using the bow and arrows has the disadvantage of lowering her defensive characteristics significantly. Su A, on the other hand, will be invincible in battle due to his agile fighting. The most enjoyable aspect of the game is figuring out how to take advantage of range.

Thumb – She is the only class with healing abilities among the seven, and she is innocent and compassionate, with a unique method of combat – traps. It’s important not to underestimate the danger of walking on a trap. Taking advantage of the terrain to lower the thunder formations in order to deal with the adversary is a smart strategy.

Un Jeong – Un Jeong is a woman who is gaining courage by the day. She comes from a well-known family and has known Kan Ice’s magical talent since she was a toddler. She can quickly stockpile attack power for herself after activating Ice Lotus’ awakening state, making opponents fearful. She can also obtain the effect of free control and enhance attack speed after killing the enemy.