Hi guys, Welcome to our Soul Tide Wiki, In this Soul Tide Wiki, we will show you the Soul Tide Beginner Guide for New Players and complete the Soul Tide Walkthrough. Soul Tide is a unique game that mixes anime female collecting, home simulation, and dungeon exploring into one package. It takes place in a fictional world where witches have wreaked havoc on the earth, and players are tasked with reversing the tide.

How to play Soul Tide

Girls from other worlds gather, intelligent dolls are developed, and the characters are full of personality. Each character has its own background and source. For example: a cute little girl, and the leader of the underground organization behind it – Xingjian Yasha. She wears a little Lolita Lolita on the outside, and her back is a sickly and blackened scythe, Felicia.

The strategic layout in front of the station tests your tactical strategic layout, and a large number of detailed layout methods help you to overcome difficulties in the process of exploration. Brainstorming > Hands-on, a reasonable match is the key to winning.

Endless exploration gameplay, free customization of growth routes, all random levels are a new experience every time, and every step is a new surprise.

Challenge the tower of extremes, fight the shadow of the dragon clan, and complete the strongest trial challenge of the puppet master, you are the top 1 of the new moon continent. 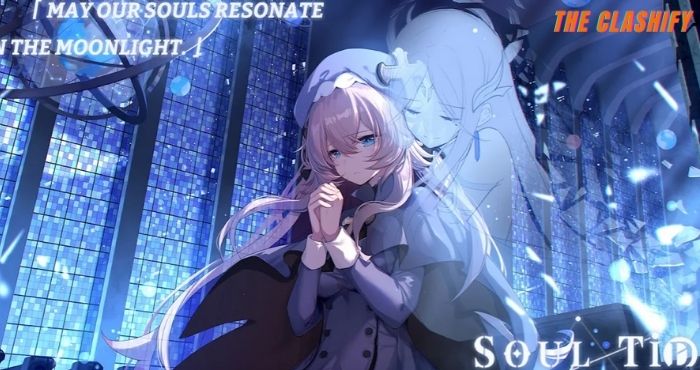 Start with the big concept. There are currently 5 element attributes: physical (white), magic (purple) , ice (blue) , fire (red) , and thunder (yellow). Each attribute has some main debuffs, first understand Check out these debuffs

Bleeding (Effect of each layer: At the end of each round, you will be damaged by 2% of the attacker’s attack power. The upper limit of bleeding layers is unknown, and currently it can exceed 200 layers. It is mainly used for the character Ye Yinliu’s ultimate move to increase damage. Hidden Liuli’s ultimate damage increases by 5%, the upper limit is 30 layers, or with Nicolette and Kelu Xueer as the core, superimposed hundreds of layers of bleeding for output, the current best long-axis play) Stun (can’t act)

Dark Eclipse (Effect of each layer: +4% damage received, up to 10 layers)

Burning (Effect of each layer: 0.5% of the carrier’s maximum HP is damaged at the end of each round, up to 10 layers, and the upper limit of damage per layer is 15% of our average attack power)

Arrange according to attributes

When a novice considers teaming up, the highest priority should be given to a combination of characters with the above debuffs. A combination of one attribute should have at least 3 characters of the same attribute for the combination. For example, the best fire team is: Satya, Nicolette , Shoye Mako, it can be said that the speed of light hits 10 layers of burning

Use the corresponding element attribute to destroy, each attack can hit one layer (multiple layers can be hit in a combo) When the number is 0, the weak point is exposed, at this time, the monster receives +100% damage (including burning damage), which lasts until the end of the next round . At the same time, breaking the weak point will restore the rage of the whole team

How to exploit weaknesses

Common ways to use weaknesses: do not hit the weak points of the last 1 to 2 layers of the card , hang buffs and buffs first, or save rage and other big moves.

Huge level map to enjoy the fun of exploration

After entering the realm of witches, in each small chapter, the puppet master needs to explore, solve puzzles, and fight to finally reach the “boundary point” of each level. The “boundary point” mentioned here is the realm of witches and new The connection and communication point of the Moon Continent is also the endpoint of each small area. After the puppet master reaches the boundary point, the level can be officially ended, and a large amount of puppet development materials, gold coins, gifts, etc. can be obtained.

On the way of exploration, as the difficulty of the level map increases, various settings such as fork roads, portals, hidden routes will be added continuously. Many times, the puppet master needs to keep a clear head, don’t be afraid of the darkness and fog, clear the goal and work hard to move forward .

After the exploration is completed, you can end the settlement; if it still does not reach 100%, please ask the puppet master to carefully observe whether there are hidden organs or key props around you, or you may have missed something in the choice of the fork.

Some important information, at this time, if you go back and check it again, you may have new discoveries. Of course, there is no direct relationship between 100% exploration degree and whether this level is cleared.

In other words, even if the exploration degree is not full but successfully reached the “boundary point” for settlement, it will be counted as this level has been passed, and the puppet masters need not worry because Getting stuck in a certain level will affect subsequent exploration adventures.

That’s it for this Soul Tide Wiki Guide