Hi guys, Today we will talk about Super People CBT Guide This is a Super People Beginner Guide that means It contains all of the necessary information for new players to go right into the game and pursue their first “Super Sweet” – winning a game in Super People CBT.

So come and take a look at this Super People CBT Guide.

Super People is an online multiplayer battle royale shooter game developed by Wonder People. Players parachute into an island where they will gather weapons and supplies before engaging in combat to be the last man remaining. When an ice storm is approaching, the available play area reduces. Each player controls a unique super-soldier with nine distinct powers and one ultimate ability. Players can choose from 12 different classes in Super People

First and foremost, players must select their preferred game mode: Third-Person Perspective (TPP) or First-Person Perspective (FPP) (FPP). Then users must choose whether they want to play solo (solo) or with a team (squads of up to four players or duo). It will begin a game within the same game mode.

TPP players will not be able to play against FPP players, and all teams in the game will have the same team size (solo, duo or squad). Squad is the only exception, as you can choose the size of your squad.

Super People Beginning of a Match

After a brief warm-up, the players are loaded into helicopters and given instructions on when and where to parachute. New players frequently choose to land in low-density areas in order to equip themselves with weapons and gear before engaging in combat, while some experienced players choose to engage in combat immediately after landing.

As soon as you land, you need to start looking for guns and gear. Most of the loot will be found in buildings so pick one, enter it and start going from room to room in order to find the stuff you need.

In order to be able to loot more stuff, you need to increase the capacity of your inventory. There are two types of items that will help you with this – backpacks and vests. It is just as important to find a weapon early, especially if other players have landed near your landing spot. The gear in Super People can be divided into the following categories:

Make sure you don’t fill your backpack with stuff you don’t need – ammo for weapons you don’t use or materials that won’t help you. Additionally, there are vehicles you can find on the map to help you transport you and your teammates to the safe area. 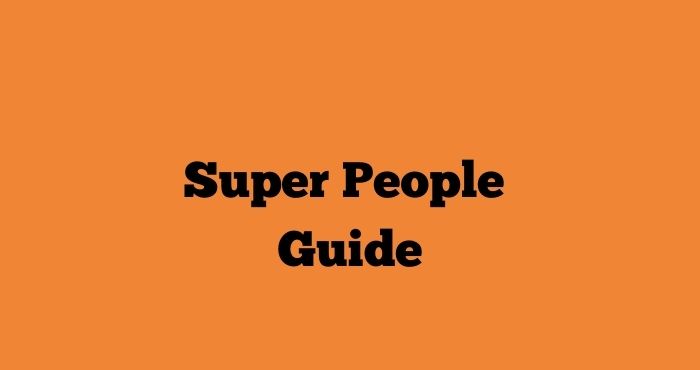 Leveling in Super People is an essential part of the game. Your character can level up to level 27 and each level opens up an ability. Abilities are split into 3 groups – red, blue and green. The fastest way to level up is if you find and consume capsules. There are 5 kinds of capsules in Super People:

Another important part of Super People is crafting as your weapons and equipment also have levels. Weapons, vests, helmets and backpacks can be upgraded up to Level 7. In order to do it, just find the required materials. To help you find materials, you have a detector which shows you the nearby materials on the mini map.

The goal of the game is to survive, while being pushed by the ice storm towards your opponents. There is no single valid winning strategy so you can pick your most favorable one – either engaging in battles or running from enemies, taking higher ground or hiding in the bushes. Just make sure you’re the last to survive and use your special abilities and an ultimate properly so you can have the advantage in every situation.

To learn more about the abilities and ultimates of every class, head to the classes section.

Using your weapons properly is a key aspect of winning fights in Super People. The different kinds of weapons can be divided into the following groups:

Around the map you’ll find gold and you can track your gold on the top right of your screen. You can use this gold for: