Hi Guys, Today I am going to show you Tears Of Themis Character age, blood type, gender, occupation, height, and more. There are four Tears of Themis characters with whom you can interact and be blown off your feet.

Let’s have a look at each Tears Of Themis Character one by one. 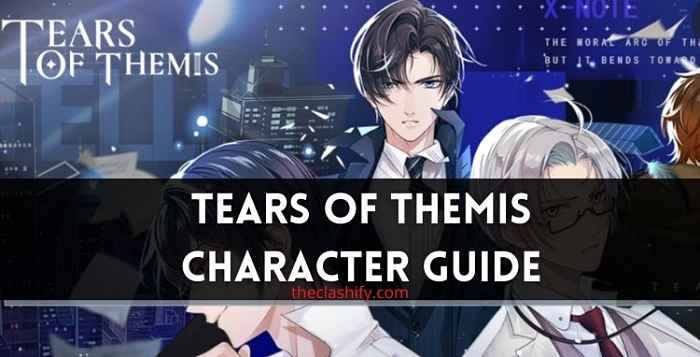 A professional private investigator who’s always a step behind when it comes to love.

An outgoing private investigator who inspires hope and light in those around him. He is capable of doing a wide range of tasks without breaking a sweat. Tracking, sniping, combat, tactical driving, and wilderness survival are just a few of the skills you’ll learn in this game.

He’s practically unbeatable in almost everything… except expressing his love for the girl he grew up with… Luke is still the same happy yet shy youngster he was when they reconnected after many years apart.

Tears Of Themis Luke Pearce about

An heir to a massive corporation whose ways are always out of the ordinary, and who never follow the rules.

Marius portrays himself as a carefree, rebellious playboy in public to hide his actual character. This is also why the general public questions his ability to inherit and oversee such a large family enterprise. Born into a world rife with power battles.

Marius had had enough of the scheming and politics. It’s an unavoidable masquerade ball, and all Marius wishes for is to never find his ball partner and be the only one who falls into this deep pit.

An attorney who has never lost a case in his whole legal career. His knowledge spans a wide number of subjects, demonstrating his elite standing among his peers. He has an inconceivable standard that he holds himself to.

He only accepts his best effort, and he never gives up. He is able to remain cool and rational at all times, which makes him dislike those around him.

He is mockingly referred to as an emotionless robot defense attorney by the media. They have no idea that Artem has become accustomed to concealing his feelings and instincts. No one can really fathom the kind of past he carries

Tears Of Themis Artem Wing  about

A psychiatrist who is able to see through all disguises. A top psychology expert who turned down numerous employment offers to pursue a career as a psychiatrist in Stellis City.

He exudes elegance, and nothing appears to be a challenge for him. Those in his immediate vicinity are at peace, and they instinctively open up to him, revealing their actual selves.

Vyn, on the other hand, who had always seen the turbulent human emotions from the outside, had never anticipated becoming one with them.

Tears Of Themis Vyn Richter about