In update 1.4.4, Relogic pleased players with three new world seeds that significantly change the game. If you have already completed Terraria in all possible ways, it’s time to start playing these maps.

The developers have created a seed in which there are no usual traps at all … So you might think when you read the name of the seed. But don’t jump to conclusions. You have never seen so many traps on the screen at the same time.

When creating a world, one message will be changed, namely Plasing traps will be replaced with Not plasing traps .

Traps begin to be found everywhere, even at the very surface. New types of traps also appear, such as a jumping cobblestone.

Chests will contain poison traps that release fart gas when opened. And at the entrance to the desert pyramid, a pleasant surprise will await you. Look for all this and much more in the No Traps side .

When creating a world with this seed, the Terraria logo will turn upside down. The initial spawn point is in Hell, and instead of a Guide, a Tax Collector will spawn with you.

In hell, you will be greeted by new Ash Trees, from which a new type of wood is mined – Ash Wood. You can still ascend to the surface, but the surface is always night and everything is corrupted by Warp. Live trees are dried and have no foliage.

The fortress was repainted in dark purple, and instead of clouds in the sky, corrupted blocks (a new type of blocks). The Lizard Temple is now on the jungle surface and has been repainted purple to match the atmosphere.

A huge Mushroom biome stretches along the entire lower border of the world, separating the player from the caves.

In hell itself, under your feet, you will not find any resources other than ashen blocks. You need to climb into the caves and look for resources in them.

All this can be found in the Don’t Dig Up side .

The final seed, Terraria’s Magnum Opus, according to its developers, is a seed that mixes all previously released secret seeds.

This is impossible to describe in words, so I advise you to familiarize yourself with the previous guides on seeds for my authorship.

Also, a “new” boss, Mehduza, was added to this Terraria 1.4.4 Labor of Love seed. This boss is mechanical bosses connected together – the Destroyer plays the role of the “body”, Skeletron-Prime – the head and hands, and the Twins hover on all this disgrace and shoot at the player.

The Terraria 1.4.4 Labor of Love boss is summoned by OkRam’s Razor – the combined summons of mechanical bosses.

Knowledge Minute: Occam’s Razor – The principle that says: “You should not attract new entities unless absolutely necessary.” In other words, we get rid of the need to fight each of the bosses separately and summon them all at once.

This item is also a reference to the deleted boss from the mobile and console versions of the game, OkRama. 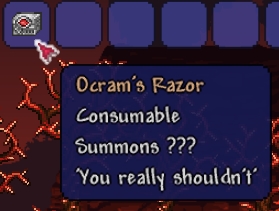 Upon defeat, the boss will drop Bags containing the reward of each of the bosses and a new melee weapon – the Waffle Maker, a large frying pan that throws waffles on impact.

This seed is extremely difficult and only the most experienced players will be able to do it. It will be a worthy test. Naturally,

it is allowed to launch such a world EXCLUSIVELY in Master Mode. Otherwise it doesn’t count) You can test your strength with the Get Fixed Boi seed