Hi guys, This is a The Planet Crafter Beginner Guide, where you learn about The Planet Crafter Equipment, Meteor Storms & Rockets, Base-Building 101, Late Game Strategies, Basic Tips – But Worth Reading Before You Start. Planet Crafter is a game about terraforming a dead world for future colonization.

It is still in early access so they might change things up later, but at this point, the basic story is: you’re a convicted felon, and you’ve made a deal with a mega-corporation to go prepare a far-off planet for colonization. If you succeed, you go free. If not, then you died far from home – because nobody is coming to your rescue. Also read here: The Planet Crafter Location Guide & World Map

You start out with NOTHING. Just a landing pod with a little crafting station. You’ll have to venture out of the pod to collect minerals with which to start building the equipment you’ll use to develop the planet into something people can live on.

Eventually, you’ll want to find a good location to build a permanent base where you’ll do most of your planning and workshop activities. You’ll also need to build several outposts around the world where you’ll be able to take care of your survival needs without needing to run all the way back to your base every time.

The further out you go, the more minerals you’ll find. And as your terraforming progresses, you’ll unlock more blueprints to make better equipment. You’ll focus on increasing four things: heat, oxygen levels, and atmospheric pressure. Those three things will then add into your total T.I. which stands for “terraforming index.”

Eventually you’ll also unlock access to a fifth parameter: biomass. As your T.I. increases past certain thresholds, you’ll see the face of the planet change in response to your efforts.

At the same time, you are on a LIFELESS LUMP OF ROCK IN OUTER SPACE, so there is no air or water when you start, and there is no McDonald’s so there are no cheeseburgers here. The gases are all trapped below the surface, and the water is all frozen.

So while you’re working on building terraforming equipment, you’ll also need to SURVIVE the elements. Watch out for your “food,” “water,” and “oxygen” meters, if any of them drops to zero, you die. You can refill oxygen by consuming an O2 Packet, or by simply walking into a SEALED ROOM that you have built. All “living compartment” rooms automatically generate oxygen for you. Water can be refilled from water bottles, which you can make by melting ice at your crafting station. Or you can build water collectors (which are unlocked MUCH later into the game) to generate water bottles automatically. To refill your health, you’ll have to eat. You start out with only a few packets of “space food” – basically the dehydrated stuff that astronauts eat.

Before you run out of those, you’ll have to find some seeds and build some farming equipment to collect vegetables that you can eat. Seeds are found primarily in loot chests, or scattered around INSIDE shipwrecks that you’ll find scattered around. And by that I mean “space ships” not “sailing ships.”

Basic Tips – But Worth Reading Before You Start 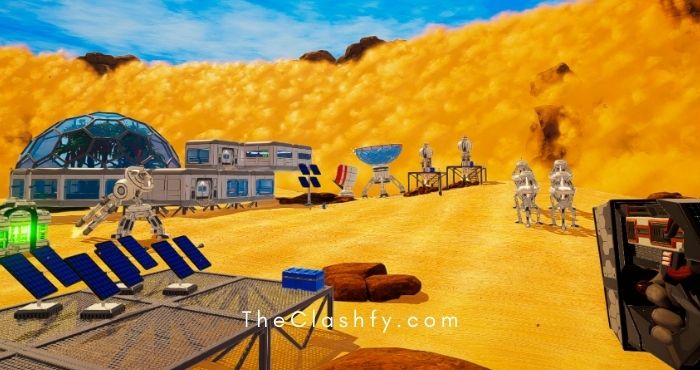 Some of the items in this game are not explained very well, you’re just expected to immediately know how to use it but they are a little bit complicated sometimes. Here are some tips to help you figure things out.

Open it up and check the blueprints for various items. Most of these are meant to be equipped to your multi-tool: backpack increases your cargo slots; jetpack lets you hover and move faster; agility boots let you run faster; and there are various other tools for you to try. Some items like the iridium rods, are meant to be used in further crafting.

Put any item into the small blue chest at the back, then hit the red button. The item will be disassembled – you get 100% refund of all the ingredients that went into that item. Example: recycling an Iridium Rod gives you 9 pieces of Iridium ore.

It’s a small box with a door on one side and a red button on the other side. Open the door and place up to 10 items inside, then press the red button to DESTROY all of those items permanently.

Open it up and put a veggie seed (mushroom, eggplant, squash, or beans) inside. Wait until the veggie grows. Aim at the veggie, not the machine, in order to harvest it AFTER it reaches 100% growth. When you harvest it, you get one veggie AND another seed to replant it.

Build this thing ON A PLATFORM. Then build a comm screen NEAR THE ANTENNA. If you’re too far from the antenna the screen will display an error message saying so. It lets you read some emails – which is how the STORY is told in this game.

Must be placed OUTDOORS. Releases, then bottles, methane gas and sometimes oxygen automatically. Open the device to collect the products.

This does NOT actually generate power like the solar cells; you take it into a shipwreck that has a Fusion Generator Core, insert it into that thing to open up some doors that were previously locked. Explore the rest of the ship. When finished, come back and you can remove the energy cell and take it with you to the next shipwreck.

Open it up and put a flower seed inside, it will generate oxygen. Different seeds give different bonuses to oxygen generation.

These must be placed on OPEN WATER, if you put it near the shore you lose HALF of the opportunities for it to produce algae because the solid land gets in the way. Once you build it, swim underwater and pluck the algae roots that hang down from the plants that grow around it.

These must be placed on solid ground. Grass will grow in a circular area around the machine.

Like grass generators, but flowers grow instead of grass. You must “open” the flower generator and insert a flower seed in order for it to work. Each type of seed grows a different kind of flower, as well as giving a different bonus to oxygen generated.

First you need to make a tree seed in the DNA Manipulator machine. Then you need to put a tree generator IN THE WATER but make sure it is right against the shore line and there is plenty of DIRT (not rocks) around it. Open it up and put the tree seed inside. Then watch it grow trees on the shore nearby.

T1 only has a screen for keeping track of your biomass progress, to unlock more blueprints along that line. T2 produces tree bark automatically every few minutes, collect it by opening the black panel on the wall near the door inside the dome. Bark is used to make tree seeds, and also to build a couple types of rockets.

Has a crafting station where you build fertilizer, explosive powder, bacteria, mutagen, and pulsar quartz.

The top screen shows a list of recipes you can use. The bottom screen is how you access the device. Insert all three ingredients. then hit “research” for a preview of what you’ll get. Then hit the button AGAIN to start the process. It takes some time (roughly 5 minutes) to produce a single tree seed. SECRET RECIPE:

Build it, let it generate heat. Must be placed INDOORS or else on a platform you build outside.

Build it, let it generate pressure (and a bit of heat). Must be placed OUTDOORS.

Build it, let it generate a bit of heat and pressure. Then it generates MINERALS automatically every so often. Open the storage chest (or locker) that is pre-installed on the machine to collect the products. The main ore that will be produced is shown at the bottom right of the menu when you open the machine’s storage. ALL extractors will also produce iron, titanium, silicon, cobalt, and magnesium as well as the main ore. The main ore will be determined by the type of soil you put it on.

It doesn’t matter what type it is (wind, solar, nuclear) they all work the same – just build it and let it generate energy for your other machines to use. It’s “wireless power” covering the entire planet. If your machines require more power than you’re generating, everything shuts down until you correct the problem.

Build the launch platform first. At the top of it is a computer screen where you can build ONE rocket at a time. It takes just a few seconds to build it, then hit the red button to launch it. READ the description of the rocket before you build it; each one has an effect on your terraforming progression – except the GPS rockets which allow you to use MAP SCREENS to display a map of the local area near the screen. You can build a screen at each of your outposts to display each local area when you get there, or you can carry materials to build one whenever you want to check the map, then disassemble it to get the parts back. GPS rocket T2 just increases the size of the area shown on the screen – zooms out the map.