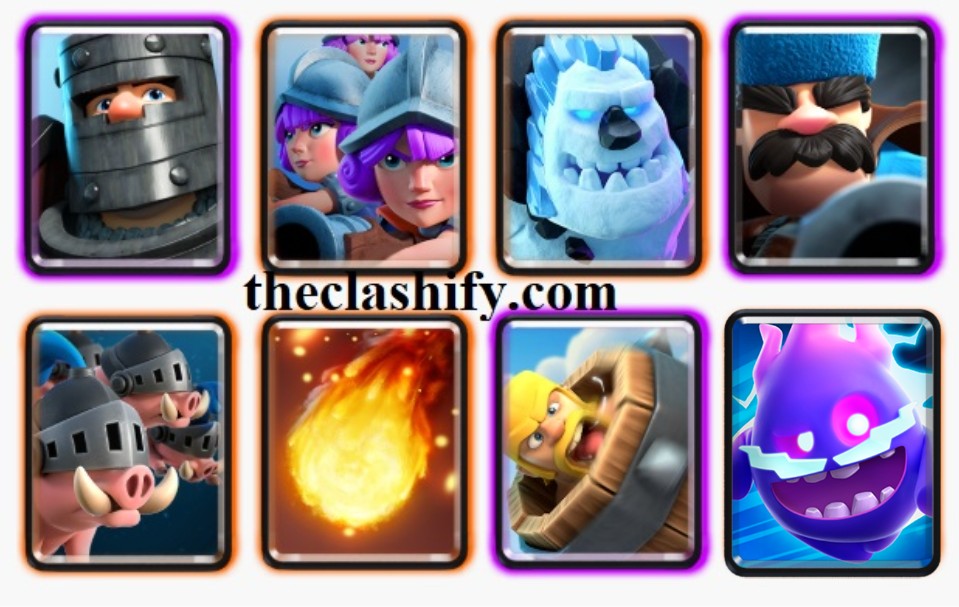 Royal Hogs: Royal hogs are your main win condition, use them to keep up the pressure throughout the match and force your opponent to play defence rather than offence. You can easily cycle back to these guys and always try to counter push behind other units if you get the opportunity. Remember you can use these guys to split lane push if your opponent has two or three counters to the royal hogs. Have your spells ready to support these guys once you hit double elixir.

Hunter: This card can be the MVP of almost any matchup. You need to find the right balance of where to place this card in order to get the maximum value. He is a solid counter to all tanks and his splash damage makes him great at helping take down swarm units. You can help protect this guy by using Ice Golem to tank hits from heavy-hitting units like pekka or prince. He’s also a good counter to hog rider and graveyard!

Barbarian Barrel:The new popular barbarian barrel can be used ti clear the lane for your push and to add an additional barbarian to a battle ram push.

Electro Spirit: One of the newst card in the game right now, For one elixir this card can be used to support your royal Hogs, which can potentially allow them to get so many extra hits on the opponents’ princess towers. It can also be used to support the hunter which can provide you with a counter push opportunity.

Ice Golem: This is your Mini tank/defensive meat shield. The Ice Golem has a very basic purpose. He is to guard your cards whether it be defensively or offensively that being said he is an incredibly valuable card and shouldn’t be replaced.

Fireball:  Fireball provides insta damage which is useful when playing against something like minion horde, can knockback which is important against hog and balloon.

Dark Prince: This is surprisingly versatile in this deck. For 4 elixir, he will counter any squishy troops, deals easily with barbs/regular barbs, and does enough DPS to help whittle down a tank. If he is charged when he hits on defense, he will have more leftover health for a counterattack, so place him in the back when you can. His shield makes him spell resistant too, which makes him all the more difficult to deal with when he’s defending. He can also go on offense when available and can do some serious damage with a couple of hits.

One of my favorite things about this deck is its ability to apply pressure in both lanes with the royal hogs, after a successful defense and you have surviving troops in one lane you can split hogs at the bridge to pressure both lane.

Hunter is your main defensive weapon against tanks, balloons, hog rider etc, protect him from ranged units like musketeer or magic archer.

The Ice Golem, Electro spirit, and Barbarian Barrel are the three-cycle cards you’re able to cycle to the key units you need to help defend, for example, the hunter for lava hound, etc.

You can also use this decks cycle power to keep up the pressure with the royal hogs throughout the match. You will also have opportunities to go aggressive with the Three Musketeers if you can out cycle units like Pekka, Mega Knight or their heavy spell like Fireball and Lightning