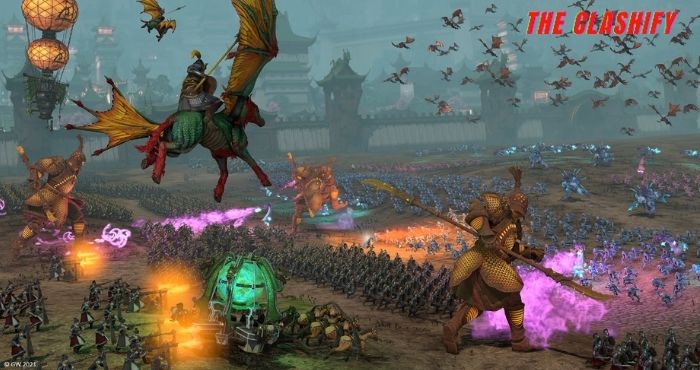 Change, hope, ambition, plotting, falsehoods, magic, and knowledge are all represented by Tzeentch, the Chaos God. Change is neither benevolent nor malicious; it simply isn’t what it used to be. Tzeentch has plans inside plans; he devises nefarious plots for villains and equips heroes with the foresight to foil them.

His disciples are usually in search of knowledge and power, and their transformed forms are typically unearthly and weird – especially when compared to other Chaos followers! His disciples are frequently endowed with supernatural skills.

Ogre Kingdoms are TWW3’s Early Adopter Bonus, which means they’ll be given away for free to everyone who preorders or buys the game within the first week of its release. They will be available for purchase separately as paid DLC after that.

Khorne is a playable race introduced in Total War: Warhammer III. Khorne is the Chaos God of blood, killing and rage.

Combat: A Khorne army’s battle resource grows with each kill, which can be spent on specific army skills. They have melee, artillery, and cavalry forces but no infantry that can fire from a distance.

Elite daemonic and mortal units with a preference for melee fighting and spell resistance.

Kislev is a playable race that was first presented in Total War: Warhammer III. They are a strong human nation in the Old World’s north, famed for their harsh winters and steadfast defiance to Chaos. Kislev boasts a large number of hybrid melee/ranged units, as well as strong cavalry and bear forces.

Kislev also produced Devotion by erecting certain structures and making some decisions, and it may be used to erect new structures and technologies. Chaos troops will be more likely to attack you if Devotion drops too low, such as by assaulting other Kislevite factions.