I’ll introduce you to some of the main key points you have to keep in mind when opposing your enemies. So come and take a look at the complete TWD All Star Classes Tier List Wiki & Alignment Guide 2023. Also, See – TWD All Star Codes Wiki (The Walking Dead All Stars Coupon Codes Wiki)

There are currently six survivor alignments in The Walking Dead: All-Stars. Each alignment is weak and strong against other alignments.

The alignment of survivors within a party determines bonuses during a battle. The advantages of each team’s bonuses apply to both the player and the enemy. Survivors of the same alignment can be combined to activate the following benefits: 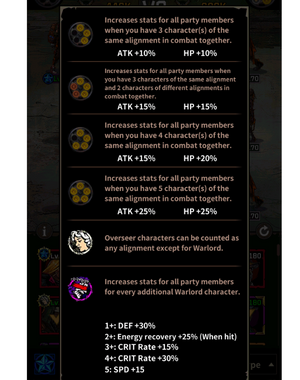 All survivors are divided into a total of five different classes. Every class has its own distinctive traits and areas of expertise. The classes are as below.

Tanks are the ones that fight in the frontlines. They will often intimidate the opponents and defend their allies from incoming attacks. This class is mostly formed with survivors who can utilize large body mass, but not always

The main role of support will be to cure the wounds of their allies. They will also be able to support by disrupting or confusing the enemies. Due to their line of work, these individuals will also possess knowledge for different areas of expertise.

Technicians are individuals that will perform long-ranged attacks with explosive and crafted weapons. They are highly skilled at operating different types of weapons.

Warriors are melee-type attack characters. They are combat veterans that have survived many battles against both the living and the dead. They will normally take on patrol duty or collect resources in the outskirts of the camps. They will take on any combat situations.

The main role of rangers is to scout the outskirts of the camp and find resources whilst clearing safe passages to their community. Due to their expert survivor skills, they are always calm during combat.

These characters will use their brute strength and physical abilities. As introduced in the previous showcase, Alpha is one of the strength-type Tanks.

These characters predominantly utilize firearms or explosives. I’m sure you are fond of Glenn from the showcase. He’s an Intelligence-type survivor with supporting skills.

These characters are agile and swift. One example would be Rosita, she is one of the Neutral-alignment survivors and an agility-type ranger.