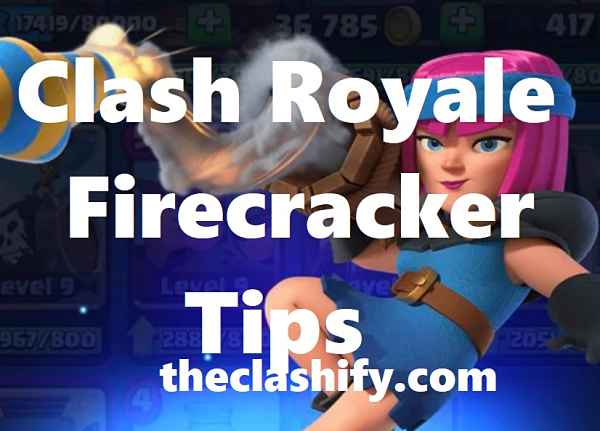 Another month, another card. And this time, I’ve got some good information to help you in the upcoming challenge. That’s right – after some stats were leaked in a glitch, I now have completed emulating the Firecracker!

For those of you that don’t know, I have recently been working on a project – to create a full Clash Royale battle simulation! And right now, I’m pretty much done. That means that the release is coming up soon!

I am posting some screenshots here: note that graphics are going to be pretty much nonexistent for 3 reasons:

As a disclaimer, please note: I have no affiliation with the dev team. As such, I just know what you all know stats-wise: they could all completely change by release. And since this is a non-official simulation, please note that not all of these interactions may be 100% accurate. 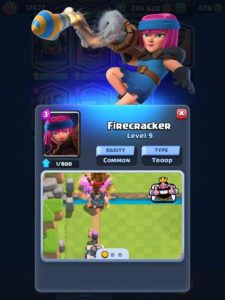 Italicized stats are not official and may be incorrect. They are used in my simulation to be as close as I can get.

The Firecracker is a 3-cost Common card that fires rockets at enemy troops. These rockets, upon contact, split into 5 shrapnel line AOE effects with a radius of 0.2, 5.5 range, and 15 degrees of a spread between each. Each projectile deals 53 damage and can hit multiple troops.

The Firecracker has a 0.6 second load time and will fire once every 3 seconds. It has a range of 6 and a sight range of 10.

Edit: I originally stated that its sight range is 11. This is probably not correct, but we still have not gotten actual stats for it, or a good video showing it, so…

After playing around with this card for a bit, I can say that it seems pretty strong attack-wise. It’s got a lot of advantages over similar troops, like the Archers and the Bomber, and it will destroy on defense. The recoil mechanic can also be used to insane effects – it can stay on defense for quite some time, and can pull off some MLG gamer strats to avoid damage. (See this clip from OJ’s video for an example: https://youtu.be/3Zti2J4eyvY?t=443) The massive sight range (greater than any other unit in the game, currently, and just short of X-Bow and Mortar) will also be huge, allowing for it to practically cover both lanes of defense(like a Princess). However, it’s got some massive disadvantages. It’s quite squishy, dying to Arrows and most other ranged troops, and it is super easy to trick into activating the King Tower.

Sight range is an often overlooked stat of a troop. However, this hidden stat is perhaps one of the most important to how a card is played – it can determine a card’s entire playstyle and the best way to defend it.

In general, units with large sight ranges are easier to distract and harder to take towers with than units with lower sight ranges. However, there are some advantages to having a larger sight range – in particular, if it’s paired with a long range, it can be used to keep the units safe from troops and spells while they have a great chance to defend.

As an example, think of the Princess’s usage in bait decks. Many bait players will cycle Princess in the back to start the game, or when they’re starting to leak elixir. However, unlike most other cards, the Princess is usually cycled towards the tower with the least damage.

Why is that? Well, since the Princess has such a long range, it will be able to defend the tower with more damage, even from the other side, if the enemy chooses to attack it. This discourages the enemy from rushing or trying to chip the tower. And if the opponent tries logging or countering the Princess? Well, then the troops or spells will only be able to attack or hit the tower with the most remaining health – where it doesn’t matter as much.

You’ll be able to use the Firecracker in a similar way – in fact, it will likely work even better, as its sight range is even longer, and it’s more spell-resistant. And since it has a generally stronger attack than the Princess, it’ll be even better at discouraging rushing.

However, keep in mind that defending on the same lane has its advantages – it’ll be better at hitting multiple troops, and its recoil will work to a greater effect there. Also, cycling the Firecracker will come with the risk of a King Tower activation…

King Tower Activations with the Firecracker

There are plenty of chances for King Tower Activations with the Firecracker. With such a huge range and spread, all it takes is one really good unit placement for an activation. But let’s just cut straight to the chase. 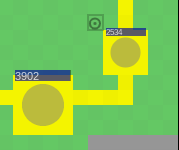 Units placed on this tile that are hit during or right after their deploy time will make the Firecracker splash the King Tower with one bullet with her first shot.

If the Ice Spirit is used for this, it will die in said hit, and the Firecracker will then hit the Princess Tower with a full-damage shot. Other units will result in less damage to the tower, naturally, but the unit will take another 265 HP of damage.

The second is a lot better, and what you’ll want to use for Skeletons to prevent all Princess Tower damage. 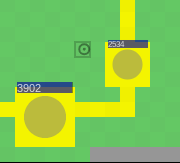 If the Skeletons are placed here and hit during or right after their deploy time, the Firecracker will splash the King Tower with one or two bullets. (Timing-dependent.) It will, however, fail to kill all of the skeletons in the first shot, leading to the Firecracker wasting another shot on them and then dying without hitting the Princess Tower at all.

This can be used with Wall Breakers and Fire Spirits to a similar effect. (Although they are 1 elixir more… still a positive trade though.)

It’d be a good idea to practice both of these in friendly battles – they are quite precise to pull off.

So what does this mean? Well, if you’re using the Firecracker, never send it in alone. Sure, it can deal 530 tower damage by itself. But it’s not reliable enough to trust it to do so – a good player will just activate the King with it and quickly dispose of it.

And if you’re facing the Firecracker… remember these tiles. They will serve you well.

Time for some cold hard stats just to ground this card a bit more. I’m only going to cover a few, as this card is better in the thick of battle due to its splash mechanics.

Offense vs. Princess Tower: 2 hits for a total of 530 damage.

Keep in mind that its recoil will push it back out of range – leading to a possible retarget for both the Firecracker and the Princess Tower. If used in conjunction with a Miner, it can take the tower down to 761 – the Firecracker tanking the first few shots and then defending the Miner. Not bad for a 6-elixir combo.

Defense vs. Giant: The Giant will hit 7 times, dealing 1477 damage and taking the tower down to 1057. The Firecracker goes back to its home in the back of the Arena.

Defense vs. Rascals: Can lead to a perfect defense (no tower damage) if reacted to quickly. It’s also possible to avoid damage to the Firecracker. Better than the info video would tell you.

Defense vs. Balloon: The bomb will connect, but the Balloon itself will not. Nice. (Good timing is required – it does get pretty close.)

Defense vs. Goblin Barrel: If the Barrel is center-planted, it will allow 2 stabs. (Not enough damage to kill the 2 goblins, but they die in 1 hit.)

The Firecracker will synergize with:

The Firecracker does not synergize with:

I hope you enjoyed reading this guide to the Firecracker!

I think that overall, it seems balanced – strong in some regards, but with some really big drawbacks. It should find a place in quite a few decks next season. I’ll definitely be trying it in mine!

If there’s one thing I would like you to take away from this guide, it would be that it’s its own card – it’s not the Princess, it’s not the Bomber, it’s not the Magic Archer, it’s not the Hunter, it’s not anything. I’m just comparing it to those to make the Firecracker’s new mechanics easier to understand. So in the end, play it like a new card – just remember that it has the versatility of a lot of the others that I mentioned.

And if there are two things I would like you to take away, the second would be the King Tower activations. They’ll be useful next season when we see this quite often.

Shaed by u/ScholarlyGaming Thanks For Sharing this Tips with Community

Thanks for reading this How to Use Clash Royale Firecracker Tips All comments, questions, and criticism is welcome 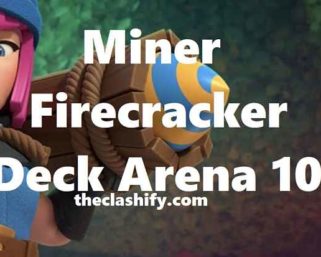 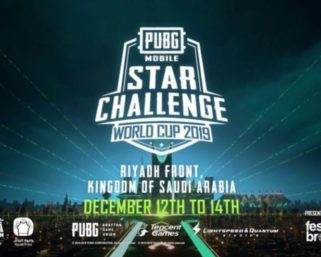 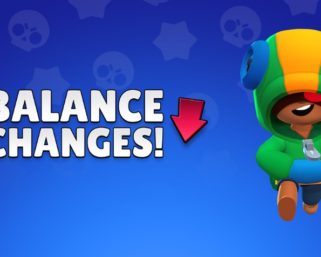 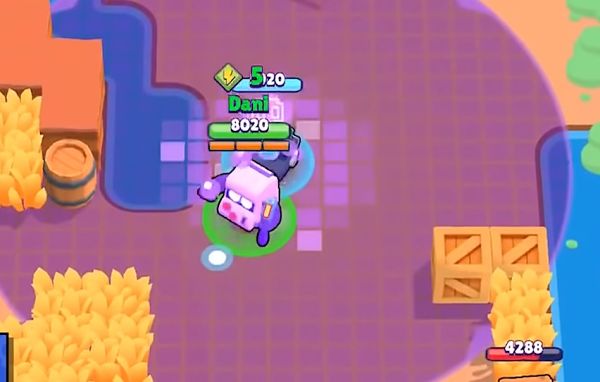 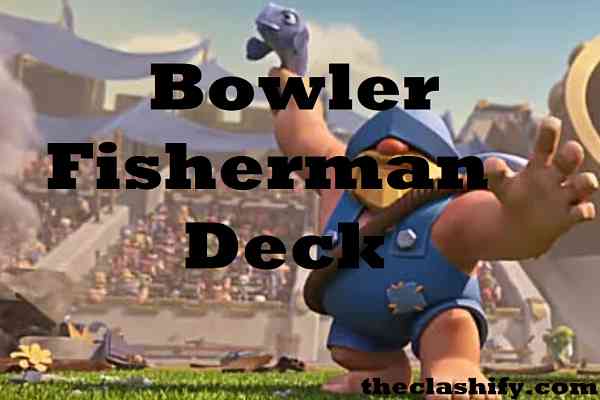 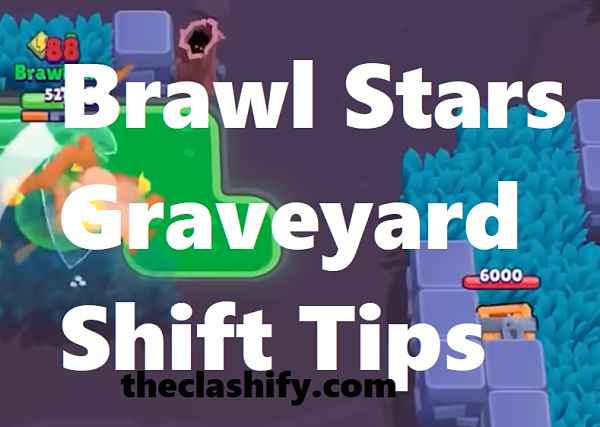