Hi guys, I will show you Wall Breaker Miner Poison Deck, This is a Fast cycle 2.5 Elixir Hunter Wall Breaker Miner Poison Deck which is very good for Grand Challenges and Ladder. This is a high skill and playing it will definitely help improve your all-round gameplay across the meta. You’ll rely on getting chip damage with you miner and spells then defend using your hunters d the smaller cycle 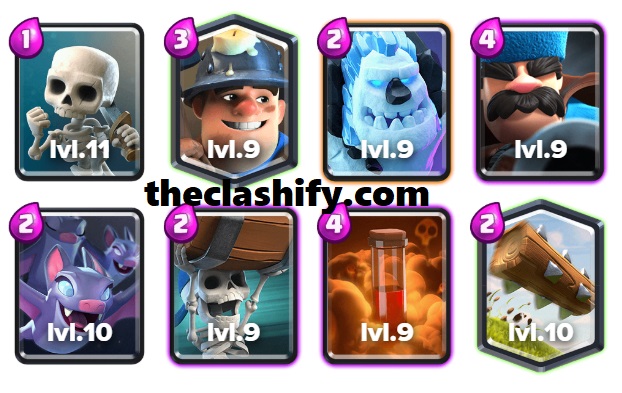 1.) Miner: Miner is your win condition, Miner is a great card to use to tank tower damage for your wall breakers. He’s also important to use to help get chip damage throughout the match. you’ll need to cycle him on your opponent’s tower to get damage. Make sure to switch up his placements so it’s harder for the opponent to predict where you’ll play him.

2.) Wall Breaker: A lot of people don’t split lane push with these guys however if you do split them it’s extremely difficult for most opponents to defend them cost-effectively.

3.) Ice Golem: Ice golem is a good glass tank just like the miner and him rascal boy. All these provide potential cover for your miner and make it harder for your opponent to defend the miner. You can use this unit to kite a Pekka. His frost nova works well with the snowball to slow units and also reduce their HP slightly.

4.) Poison: Your moderate spell and Miner’s best buddy. It can be used for two main things: Killing glass cannons (and Pumps) along with swarm clear. It prevents swarms from attacking your Miner and chips the tower as well. Use on minion hordes, glass cannons, whatever comes your way. Ice Golem+Miner+Poison is a beast 9 elixir push if you have a big elixir lead.

5.) Bats: They are amazing against any high DPS troop. Paired with the Miner they form an amazing push as it forces your opponent to split their troops or suffer massive damage from either Bats or Miner. AND that mini-push only costs 5 elixir

7.) Skeletons: This Card is incredible for 1 elixir.

This is a Fast cycle 2.5 Elixir Hunter Wall Breaker Miner Poison Deck, Hunter and Bats will help you to counter opponent Air troops and Ice Golem for kitting their tanks. The best starting moves would be Miner in the anti-tornado position, Bats in the back, or Ice Golem in the back.

This deck has its own advantages and disadvantages. Advantages are its cheap cycle allows us to cycle quick and no possibility of us being out cycled; Beatdown decks with huge tanks can be dealt with easily with our Hunter. The disadvantage is that due to its cheap cycle so many decisions have to be made and a small mistake may cost us the game.