This Anime Dimensions Character Tier List wiki will be divided into 5 primary categories rather than having too many tiers:

Tier S: Powerful characters with numerous modes of viability who presently control the meta or have done so for some time.

Tier A: either play a significant role, but only in one mode.

Tier B: characters that fit a specific specialization and are weak in that mode. 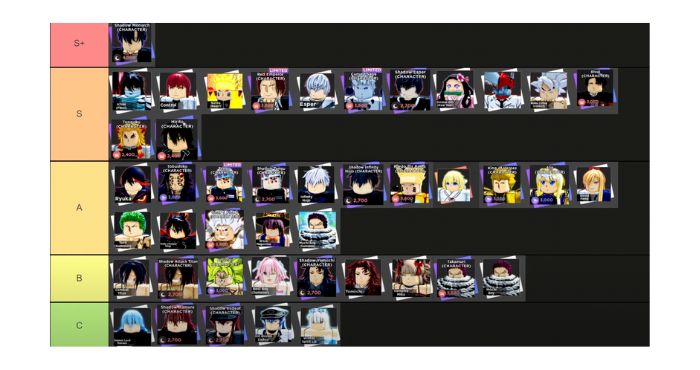 A limited character called Demon Girl (New Year) could be purchased from the store for 1600 gems. Nezuko Kamado from the anime/manga series Demon Slayer served as the inspiration for this character.

Nezuko is a fantastic character overall and one of the finest main characters and assists. She is now in fourth position behind Valentine’s Day character Nilim.

It drops at a rate of 3.5% after you complete the Sword Dimension.

He is reasonably balanced, with two ranged attacks that inflict respectable amounts of damage and an extended invincibility bonus from his ultimate. He is not, however, advised for good players.

The character Ryuka is modelled after Ryko Matoi from Kill la Kill. She costs 1,599 Robux to buy from the shop.

The only ways to get Ryuko are by using Robux or receiving a gift. For good reason, she is recognised as one of the game’s best characters. She has incredible damage output, and her moves are all-around useful tools.

Blood Ripper has a relatively short cooldown and is excellent for mobility. On the first strike, Decapitation Mode deals incredible damage and significantly lengthens your M1 range.

She is one of the best assists in the game and is playable in every game mode. Overall, she is a fantastic character who works in practically every circumstance.

A Certain Magical Index’s Accelerator served as the inspiration for Esper. He may be acquired via the Esper boss fight with a probability of 0.04% as a drop, or he can be purchased in the raid shop for 3,600.

Due to the quick initiation of his strikes, his boss fight is one of the toughest of the Raid Bosses.

The highest DPS in the game belongs to Esper. Similar to King of Heroes, his moveset consists primarily of multiple-hitting attacks with tolerable cooldowns and wide front AoE.

All four moves also have a short cast time and a decent or low cooldown. His fourth move draws the foes in, allowing him to serve as an assist, while his first move draws them closer you so that aerokinesis can stunlock the enemy.

Esper is one of the characters who didn’t get nerfed in the most recent patches and is therefore a fantastic choice for anything.

He can be purchased for 3,000 Boss Rush Tokens or received randomly (0.02% chance) as a reward for defeating a Boss Rush.

Broccoli is a fantastic choice for boss rushes and raids because of how much damage his attacks deal, but they lack AoE range and have a long cooldown.

A character called King of Heroes, who is based on Gilgamesh from the Fate series, can be acquired for 3,000 Boss Rush Tokens or as a reward for defeating a Boss Rush (0.02% probability).

The King of Heroes is a useful character to utilise in dungeons because his strikes have a wide AoE range and deal a lot of damage.

A character named Nardo Six Paths was created using the Six Paths form of Naruto from the Six Paths Sage Mode. He has excellent AOE, DPS, and overall damage, making him a fantastic help character. He is available in the Raid Shop for 3,600 Tokens

That’s it for this Anime Dimensions Tier List 2023 [UPDATED]