Hi guys, Today I am going to show you 5 Rush Royale Best Cards 2023 & Best Decks for F2P. This will help you to win more matches in rush royale and you can easily push your trophies with these 5 cards & the best rush royale decks if you use them in the correct way.

When we talk about cards in Rush Royale, so many people say that you need legendary cards to win matches in rush royale because Legendary Cards are more powerful full. Yes, they are powerful but the truth is that you do not need legendary matches to win matches and there are plenty of alternatives to them Like Engineer, Bombardier, Vampire, Sentry, Wind Archer, Thunderer, Crystalmanser, Plague Doctor, etc.

So, in this article, we have listed the Top 5 Rush Royale Best Cards & Best Decks for F2P in Rush Royale, after trying out the best possible ones Also Check Out Here: Rush Royale Promo Codes 2023 | Free Rush Royale Emotes

Also, take a look at this guide:

You can find all these 5 Cards in the Chests, or buying with Golds in Shop. 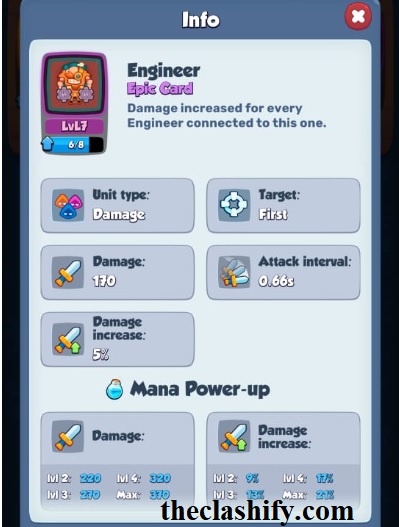 The Engineer is an Epic card in Rush Royale and you can unlock him at 900 Trophies from trophy road. He is the perfect DPS card in the game, and everyone uses this card around 1250 to 2000 trophies rage.

If you are in Arena 5 or above this card should be a must in your deck. This card comes in the Top Tier List of rush royale. Engineer is a very good card for Arena 7 and Arena 8 players. 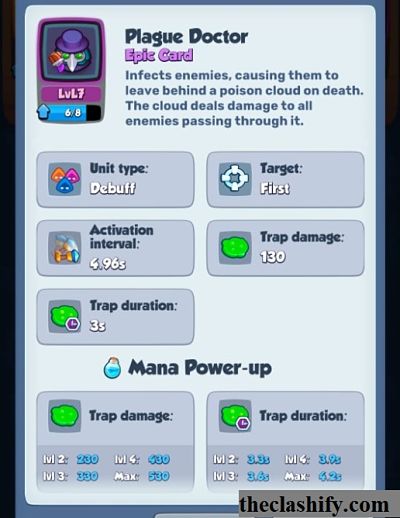 Plague Doctor is an Epic card in Rush Royale and you can unlock him at 1850 Trophies from trophy road, he’s pretty good in PvP mode. He’s not good in Coop.

Plague Doctor works like Poison, he deals damage to all monsters passing through it, basically, he is an area of damage card. The Plague Doctor is a powerful damage unit that attacks the first enemy it sees. Targets are infected by his attacks. They die and leave a cloud behind that harms everyone who goes through it. With each merge rank, the trap’s damage rises. 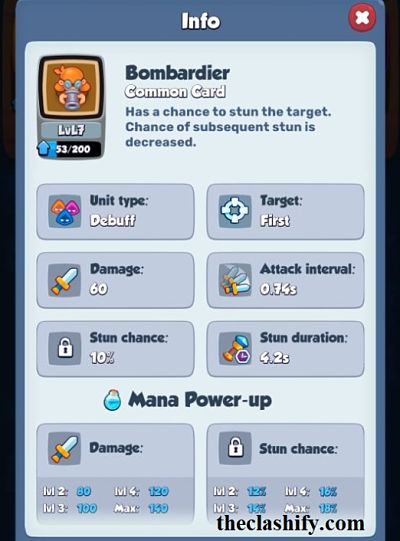 Bombardier is a Common card in Rush Royale and you can unlock him at 1650 Trophies from trophy road, Bombardier is the best Coop card, he will help you in every stage of the game.  Bombardier has the ability to stun a boss or monsters.

Bombardier is a very good supporting card if you have an Inquisitor Legendary card in your card collection. 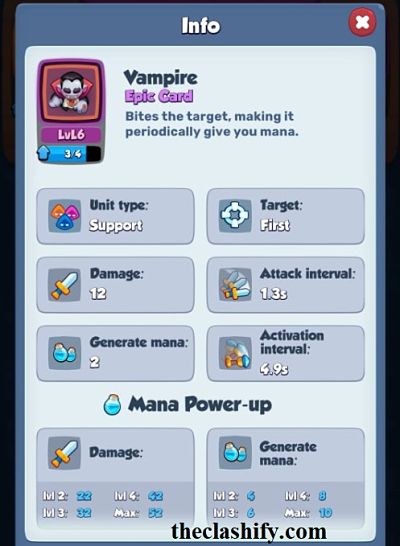 The vampire is an epic card in Rush Royale and you can unlock him at Arena 5. Vampire bites the target and gives you mana, this card is very for generating extra for your advantage. This is the best card of rush royale for Arena 7 and Arena 8 Players 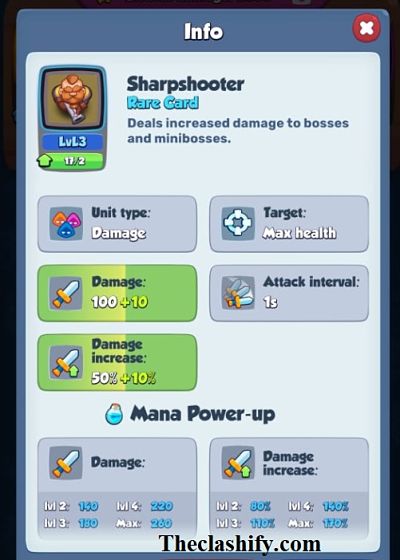 Sharpshooter does massive damage at max level. You can use him in both PvP and Coop and If you use sharpshooter in your deck keep in mind that he only attacks max health monster.

The Sentry is a rare unit that attacks the first target. His damage gradually increases in 10% increments to a maximum. As a damaged unit the merge rank only increases the attack speed by: Attack speed/merge rank. For example, a merge rank 3 hits three times faster than a merge rank 1.

If you are in arena 2 or arena 3 I will recommend you to play with Archer / Poisoner / Lightning Mage / Fire Mage / Ice Mage Deck. This deck is very good for low-level arena players.

If you have an Engineer in your card collection, you can replace it with Poisoner.

Vampire: At the beginning of the game you always want either 2 stages 1 Vampire or 1 stage 2 vampire. In addition, you also want to make sure you have at least 1 zealot before leveling up a vampire. The vampire is fantastic mana acceleration which helps speed the deck up and powers up zealot Continue Reading »

Try having only one Portal Keeper in the field since they don’t do much damage and their only use is to connect Engineers with each other.

Never level up (in-game) the Portal Keeper since the level-ups don’t increase his damage that much and he is not a damage type unit.

When it comes to leveling up in-game I would suggest prioritizing Chemist and Engineer, for more damage and armor reduction.

Don’t panic merge! If you see that enemies are over-running you, choose to merge Portal Keeper units and Vampire units first since they don’t deal a lot of damage Continue Reading »