So come and take a look at this Babylon’s Fall Guide & Walkthrough.

The story progresses when you complete “Campaign” missions.

You will deal less damage to foes and absorb more damage from their attacks if your current Power Level is lower than the “Recommended Power” for a task. Before embarking on a mission, make sure your gear is up to date to ensure you have the most powerful loadout possible.

To begin a new quest, simply go to one of your HQ’s Quest Boards and initiate a chat with the guard stationed nearby.

You’ll be able to see a list of all quests currently available to you, including those belonging to other players in your HQ, once you’ve entered the Quest Board.

The higher your Power Level, the more harm you can deal with your opponents. As a result, equipping objects with higher Power Levels is a simple approach to improve your battlefield effectiveness.

Furthermore, the Power Level of loot drops is directly determined by your current Power Level, so having high-level items equipped will ensure you get better loot.

The Conch Shop has a variety of Starter Packs to help new Sentinels get started. Simply strike up a discussion with Pygmalion in Sentinel HQ to gain entrance to the Conch Shop.

There are various Starter Packs to choose from, each with its own set of goodies that cater to a certain playstyle. Try them all out to see which one is the best fit for you. 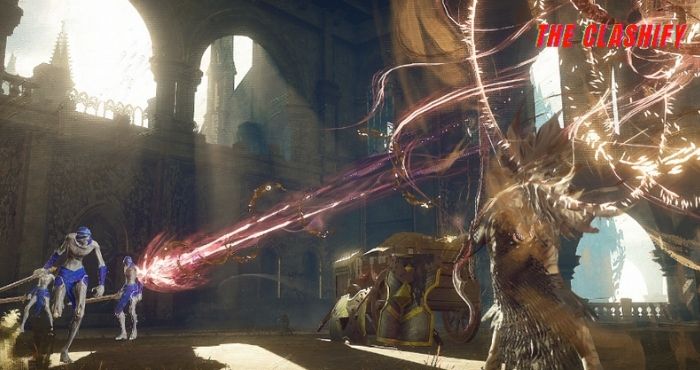 Create a Babylon’s Fall character to use in the game, selecting the combination of face shape, hairstyle, and other features that you want.

After completing the creation procedure, you can modify all of your choices except faction and kind.

You have the option of making up to three distinct characters. A character cannot be erased once it has been created. The deletion of characters will be made possible in a future update.

The Factions Characters have the option of joining one of three factions. The race you choose will influence how you can design your Gideon Coffin and learn Dynamis skills.

Huysians – Descendants of a seafaring monarchy known for its naval dominance. They are astute businessmen with refined tastes who favor exquisite weapons and apparel. Huysian Sentinels are known for throwing themselves into enemy lines with alarming speed, combining agility and aggressiveness.

Geleilions – Tribal hunters that live north of Neo-Babylon in the huge island woodlands. A coming-of-age ritual that requires them to carve an animal motif into their own skin exemplifies their intimate connection to the natural world. Geleilion Sentinels are experts in the use of various poisons and have a fondness for techniques that weaken adversaries and make them vulnerable to attack.

Agavians – Agafheim’s proud residents, who live in the mountains west of Neo Babylon in a well-fortified kingdom. They are skilled metallurgists who rarely wear anything than the toughest plate armour on the battlefield. Agavian Sentinels are known for their bravery, and they frequently act as the front line of an offensive, drawing enemy attention away from their comrades.

The Battle Pass is a mechanism that rewards you for unlocking tiers with Medallions and earning goodies (BP). Medallions (BP) can be obtained in a variety of ways, including missions and quests.

The Progress tab on the main menu can be used to check your Battle Pass progress at any time. You can also use Garaz to buy a Premium Battle Pass, which allows you to earn more goodies as you progress through each tier.

Each Battle Pass is only good for one season, so make sure you finish all of the tiers and get your goodies as quickly as possible!

So guys, That’s it for this Babylon’s Fall Guide & Walkthrough – New Players Guide