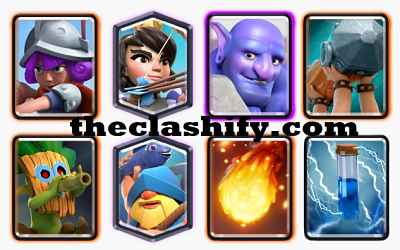 1.) Bowler: This guy is so expendable Tank, swarm control, and glass cannon removal with Fisherman and Princess, he can do it all!

This blue-dude right here can effectively shutdown GROUND pushes, making it as perfect decision countering Pekka pushes, this can’t be good synergy with the Battle Ram and Fisherman

The best part is, for as underrated as he may be, he can really pack a punch on offense and defense, killing Elite Barbarians, and most Hog Rider pig pushes as well!

He also has the ability to knock back several non-tank cards, making him a life saver and a great push dissector

2.) Dart Goblin: Incredibly obnoxious to deal with in my opinion. The longer he stays alive, the more value he gets in chipping troops.

Even though his last nerf made it so a Zapped Dart Goblin couldn’t get two shots on the tower, his chip damage is still annoying

3.) Musketeer – This card only left my deck ONCE since Global Launch (and that was recently). However, it has returned because it always the potential for great value. I

ts range, tankiness and damage are hard to find in almost any other unit for the price. Plus, it allows me to get away more often than not with the Princess first play.

I like to play Musketeer in the center tile with the lane of the Battle Ram and Fisherman to support the opposite tower.

4.) Princess: Your form of air crowd control. Kills Minion Horde, Skarmy, and Goblin Gang for a positive or neutral trade.

She also has long range, meaning you can place her in the left lane, and she may be capable of targeting troops in the right lane! She is a big threat on offense too.

Use her on her own to really punish the opponent after spending heavy amounts of Elixir, or use her with Bowler to rip through any swarm

5.) Fireball:This card is very useful on both offence and defence. On offence, It kills Minion Horde and really hurts anti-air troops. It can also be used with Log to kill such cards as well as to obliterate the Three Musketeers before they do any significant damage. Overall, it’s mostly self-explanatory.

6.) Fisherman: One of the bast card in the game, this is the bast card  to kite units into the range of your Bowler, It allows you to pull troops and a decent damage dealer making this guy so fit to go in every deck that’s why you always see him in every battle,

7.) Battle Ram: This is your Primary Win Condition we all know that how good this card is Two Barbarians holding a large log, dealing significant damage if they connect it with a building.

You’ll find that most of your pushes will be founded on this card, as you have several threat cards in this deck that an opponent with common sense will not let damage the tower.

Get creative with your ram combos, and remember to mix it up a bit so the opponent doesn’t know what to expect, Use this card when going for counter pushes

Play defensively. In earlt game you have to Use your Bowler and other defensive cards ( Bowler, Musketeer, fisherman )to shut down enemy pushes, then counterpush with your Battle Ram and Dart Goblin . Princess and the Dart Goblin also help on offense, allowing you to easily pick off Minions from a Horde.

Fireball any Pump or glass cannon you see.

At this point you will want to cycle Fireball and Battle Ram whilst still defending.

Once the Arena Tower is at 400 health or lower, you can use Fireball+ Zap to try to take the easy Tower.

So guys this was the Clash Royale Best Fisherman Deck