There are moments in history where games make the sorts of changes that actually affect the rest of the gaming world. In the case of microtransactions and loot boxes, it has had a bad and devastating effect on the gaming industry. However, there have been times when games have changed the industry for the better. Like when Half-Life showed us that shooters can have stories, or when Final Fantasy 7 showed us that Western countries like long RPG games too. Elden ring flaunts many modern gaming rules by ignoring them so brazenly that they are improving the gaming industry.

Contents show
1 The Picture That Says a Thousand Words
2 What About Breath of the Wild?
3 Massive Sales and a Massive Success
4 From Software Did the Open World Thing
5 Does Elden Ring Make Other Games Wrong?
6 Elden Ring Is Not a Perfect Game

The Picture That Says a Thousand Words

There was a Reddit post by somebody. It could have been originally created by u/gamboozino or by sjmaiimvool81, but it showed what the Elden Ring interface would have looked like if it were a Ubisoft game. 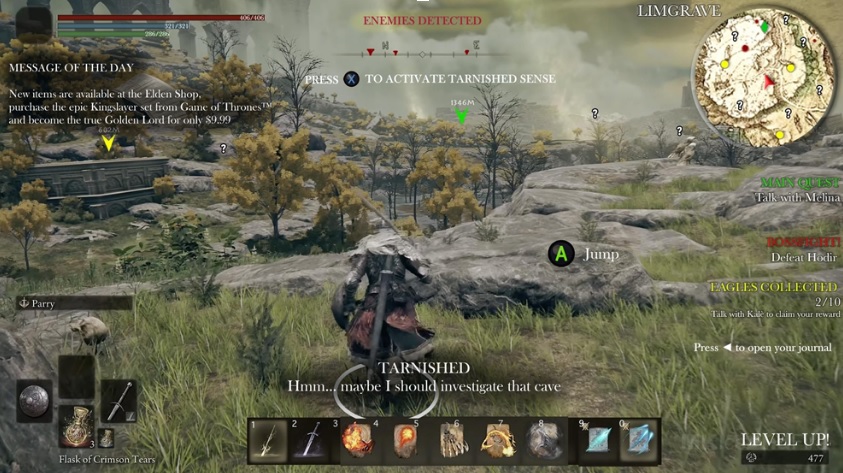 For those of you who are aware of modern gaming trends, you could probably take a look at this article’s title and then this image and pretty much understand this entire article. This image alone is a perfect example of what From Software “ISN’T” doing.

It reminds me of a line from one of the earlier Simpsons episodes (before it got terrible post-season 9). A jazz player is playing along, and a guy says, “Ugh, garbage.” And Lisa says, “Yeah, but listen to the notes she is not playing.” to which the man says, “I can do that at home.”

Take a look below at how the real user interface looks, and you can see all the notes “not” being played.

Elden Ring is so obviously breaking the rules, and by doing so, they are changing the gaming industry. Their success is what will create copycats, which means some of the good stuff we are seeing in Elden Ring will be copied into newer AAA games.

What About Breath of the Wild?

Zelda Breath of the Wild did a somewhat similar thing with its open world. It created a space where you were free to roam without being tied to markers, quest points, level gating, etc. They gave you a big open space to play with, yet it didn’t make a big impact, did it?

Plus, where Zelda changed things up and broke a few traditions, Elden Ring has gone a lot further. Far more money and a far bigger legacy were put at stake. The fact is that Zelda games are built so that if one game is bad it doesn’t matter, especially not to the overall plot, but From Soft putting out another Dark Souls 2 would have severely damaged their reputation and future profitability. Yet, Elden Ring took a bunch of risks that paid off.

Massive Sales and a Massive Success

Elden Ring will change the gaming industry because it was so successful. Within a month of release, it has sold 12 million copies. It had already made its money back and become a roaring success on top. Developers have yet more proof that holding players’ hands isn’t always required. It has shown yet again that a more mainstream gaming crowd can enjoy more difficult games. It has also shown that attention to detail is only important if it has meaning overall. Pretty skyboxes and pretty landscapes only enhance a game that is worth playing.

Did you ever play Red Dead Redemption 2 and park your horse near a cliff so you could see the beautiful views. They were amazing and a big selling point, but now consider if they were put into a game like “Ride to Hell Retribution” or “Sonic Boom.” People probably wouldn’t have even bothered stopping to take a look at the view. Cyberpunk 2077 was a perfect example of this. You take a look around at the distinctly modeled people, and you try to get invested, you want to love the game, but the game itself is so inconsequential and shallow that all the pretty settings in the world can’t save it.

From Software Did the Open World Thing

The next warning sign was the fact that George-won’t-finish-a-book-Martin was a writer. This was a warning sign because George’s last season of Game of Thrones was abysmal, and because the Dark Souls games have never really focused on the character story. With the exception of Sekiro, it has always been the world that told the story. Bringing George into the mix was very worrying for From Soft fans.

Yet, somehow, From Software still created a good game. It isn’t perfect. Some of the enemy AI is a little wonky and easy to manipulate, and the overall difficulty seems to have dropped a little. However, they still created a good (not flawless) game, and people will be looking to buy Elden Ring items for years to come if past trends repeat themselves. From Software did the open-world thing, but they did it right, and that is what matters.

Actually, it highlights when other games have gotten it right. Take Far Cry 5. It is unmistakably a Ubisoft sandbox, but the way it is structured, the way it forces progression, and the way that the busy work is so optional that it is actually missable, is what makes it a great game. Not to mention the fact that the antagonists are probably the best Far Cry villains ever, especially when you consider that Joseph Seed was trying to save people by whatever means necessary (even ugly cultist means).

To hammer the point home, it is like when you go through a series of lovers/girlfriends/boyfriends, and you find that one that treats you right. It allows you to remember the others who were actually mostly nice to you and mostly treated you right. You have experienced the good and the bad so you are a better judge of what is good and bad.

Elden Ring Is Not a Perfect Game

They got a lot right, but this is important because “They could have gotten so much wrong.” It is not a perfect game, and there are some wrong things, but the sheer number of things they could have messed up is staggering. The fact they pulled off such a good game without dropping the ball is amazing.

We have entered a weird situation where if Elden Ring had introduced loot boxes and microtransactions (two of gaming’s most hated things), they would have found a way to redefine it and make it work for the player.

Though, with that last paragraph, you probably think this article was written by somebody who is a big Elden Ring fan, but that is not true. In fact, I believe that Bloodborne and Dark Souls 3 are still the top two FromSoftware games, with Elden Ring coming in third. I honestly think that going open world was a bad idea and that it followed the trend that all AAA developers seem to take. Yet, the fact that FromSoftware did it and still created a good, consumer-friendly, player-respecting game, speaks volumes about the company that FromSoftware has become. They haven’t fallen to the dark side of gaming like so many before them (Ubisoft, Dice, Bungie, Blizzard, etc.).