This Pekka Bridge Spam Deck 2022 is very powerful and In the Early game, you can start out the match with a bandit or a ghost at the bridge you can Play Royal Ghost at the bridge and apply pressure on your opponent and Make positive Elixir trades whenever possible and go on counter pushes immediately after. or

You can also play a magic archer behind your towers to see what big spells your opponent is playing. Ensure you protect your magic archer throughout the match and always use his long-range to your advantage Continue Reading »

This Mini Pekka Graveyard Electro Giant Deck gameplan is very simple, In Early game you should play fairly passively and just defend and counter push if you get the opportunity. Try to figure out what deck your opponent is playing so you know what lane you should play in and what cards you should hold onto so you can defend against their win condition.

You should also try to keep track of their win condition by counting the cards in between them placing it so you know when they have it back in cycle. Don’t be afraid of playing the Continue Reading » 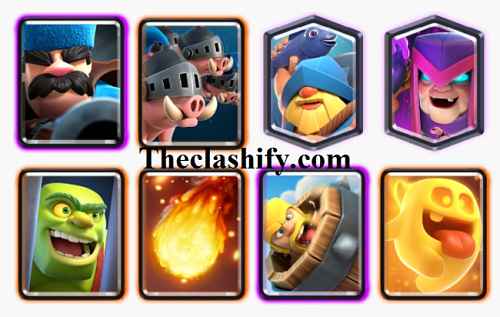 This Clash Royale Royal Hogs Hunter Mother Witch Deck has a 63.1% Win Rate, In this, The hunter and mini Goblin Cage are two great defensive unit that are capable of handling hog riders, ram riders, giants, golems, and Heal spirit is a great cycle card but more importantly, it’s a great support card for the Royal Hogs, Mother Witch or hunter.