Hello there, everyone! Today I’ll show you the Yeager Weapon Guide. There are various weapons in Yeager, and we’ve put together a list of Yeager Weapons to help you choose the best weapon.

Yeager is a monster-hunting 3D action role-playing game set in an extraterrestrial universe. You play as Yeager, an expert Vyderan hunter tasked with tracking down and recovering a stolen Vyderan item. Your journey will take you over the enigmatic Planet Ekors, home to the scariest animals and the darkest mysteries. As you work your way towards the Vyderan clan’s buried secrets and the vanished Empire, you’ll encounter terrible monsters and other species.

So, have a look at our Yeager Weapon Guide, and we’ll be publishing a Yeager Beginner Guide soon. 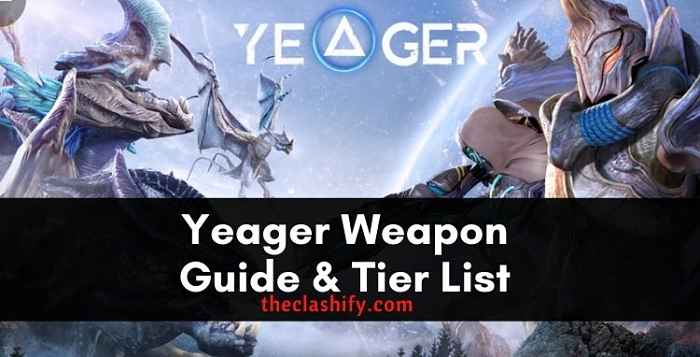 The Hunting Sword, the Vyderans’ most traditional weapon, allows the user to store strength and skills in order to unleash even more powerful assaults.

By dealing damage to the behemoth with forceful and heavy assaults, you can obtain overwhelming offense, build bursts of energy, cause interference, and seize control.

The Force Hammer is one of the pinnacles crafted by Vyderan craftsmen who revere strength. It is strong and brutish, furious and powerful. The astute makers recognize that weapons with just commendable weight are unlikely to be suited for hunting huge creatures. As a result, after years of deliberation, the “Flint” was born.

The Force Hammer’s performance has been improved by these small, combustible, explosive, and deadly things. When the Flint is lit by strong impacts, it can not only deal massive damage to the beast through explosions, but it can also pull forth the Hunter’s Spirit, strengthening his body and allowing him to block some of the beast’s assaults.

Hunters that want to combat gigantic monsters head-on with ferocity should use the Force Hammer. It draws the attention of the huge creatures to endure harm, unleashes unique methods by gathering impact to ignite the Flint, and provides a strong counterattack to the giant beasts.

Eidolon Spear is a ranged unit and Fight alongside the Eidolon and unleash its form-changing attacks to deal massive damage! Join us now to learn more about the Eidolon Spear’s attack combos.

It uses a variety of ammo and add-ons to do quick burst damage. The Flux Blaster has been modified by Vyderan artisans to fire strong ammunition such as piercing bullets, shotgun rounds, cluster bombs, and grenades. When outfitted with the correct add-ons and Talents, the Flux Blaster shines in a single battle. While dodging oncoming assaults, switch ammunition and shoot at your target’s weak spot to do massive damage. You can also help your teammates by using recovery bombs to heal them or providing cover fire. Regardless matter which role you choose to play, the Flux Blaster is a versatile and easy-to-use tool that is up to the task.

The best tip for the quick Fury Blades is to build up rage in order to unleash exceptional moves. Hunters who are familiar with the attack intervals and timings of the Fury Blades can cause more damage to the Behemoths thanks to the specific mechanism that allows them to unleash perfect attacks. Gorgeous, fast, sharp, chic, and deadly are all words that come to mind when describing the Fury Blades.

The Hunter’s wrath can be used to help him resist damage or to unleash a razor-sharp blade storm that deals many high-damage cuts.

On December 28th, Yeager’s fourth round of beta testing will begin (UTC Time).

Thanks for reading, Have fun